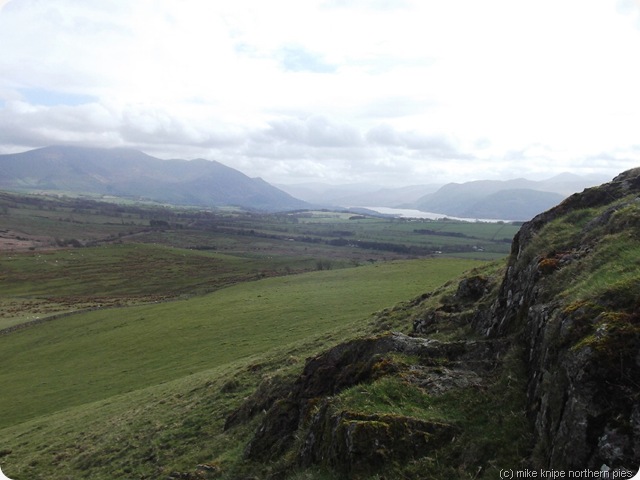 I was grazing through the www.hill-bagging.co.uk site the other night and it dawned on me that I had only twenty of Alf (where’s me pipe) Wainwright’s Outlying Fells to do, so I determined to go and bag one or two.

And so, this morning, me and superdawg found ourselves parking badly in the apparently deserted Cumbrian village of Blindcrake for an initial three mile trundle through pastures and ashwoods to the carboniferous delights of Clints Crags – Clints (with no apostrophe, so must be plural and nothing to do with cowboys) probably refers to the small limestone crags which identify this small hill as not a Lake District one.  It probably has a really good view of the lake District, but today, just the very edges of Skiddaw and Bassenthwaite Lake could be seen under the heavy cloud base and through the misty haze. 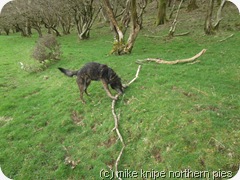 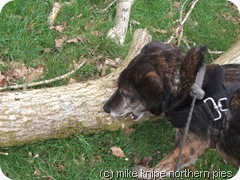 Bruno got the chance to run about quite a bit due to the fact that most of the fields were empty of any livestock. This lead to various brutal assaults on fallen branches, sticks and twigs….. 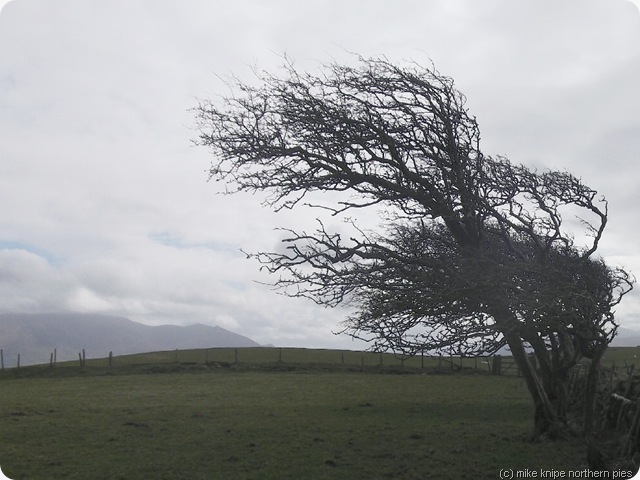 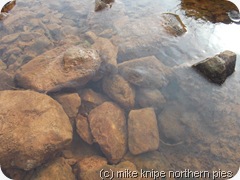 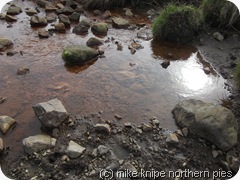 After a slow lunch in the car, we drove off to the nearby village of Bothel, which I judged unsuitable as a parking spot due to the overwhelming odour of manure. So we patrolled around a bit and found a cosy spot for the knipemobile only a few hundred metres from the Caermote Roman fort and, almost by coincidence, but not really, at the foot of Caermote Hill. I couldn’t find much information about the fort, except to say that there are two forts there and a few bits of roman road. The position of the fort is off the main roman highway to Carlisle but, apparently, overlooking the Western approaches to Bassenthwaite and within sight of a newly discovered stone circle on Binsey which, it is suggested, may be the reason for it’s position. It is noticeable that the fort is sited on a bog, however, and there is at least one very copious spring of orange-coloured water and there are other healthily productive springs around too. Not that I know anything about such things, but it strikes me that the siting of the fort could well be slap bang on an aboriginal sacred site although this sort of thing could well irritate the locals two knickers. (this is a measure of annoyance, not the number of pants owned by the locals) I mean ter say, these are heavily mineralised springs which haven’t suddenly just become full of iron or whatever it is turning the rocks orange… 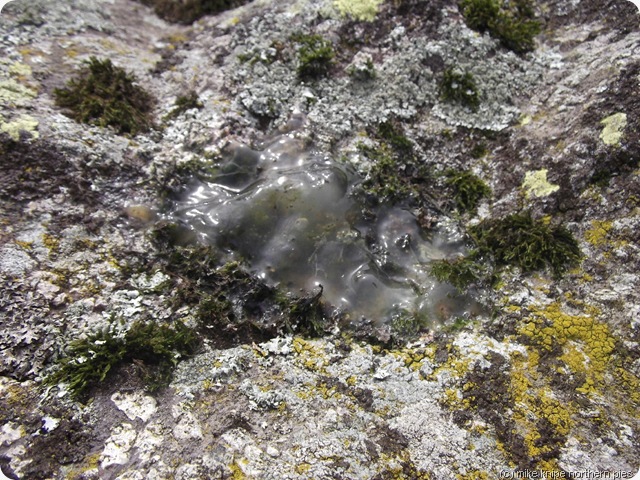 I had a look around the remains of the ramparts, but there’s not a lot to see. I did find some strange gunge on a rock, however. There were lumps of it round the back….  Frogsnot, probably….

Anyway, we heaved our fat bodies up Caermote Hill – a fine and rocky place with a cracking view of the coast and with a rock which sports four memorial plaques to deceased locals. Wainwright says there are two. But there are four. There’s another top a few hundred metres along the ridge, which we bagged as well. The barbed wire defences noted by Uncle Alf appear to have been replaced by a small gate. 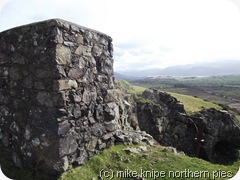 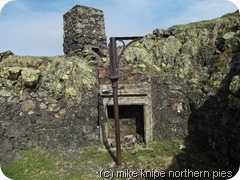 After this, I noticed a square-looking cairn on top of a hill overlooking the parking spot. We went for a look and found that it was, in fact, a chimney and there was a narrow flue leading from a small quarry which had an iron “thingy” in it. No idea what this is, but a local archaeology project says that a farmer informed the team that there was a shooting lodge or shelter built into the crag and this was the remains of that. Locals apparently call the place “Pepperpot Hill”. Seems reasonable.

Not many miles or contours were consumed today. I’m not even going to say what were the results….  (Not seven) (Or five…) dhuhh…  I’ve only got seventeen Outliers to do now… 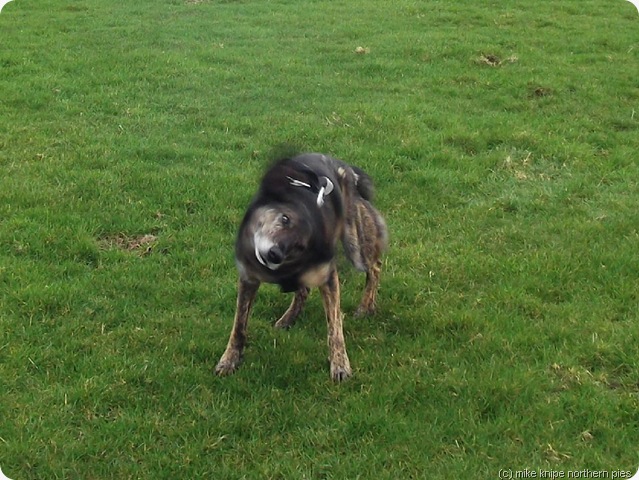 Two hills there that I've never heard of!
Don't you ever wish your life had nothing more stressful in it than finding the ideal stick? I certainly do!

Looks like you had a wonderful time Mike.Goodness knows what you are feeding Bruno but by the choice of his sticks indicates it is mighty awesome stuff. Could do with a drop of that myself. My Bob Martins are just not up to the job!!!!!!!!!!

Dan - Bruno is moutling just now, so he spends a fair amount of time rolling about and shaking. It could be religious, I suppose, but more likely just itchy...
Chrissie - He's becoming more obsessed by sticks with age. He chewed great lumps off a fence post the other day.
Alan - Star jelly is possible, although it seemed more snotty, if you'll pardon the..er..
We had a blast, Dawn. Not many calories used, though. Forget the Bob Martins, try "Bounce" and biccies. It gives you an irresistable urge to chase rabbits, though....