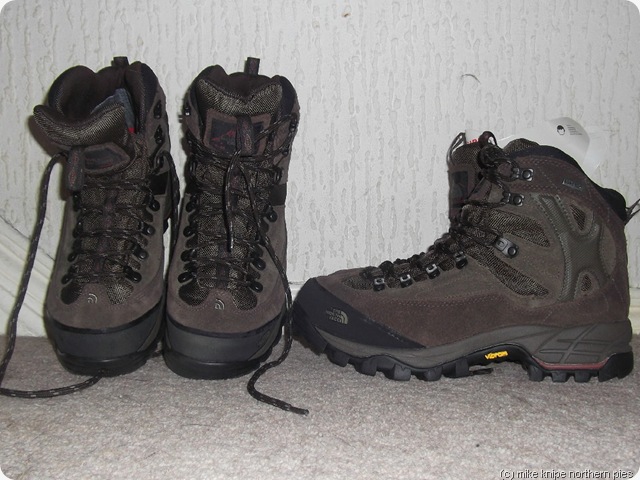 Those few of you who have read and will remember the Goodies Christmas Album from nineteen seventy blob, will recognise the title of this post as the name of a firm of solicitors….

Anyway – suddenly I have loads of pairs of boots.

Some time ago, I was asked if I would like to review stuff for Ukhillwalking (note well that I’m not reviewing stuff for the blog) and, never a one to refuse hillwalking gear, I said I would.

A bit later, I was told that TNF wanted to send me some boots.  Fair do’s – all my boots are now leaking, except, perhaps my venerable Scarpa’s which I only wear in the depths of icy winter when its require to wear spikes – cos they is stiff, see?

Anyway, the boots never arrived and, eventually , I mentioned this to Sarah at Ukhillwalking. A flurry of emails flitterred around the ether. Boots must have been despatched because….. 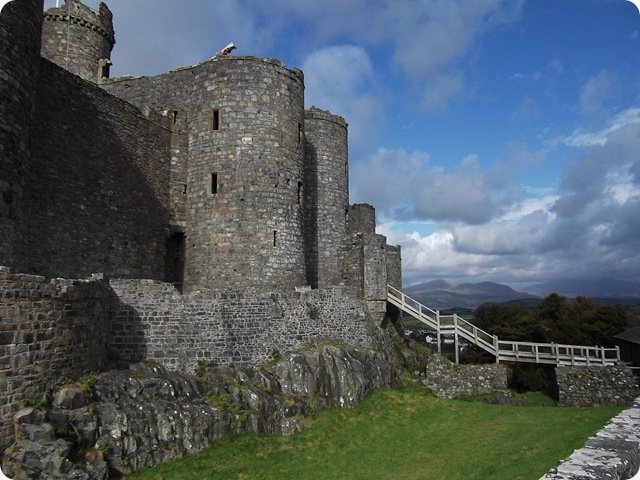 Suddenly, a few days ago, a white van appeared at the knipetowers  main drawbridge and the chap announced the arrival of a pair of boots from Belgium. Good-oh. They look very nice. I’ll be trying them out shortly and they’ll likely go on next year’s TGO Challenge (If I get on) – or otherwise on various backpacking trips.

Then , even suddenlier, another white van appears across the moat and the man with the van proudly  announces the  arrival of a pair of boots from Belgium. I accepted, of course.

Justaminnit, though – hasn’t this already happened?  I now have  two pairs of identical TNF boots – the first were despatched in November and the second, in September. Where’ve they been, I wonder. I’m just waiting to see if they want a pair back.

I’ll be doing a report for Ukhillwalking.com as soon as I’ve given them a bit of a bashing testing.

Looking forward to your comments; I have a pair of North Face Hedgehog gtx mids.They are not water resistant. With current foot problems I am reluctant to switch over to my heavy weight deep winter mega boots, Aku Edge's.

I'm glad I've not got your heating bills with a pile like that! Or do you just live in one wing?
That moat looks like it needs cleaning out!

Dawn - I'll be using the boots tomorrow, and, maybe for a bivi over theweekend. They look very chunky.... which is a good start...
Brian - I never did potery, it was too Ruddy 'Ard (see what I did there... Tommy Atkins this an' Tommy Atkins that...
Al How do you know about the piles?... oh yes, I see.. dhuhh....

Mind you I've never been a big fan of his cakes but there you go....

Make sure you don’t throw 2 right foots in the car Mike. it’s too cold for barefoot walking.

Ah yes, Alan - It had occurred to me that this could well happen. There's so many pairs of soggy boots in the boot of my car now, that selecting a pair is getting like matching up socks.

Looking forward to reading the reviews.

Make sure you get a pair, though. Reminds me of the (probably not true) story when more boots were ordered for the soldiers fighting in the Crimea (I never promised it was topical). 2 ship-loads were sent - one full of right boots, the other full of left boots (you know where this is going, don't you). Of course, one sank .....

Jules - At the moment, I'm only using one pair so that (unless they ask for a pair to be returned) I can do before and after pics. So far, one pair has done just ten miles. Once they're a bit batterred, the danger of turning up somewhere with two left feet diminishes. I have so many pairs of boots, though, that a pair might not necessarily.....