Walking the English-Scottish Border – The Route(s) and Other Stuff 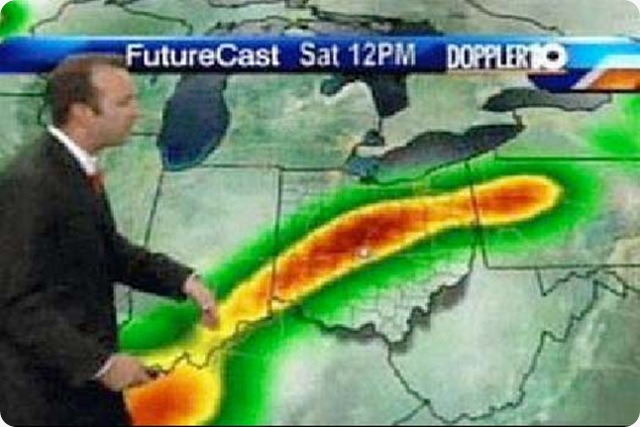 Now that its been a few days since I finished the walk along the Border, I thought I would put down some thoughts which may be useful for anybody else who is considering this madness  undertaking.
There is no set route. It’s not an official Long Distance Walk (although it has a lot of potential). But there is, of course, the Border itself. This is a definite line which runs from the Solway Firth, along the River Sark, East-West on an earth bank called the Scots Dyke, along the River Liddel and the Kershope Burn, through the Cheviot Hills then through the arable countryside of North Northumberland and the Borders, and , along the River Tweed, finally turning North a few kilometres east of Berwick to the sea.
As there’s no set route, people are free to do whatever they desire. I think its best that this remains the case.
Day 1 Carlisle to Longtown 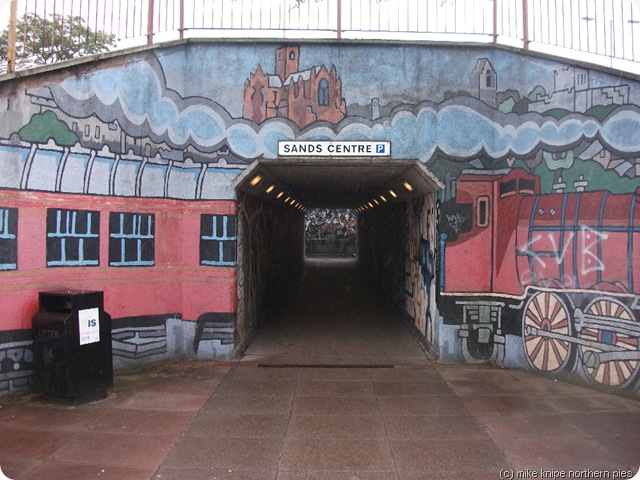 I started at Carlisle. The nearest town to the start of the West-East border is Gretna. Starting here would provide the advantage of an opportunity for a quick marriage before setting off. Other than that, it seems that there would be much road walking to start with. This may not be entirely true. (See Day 2) I would need to explore this further.
But why did I start at Carlisle?
1) Its very easy to get to from Chez Knipe. It has a railway station strategically placed on the West Coast main line.
2) the Cumbria coastal path leads easily alongside the River Eden to the Solway, where the Border is.
The path by the Eden is well signposted and waymarked and the stiles and footbridges are all in good order. I probably left the riverside path a bit early but the eastward route from Rockcliffe was on quiet lanes and I soon joined a path on the a bit of disused railway line, which was very nice. More roadwalking followed to Arthuret and more field paths to Longtown.
Longtown has pubs, shops, cafes and beds and there are campsites on either side of the Border within a couple of miles. Its a good place to stop.
I was happy with my route for day 1
Day 2 Longtown to Newcastleton 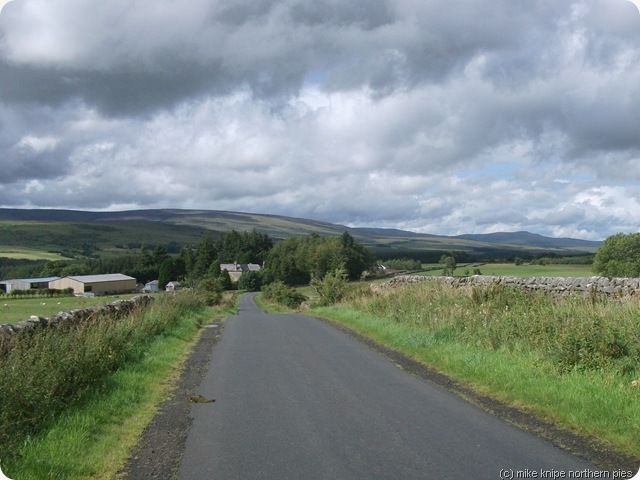 I messed up the navigation at the start of this. It seemed like a good idea at the time, but lead to a cul-de-sac as far as off-road walking was concerned. A lot of road walking followed, with bits of bridleway on the English side.
I noted, at the Border crossing near Canonbie that the Scots Dyke has a footpath sign pointing to it. If there’s a pathg along the Scots Dyke, this would be very useful for a Gretna start.
But, from Longtown, the English side of the Border may offer footpaths for use, although most of these go North-South which is less than useful for an West-East route.
The Waverley line – to old railway route from Carlisle to Edinburgh is not open for walking on , at least the parts I saw weren’t feasible. This is a pity. It goes to Newcastleton….
The English side also offers the alternative of following the Border more closely along Kershope Burn. this is all forest roads and would miss Newcastleton and heads directly for Kielder. This might take an extra day for mortals like wot I am.
Newcastleton has beds, pubs, hotels and expensive but friendly camping. It may be possible to camp for free alongside the riverside which is short green grass and a local walk.
Day 3 Newcastleton to Kielder 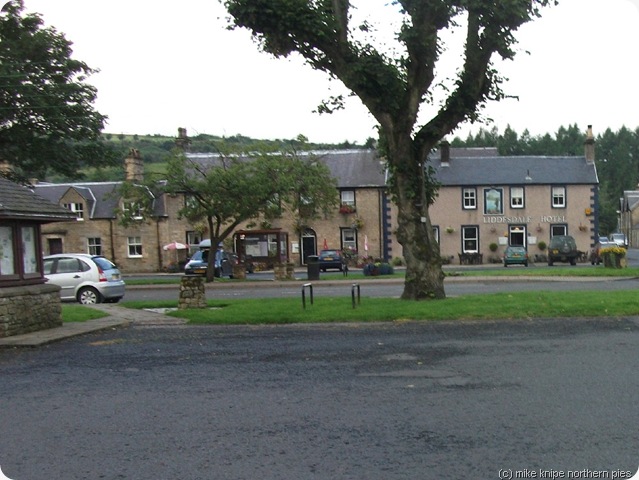 This was almost all forest. There’s nothing much to be done about this if you want to go to Kielder, although there are several options through the forest. Forestry Commission signage is aimed at cyclists who know the place already, it would seem. I found the signage confusing. the Border route appears to be only signposted in one direction and is often counter-intuitive.
Despite the map, there is no path over Larriston Fell. If you go this way, you are warned, strongly, that it is very very rough going indeed. It seems to me that any clear hilltops surrounded by commercial forest are a sea of tussock, lank heather and bog. I suspect its because there are no sheep to trim the herbage. There’s a new mountain bike track which goes to Kielder from Bloodybush. This squiggles about a bit, but its much easier than Larriston.
Day 4 Kielder to Byrness 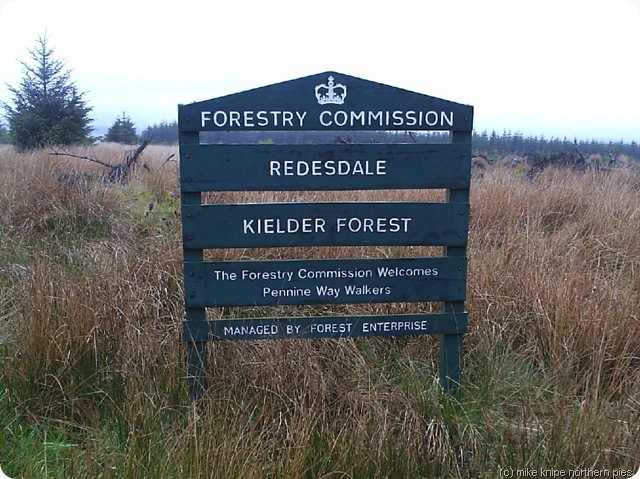 There seems to be three options:
1) I followed the bridleway from East Kielder to Catcleugh. This was an absolute nightmare. Its almost as rough as Larriston, but goes on much, much further. Some of the bridleway is impassable. It is, however, the shortest route to Byrness, if thats where you want to go.
2) The toll road to the A68 near Byrness followed by a quick hop up the Pennine Way. Probably the easiest. Its almost all hard surface forestry road, though.
3) The border ridge to Carter Bar and beyond.
This is rough stuff. It is the purest route, sticking close to the Border. It visits the Kielder Stone which was a meeting point of the Marcher authorities for the dispensation of local justice, so its a significant point.
It also visits the tea van on the Border at Carter bar.
You can drop down to Byrness either before or after Carter Bar.
Its a fine route, but its a very long way to Byrness and an extra half day might well be needed.
It would be possible, of course, just to continue along the Border and bypass Byrness altogether. Tough guys would do this.
Day 5 PW from Byrness 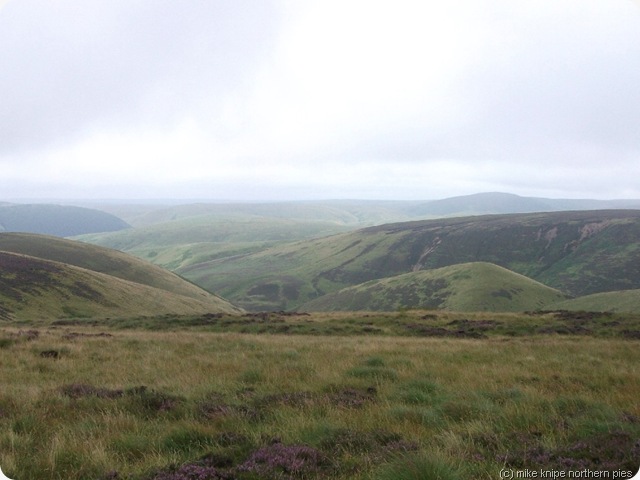 Follows the Pennine Way. Much easier walking from Byrness onwards. Forest view have a van/bus which will pick you up from Trow for a small consideration, thus avoiding the need to wild camp. There’s also accomodation well off route at Barrowburn.
An alternative would be to drop down along one of the cross-border roads – Dere Street goes close to Jedburgh and The Street does similar stuff. This might be more useful for finding a camping spot or for very bad weather.
Day 6 Beaumont valley to Town Yetholm 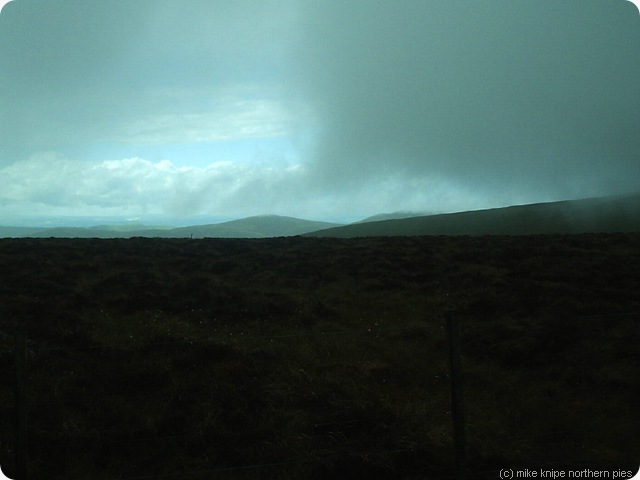 Should have continued following the Pennine Way, but I dropped down the Beaumont valley to Town Yetholm.
Its also possible to drop down into the Colledge valley.
Town Yetholm has beds, a campsite, a hotel and a good shop. Kirk Yetholm has it’s hotel. Informal camping is possible beside the river in between the two.
Day 7 Town Yetholm to Twizel 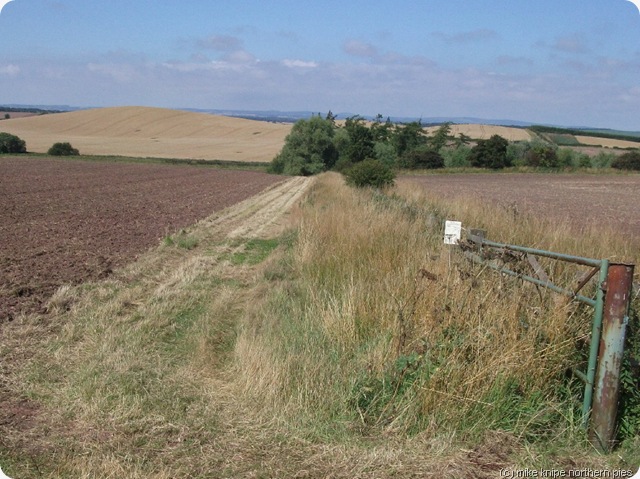 The path from Town Yetholm to Hoselaw is open and easy to follow. After that there are few paths on the Scottish side of the Border and, after some initial stretches of walking on very quiet lanes, there are mainly good paths on the English side, with a few notable exceptions where there are some serious issues about blockages.
Cornhill on Tweed has a small shop and an hotel, but Coldstream is much bigger and has a supermarket, many hotels, pubs, B&Bs and girls in tight shorts……
The signed path to Norham/Berwick (10 and 20 miles respectively) appears not to be a continuous path, the railway bridge over the River Till being dubious as a  crossing at the moment. CI’ve asked Northumbria CC about this)

Late edit: I just discovered that you can cross the disused railway bridge over the River Till by a permissive path. This misses out the junction of the Tweed and the Till and a bit of riverside path but avaoids a couple of miles of road walking beside a busy A road. So it's better, see?
Day 8 Along the Tweed to Berwick 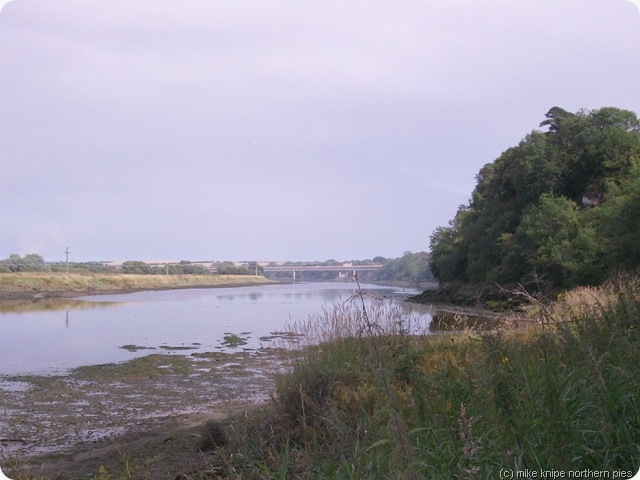 Riverside paths by the Tweed are generally fairly good and give a fine route into Berwick. The Scottish side of the river appears not to have a continuous route. I don;t think there’s a sensible alternative to this.
There are shops, pubs and beds at Norham and Horncliffe and a campsite off route a bit South of Horncliffe.
The locals are specially friendly.

And that’s it. I guess that, depending on the route, you’d be looking at 7 to 10 days for this jaunt. There are no rules, remember (that’s a rule I just made) but you have to stay as close to the Border as your concience demands.
If,of course, you happened to be walking around the coast/perimeter of England (?and Wales) – you really ought to stay on the English side of the line, eh?
I’m off to do something different now….
Posted by Mike Knipe at 15:18

An interesting route which I enjoyed reading though sounded fearsome in parts.

I like the idea of a Gretna start, with a quick marriage. Trouble is, I'm married already so that might be a problem.

Its not too hard, Phil if you go the right way! The really rough bit is that Kielder bridleway, otherwise its not too bad.

Thanks Mike. We enjoyed your Postings of the walk and the review.
Definitely not going to Gretna though, it's far to dangerous.

Hello Mike,
You can walk the Scots Dike from west to east. I do it every year, it being somewhat of a tradition now as I have done it for twelve years, usually in April. Interested in your route. Have you got a map of it as I'd love to do it myself before I curl up my toes.
I'm really interested in the Border Reivers so to walk the Line would be great. I've always thought there were too many obstacles, i.e irate landowners.
Northern Pies? Have you tried Gregg's sausage, cheese and bean bake? Great!
Regards,
Tom Moss.

Thanks for the info Tom - I'm going to have to walk the Scots Dyke, I think.
As for maps - if you look back at the postings, there's a roughish map of each day's walk.
This is just one possible route, though - there are alternatives and variations available.
I didn't come across any irate landowners - just some neglected paths. Everybody I met was, in fact, very friendly.
Its Northern Pies because its Northern, and its meaty, beefy, big and bouncy! Its very Pennine, y'see....

Did you know the old name for Newcastleton is Copshaw Holm?

There's a song. and there used to be a fair - there still might be.

The fiddles play briskly at Copsawholme fair, JJ. I believe there's some kind of annual music do involving fiddles and pipes..(?)
Incidentally, my site stats indicate an unusual level of interest in Border walks - I suspected a Ukranian clicking factory and was about to suspend some of the posts to ittitate them - I've done it with two posts already. They don't like it y'know..

hi - I just came across your blogg & found it very helpful, if one wanted to travel from London to Edinburgh by rail but get off at some point & then physically walk across the border would Gretna be your choice? Love to hear your thoughts - please email me chantalbakker22@gmail.com