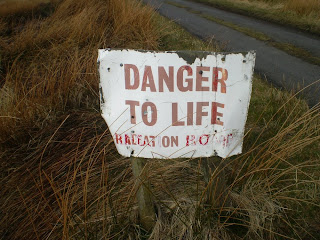 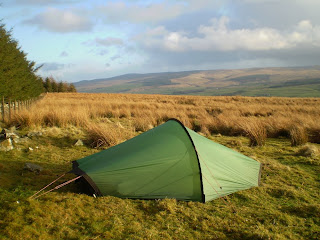 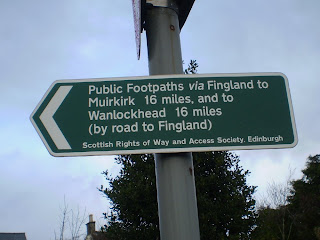 One of the skills that all TGO challengers need to learn if they intend to travel to and from the event by public transport is the diplomatic return of all the spectacles, sandwhiches, small babies and pet dogs which stick to the outer eruptions or "straps" of the fully packed rucksack as you blunder up the central aisle of the Virgin voyager whilst it's accelerating and you're trying to concentrate on finding your reserved seat C17A (which will have somebody sitting in it who will growl as you approach)
And so, with unreserved seats on a train over half an hour late due to a goods train in the way , I arrived at Sanquhar and sought out the campsite. It appeared to be somebody's back garden and they were out and so, instead, in the tipping rain, I set out for the hills to find a nice somewhere to camp.
It stopped raining and, roughly five miles outa town, I spied a bit of untussocky grass with a big view and a water supply only slightly affected by a dead fox, set up camp, had me tea and just chilled for a bit.
A starry, moonlit night, it was, with only the distant lights of a remote council estate called Kirconnel glinting romantically in the distance.
In the morning there was ice on the tent.
The sleeping bag worked well
I was chuffed.
I went and bagged Cocker Hill, defended as it was by a rather fine array of tussock grass and bog.
I followed up this success by the bagging of the very fine, but grassy Kirkland Hill, a Marilyn of almost no note at all, but all the better for that.
And so, down into the depths of a deep, dark forest to find my bedding place for the night - which I found in an enorous clearing by the Poldive Burn.
The first 20km of my TGO challenge training walk was done. No rush, no route-marching; a saunter, in fact.
But what about the "Danger to Life" sign? Bit mad , that - somebody didn't want a communication mast up one of their hills, I suspect. I think the danger may have been exaggerated a bit.
Posted by Mike Knipe at 22:27