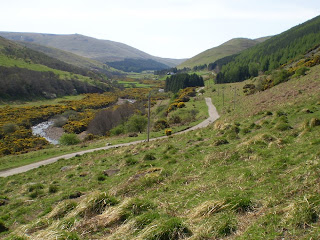 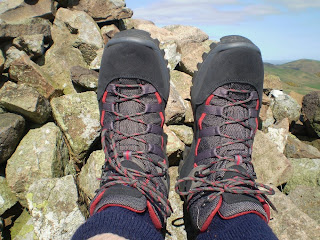 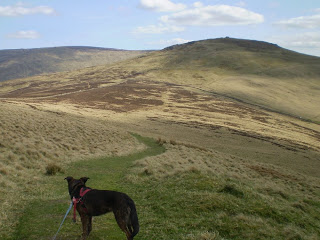 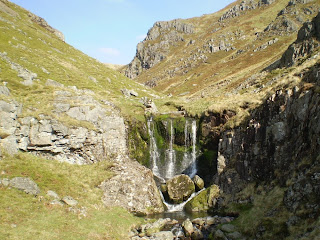 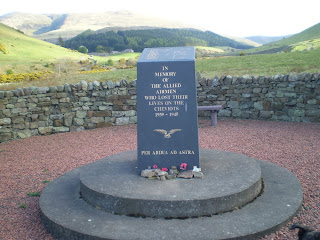 I’d intended to do this walk on several occasions over the last few months and been prevented from getting anywhere near it by things such as not being able to find my garage keys, bits of urgent landlording stuff, and a blizzard. Yesterday dawned fine and clear and, especially, blue, so I had the traditional wait for the traffic on the Western bypass to clear and then hurtled off up the A1 (and other roads beginning with “A”) to Hethpool at the foot of the Colledge Valley right smack bang on the English/Scottish Border. This might seem a long way to go for a day walk, but really, it’s the same distance from Chez Knipe as Buttermere, Wharfedale or even Jedburgh and, if you time the journey, is a very quick trip.

There’s a car park at the foot of the Colledge Valley beyond which you’re not supposed to drive. I have to say that Colledge Valley is a specially beautiful corner and does well without the traffic…

The objectives for today were to bag certain hills, walk along the Border ridge, visit Hen Hole and then walk back down the length of the valley. In me new boots.

The first target was Great Hetha – a steep, rounded, grassy lump with a hillfort on the top (most of the local hills have hillforts). It went well. On the top, I changed into shorts, adjusted the laces, admired the boots for a bit, admired the view for another bit and then went off to find the Border Ridge which wasn’t too difficult as there’s signposts pointing to it all over the place.

I wandered along the Border as far as the junction with the Pennine Way, bagged Black Hag (which is green and doesn’t have a hag) – crossed the Border to bag The Curr and then continued southwards to The Schil – and then on to the 20 mile hut on the PW. On the way I met a chap with a golden retriever, whom Bruno decided to play with and dominate at the same time – which the other dog abjected to… and there were almost canine fisticuffs if human intervention hadn’t..er..intervened…

The chap with the dog was just finishing the PW and his son, was some way behind having also bagged The Cheviot (the brave fool!). I met the lad a bit further on and told him that he was just about to cross his final PW bog. He asked after his dad. He looked a bit fragged, but his pace up The Schil was fast. Only a young lad…. In the words of Linda Lovelace, “It fair brings a lump to your throat”

Anyway – on to the Twenty Mile Hut where we paused to read the guestbook which was full of stuff such as “Just spent the night here drinking brandy and whisky to take our minds off the fact that we’re cold and covered in spiders.” Poetry. It fair brings a lump……

On to Hen Hole – a deep gorge just next to the PW and, probably the most interesting way to climb the Cheviot. Or is that via Bizzle Burn. Anyway, I breached the waterproofness of the boots at this point by going up to me knees in the beck.

Finally, we hammered down Colledge valley, pausing only for a moment or so at the RAF war memorial at Cuddystone. This is inside a sheepfold-like structure and lists the allied air accidents in the Cheviots during WW2 – quite a lot of crashes. This is a really good place for anybody who needs a spot of quiet reflection.

The homeward journey back down the A1 was just 90 minutes. No traffic, y’see.

But what of the boots? I think they’re rather fab. I got some Berghaus Explorer trail Light boots – and they’re very comfy, grippy and, at the moment, very waterproof (outside anyway!)

I also got a compass from Mountain Warehouse as my Silva has developed an enormous bubble and thinks that magnetic North is sometimes in New York – and under “BOGOF” rules, I also got a new survival bag for nothing… and a pizza and a short sojourn in St Cuthbert’s shrine in the Cathedral (aka Cuddy.. as in Cuddystone as it happens)

And me TGO RAB fleece just arrived…..
The walk was 15 miles and 3000 feet of climbing – so we appear to be cooking on gas just now, which may well be a positive indicator for the TGO…
Posted by Mike Knipe at 11:22

Linda Lovelace...you're beginning to show your age - she must be a granny by now (lol)!

Looks like you're just about ready for a wee walk across Scotland.

Forgot to say...thanks again for the bridge photo - now posted!

Cheers fatdog, I am just about ready for a bit of a stravaig and, just like LL, I'm gagging for it. Actually...er...maybe not....