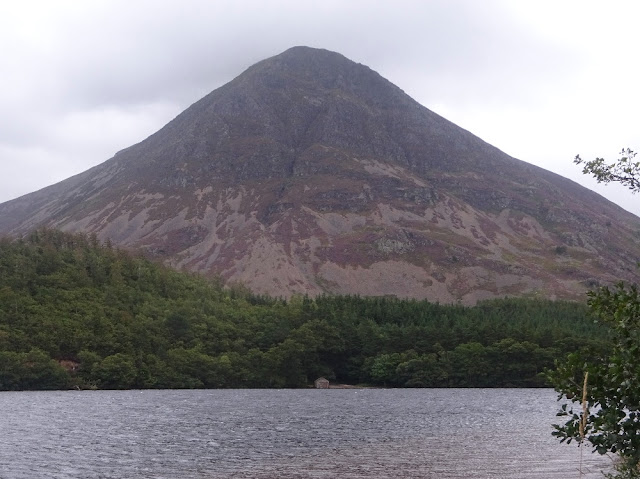 The picture above isn't, of course, of Melbreak. It's Grasmoor but as Grasmoor appears in most of the views on this walk, and the fact that it actually looks a bit like a proper mountain, I thought I'd put it in as the introductory picture. Other than this one, none of the pics in this post appear in any kind of logical order. This is because I have been defeated by Blogger's software which doesn't seem to like me to mess around with the order of the pictures and, if I do, refuses to let me write any text. So I gave up.﻿ 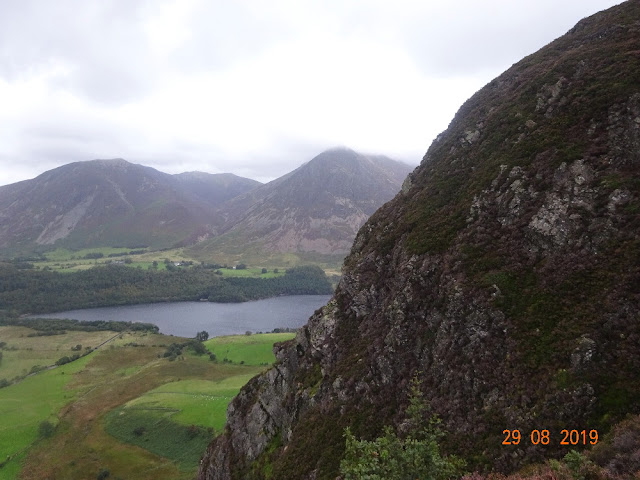 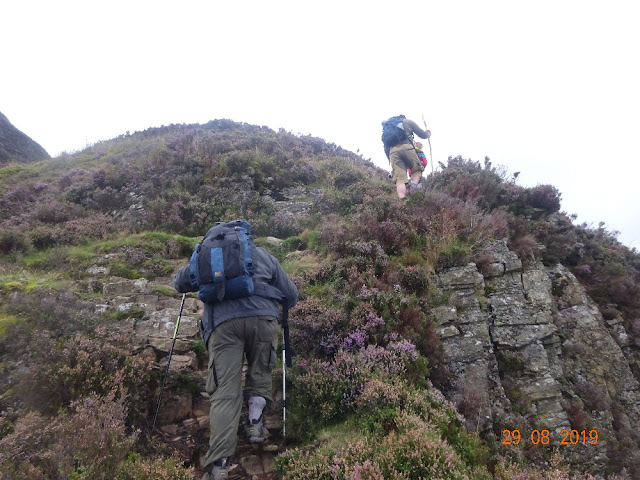 Me and Lucky The Dog eventually appeared at the National Trust car park at Scalehill Bridge, which had lots of empty spaces and a pay-and-display charge of Seven English Pounds and Fifty equally English pence. However, as the machine would not allow any coins to be inserted, I didn't pay anything. This cheered me up enough to climb Brackenthwaite Howe, a diminutive but ever-so-slightly Tump right next to the car park. This has a fine view of Grasmoor, Crummock Water and Melbreak. There's a picture of it somewhere in this blog post, I shouldn't wonder. 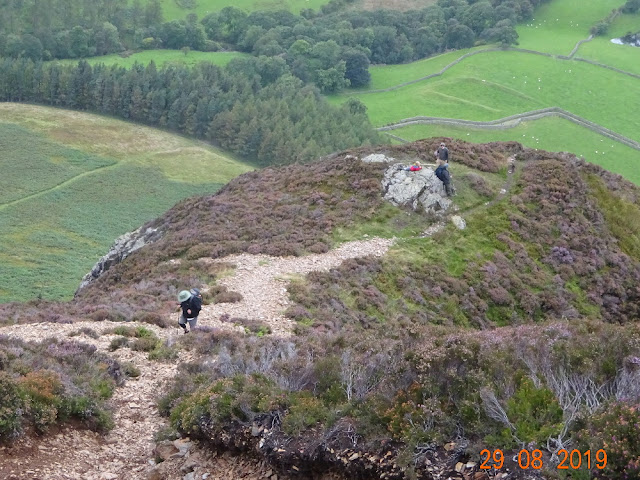 Following our successful conquest of the mighty Brackenthwaite Howe, we wandered over by the choppy Crummock Water to the foot of Melbreak, where it was suddenly lunchtime. An egg and tomato butty and one of those Lidl "Portuguese" eggy custard thingies with some coffee plus a bonio (for the dog) and we launched ourselves up the scree, eventually catching up with some stragglers of a family expedition up the same hill. (Had it been a different hill, there'd have been consequences in that somebody would have been on the wrong hill, innit?) The family included a man and his very young son, an old chap, a "senior" lady who seemed to be the one who knew what she was doing and, somewhere up ahead, a Mum and another son. We heaved our way up the scree, two steps up, one step down and at a flat bit on the climb, they let me pass. I found the Mum and the other son at the summit cairn, trying, as best they could to shelter from the lively and chilly rain-spotted South-Westerly. As it was nithering, this was no place for a banana or, indeed, for socialising, so we left and climbed up to the South top and down to lower levels where I destroyed the integrity of my banana and LTD did some canine archaeology. There's a picture of this somewhere here as well, I expect. 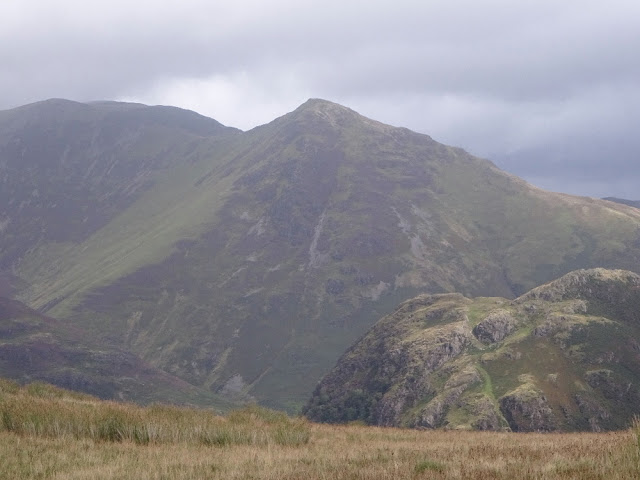 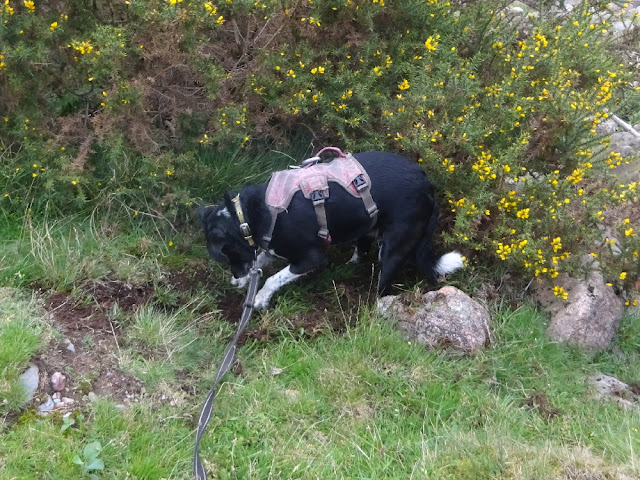 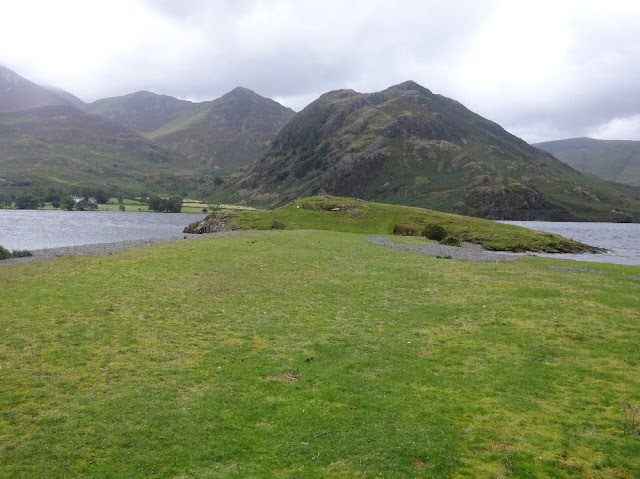 The return was made via a shoreline path which revealed one or two rather nice camping spots, if such a thing as camping might be allowed around here (probably drawing frowns from the "authorities" and the local farmer, I should think.) There could be a picture of the best of these spots.
My return along the shore path happened to coincide with an escalation or increase in the blusterinous of the breeze, such that it began to lift sheets of water from the surface of the lake and spray them all over me and the dog. Obviously, had the dog not spent so much time investigating the likelihood of an iron age settlement next to a gorse bush at banana-time, we would have been ahead of this event before it started and, thus, remained dry.  I'll probably restrict his chewstick allowance for a while as a punishment. 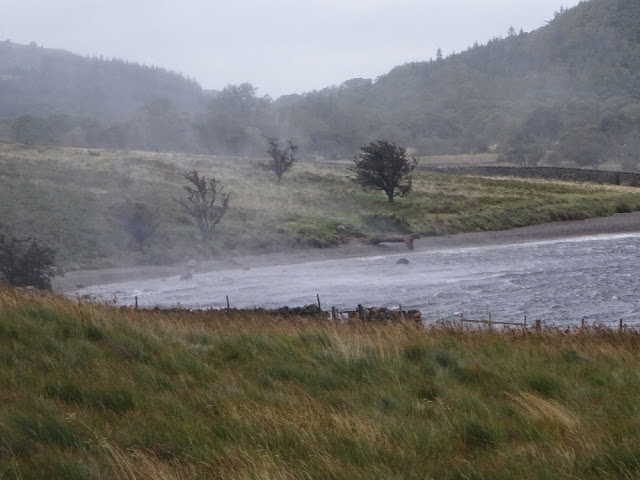 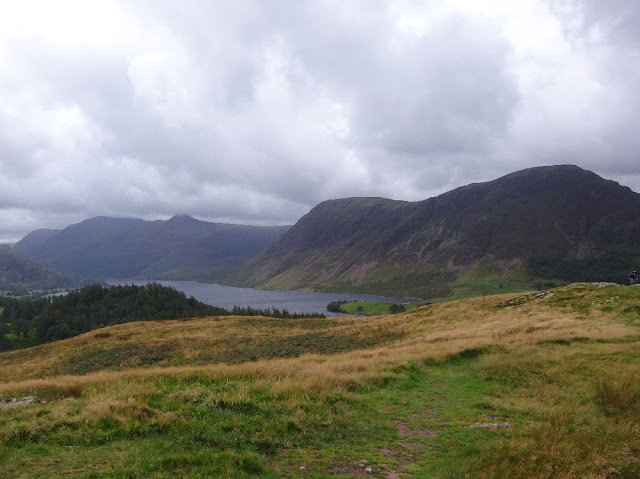 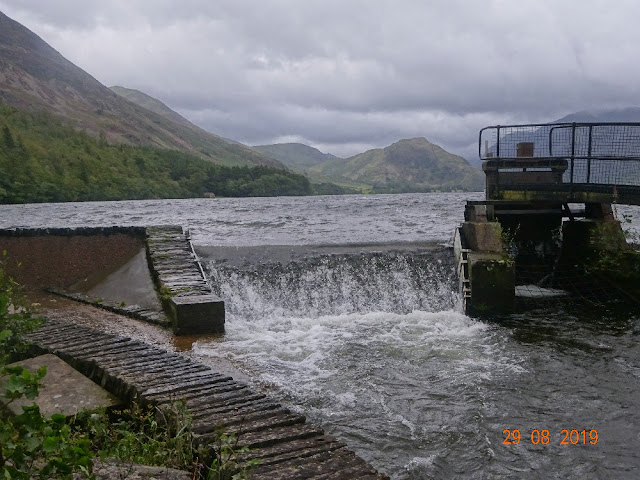 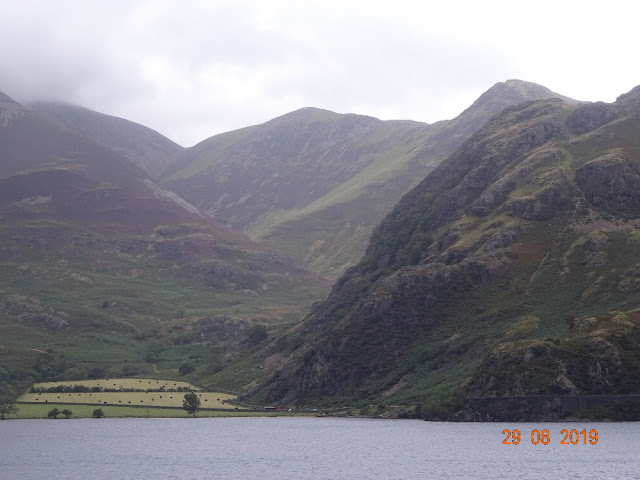 The walk was about 8 miles or something and with 2500 feet of up, some of which was arduous but quite good fun.  If you select the pictures and re-arrange them in a random fashion, there's a slim chance that they may fall into the order in which they are supposed to appear. Before you try this, you might wish to contact William Hill bookies to see if they'll give you some attractive odds of this happening.
Posted by Mike Knipe at 14:04

I think the Blogger Team (working hard to improve your blogging experience) seem intent on destroying what little credibility blogger has left.
Nice pics by the way. ...even if they are out of order.