Mizzly Stuff in the Howgill Fells 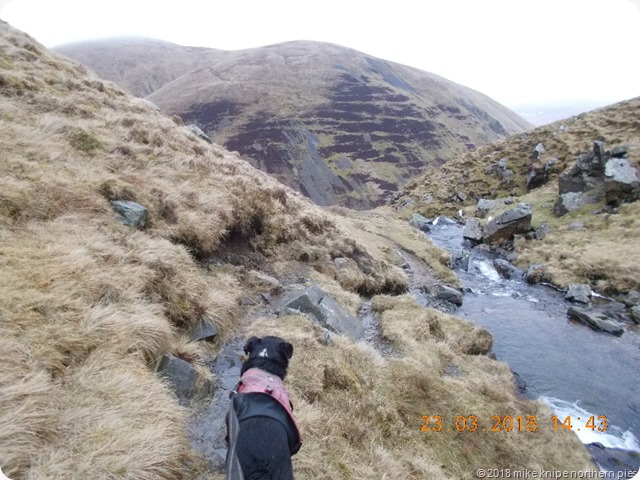 This was another TGO Challenge preparation walk – the idea being to do lots of contours. As a fairly gentle [koff] introduction to this, I chose the Howgill Fells – one of the Howgill classic walks from Sedbergh to The Calf, Cautley Crag and Spout returning via the clarty bridleway from Cautley to Sedbergh, but with some additional contours added by the inclusion of Yarlside. This would all add up to about 1000 metres, which is only exceeded by four of the thirteen days of my TGO challenge route at 1350 metres. 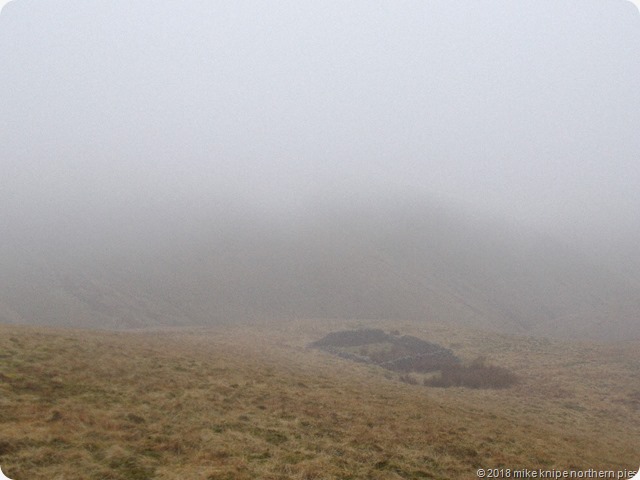 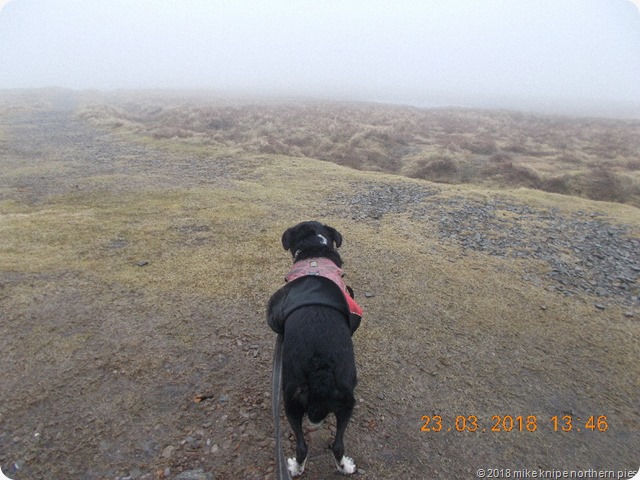 So, me, LTD and The Bro marched out of Sedbergh on what is now the Dales High Way route (not sure when this happened) – and we heaved our way up the first contours into the mist and drizzle. Navigation to The Calf is very easy since the path is heavily engineered and surfaced for much of the way and reliably turns up at the trig on the top even though it seems, at times, in the murk, that it’s going too far downhill at one point. But it isn’t. 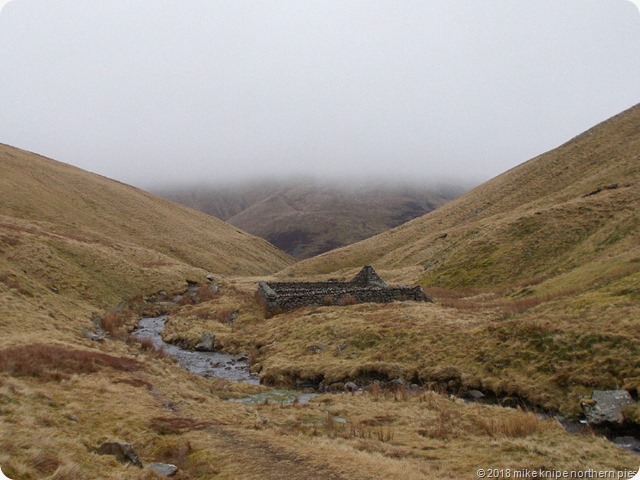 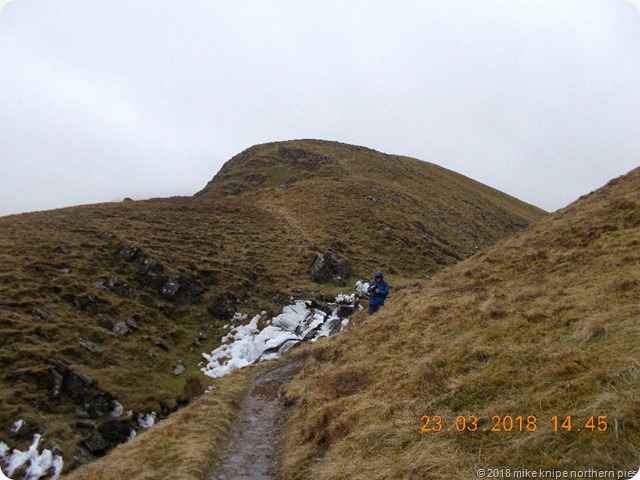 It was far too nithering to be sitting around lunching at the summit, so we did some proper navigation and turned up an short time later at the posh arty sheepfold in Force Gill (not in the beck, which is, of course, Force Gill Beck). This seems to be a nice place for a bivi or overnight if its a bit windy although sheepfolds always seem really attractive places to lunch out of the wind till you actually get there and then they’re usually draughty and often quite wet, having firtly interfered with the local drainage when they were first built, and, secondly, having played host to generations of sheep whenever it was they were actually used for gathering sheep. Still, it was out of the worst and as my chicken, tomato and mustard butty slowly disappeared, the clag, glaur and mizzle seemed to be lifting. 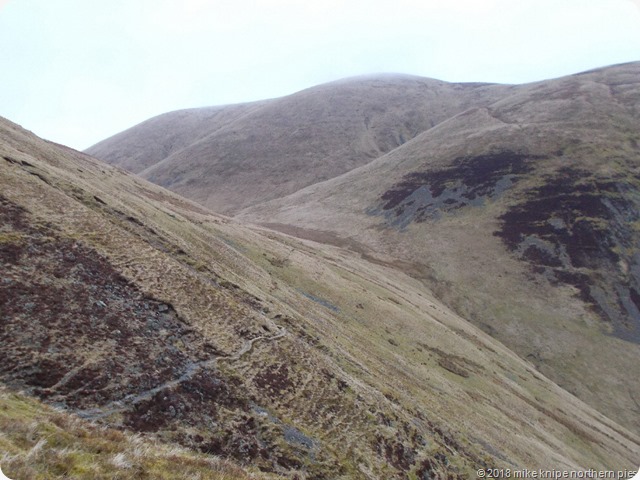 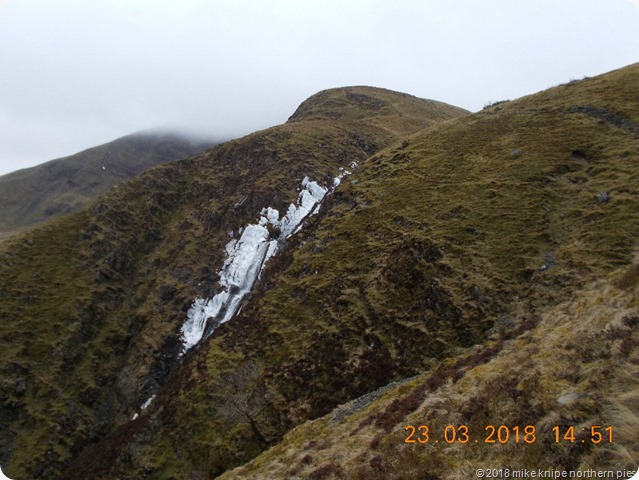 We passed the top of Cautley Spout which was still wearing a bit of icing and followed the high-level path to Bowderdale Head, climbing the apparently huge and beetling grassy buttress of Yarlside by a thin trod which climbs next to the final re-entrant of Bowderdale Beck, a steep gully, speckled with mouse-holes, complete with entrance-piles of mouse poo. LTD is often interested in mice and has eaten one or two in his time. On this occasion, when I introduced him to one of the holes, he just ate some of the poo.  Dhuhh…. Should have let him have some of my chicken.. 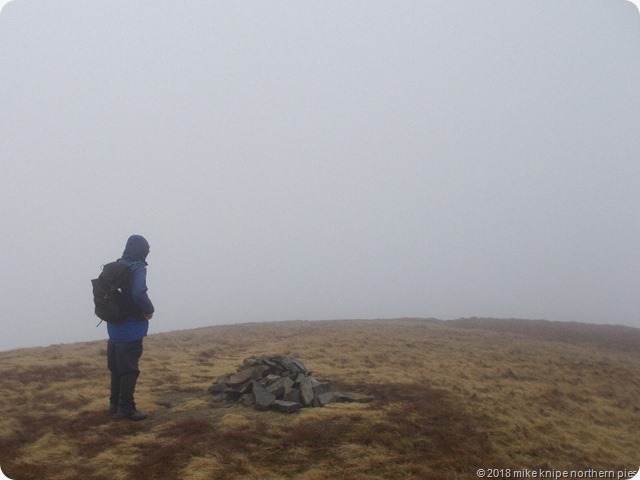 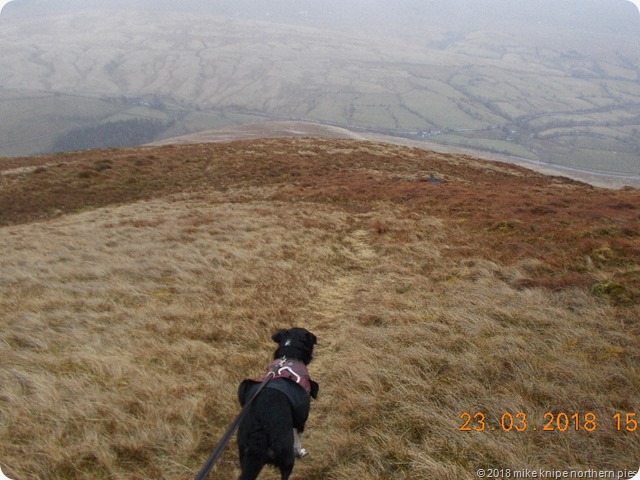 We descended to Cautley by the long ridge to Ben End, found the bridleway footbridge, which is not quite where it says it is on the map, and plodded back to Sedbergh on the bridleway which was quite clarty and is now Wainwright’s Pennine Journey route. There were some very pregnant sheep on the bit. I must say, I do try to avoid going into pastures with lambing sheep with a dog at this time of year. This time the sheep seemed fairly relaxed about LTD, or maybe they were too heavy to move very far very quickly. I don’t think any harm was done, though – LTD was kept really really close and we did give the ewes time to waddle out of the way. 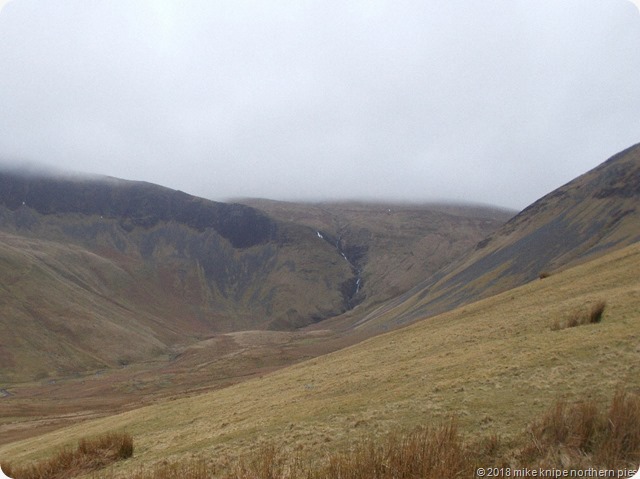 It was 11 miles and 3600 feet of ascent, which was reasonable progress, I think.

There’s a map below in case anybody…..

As a footnote, I would confess to being a bit knackered after this walk, although the merlot I got at Kirkby Stephen Co-op later on helped with my recovery – thanks for asking. 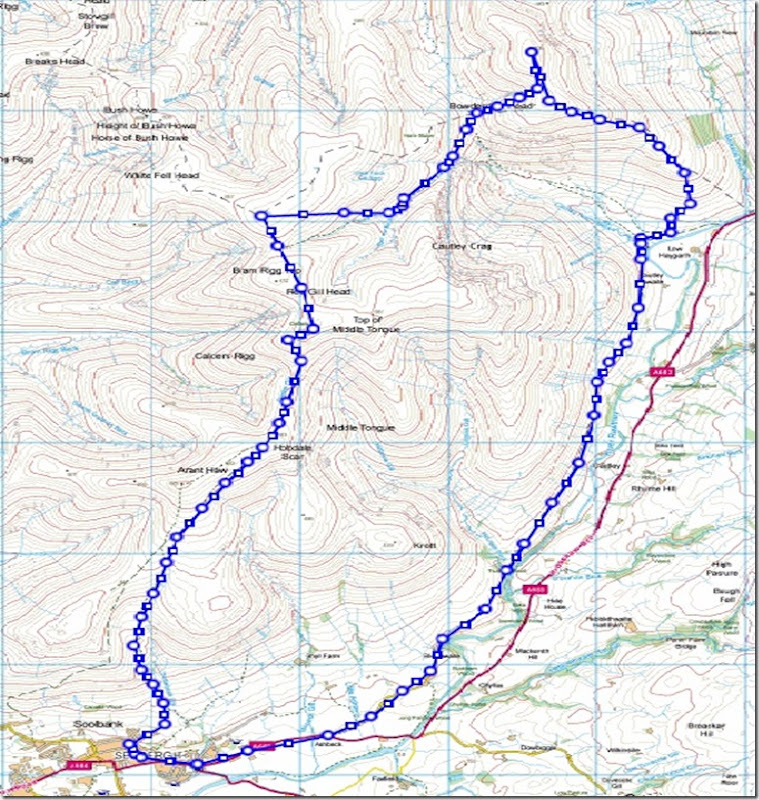 This is what my training misses, the contours. Might need to add a few of those 🤔