Each January, for the last three or four years I've lead a Durham County Council Guided walk from Cowshill in Upper Weardale to the County Boundary with Northumberland, then across some lovely moors with fabby-whiz views of Weardale and alongside the RiverWear back to the start. My motivation for doing this was an occasion, about six years ago when me and Bruno walked the same route in hard winter conditions when the snow was deep and solid, the walking easy, and the sky was blue and, I hoped that at some point, a bunch of Durham CC guided walks punters might experience the same conditions. It's always been cold and often snowy, but never quite the same, as yet.


I titled the walk "A Shivery Walk to the Border". A bit naff, I suppose, but the walk title has stuck and a few die-hards brave the Neville's Cross traffic lights and the long drive up to Cowshill every year.

Me and Lucky did the reccy for this last Monday. Lucky was wearing his new toasty dog-jacket, and just as well too, since the weather that day was on the turn from the soaking warm-but-outrageously-wet November and December to a something a bit more snowy and wintery.  Monday's precipitation was still mainly wet, but there was an edge to the cold and occasionally, sometimes, there was stinging bits of snow in the rain. There was snow on the moors too, and I took Lucky to the 2009 foot summit of the moor so he could bag the Nutall. He wasn't specially impressed, though. I could tell.

﻿ In fact, I used the group shelter for me and LTD for lunch in the folds at Race Head.


On the Wednesday, fourteen people and Bailey the doglet turned up and the day was a notch colder with less snow but blue skies and a nithering wind. Shivery, in fact.

Wednesday's views of the snow-clad Teesdale/Weardale ridge in particular were stunning and, apart from a few incidents involving deep boggy bits, the walk went well, I think.

It seems that the winter may now have arrived. There was snow on the roof of one of the main drumtowers at Knipetowers this morning and the chains of the drawbridge scattered ice particles all over the postman.
And its perishing cold outside.

The walk is 8 miles and there's a map below. Some people with GPS devices thought it was 8.5 miles. I though it was 8.6 if you go to the summit.

And there's some nice samples of fluorspar along the Race Head track - particularly under the roots of a fallen tree in the little wood at the end of the track. I've got a huge lump. And I'm not really bragging.... 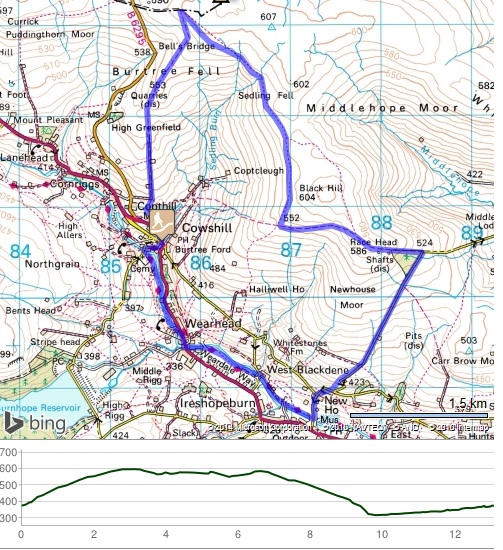 Oh yes, winter's here. For the moment anyway. My eyes were stinging looking at your photos. As long as the rain holds off..!