Walking Across Morecambe Bay with Bay Search and Rescue 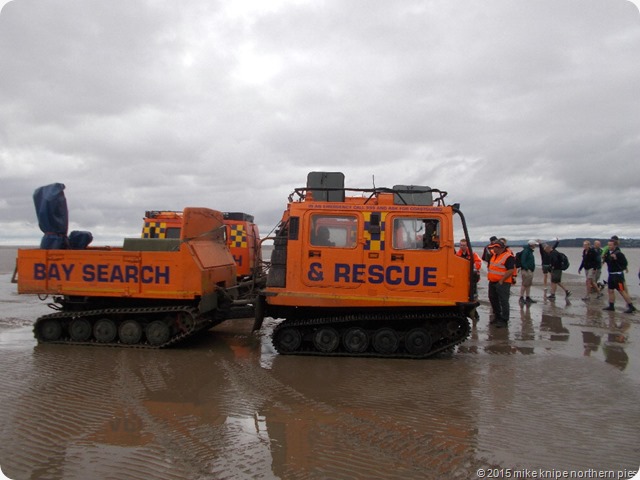 I seem to remember that walking across Morecambe Bay appeared on one of my “Things To Do” list way way back in the early 1970’s. But I seem to have forgotten to do anything about it. Then, recently, a leaflet fell out of a magazine I read (was it Lakeland Walker…?) and I decide to take the opportunity. So I registered, booked a bus from Kents Bank back to the start and that was that.

Bay Search And Rescue had it as a fundraiser and Cedric Robinson, the Queen’s Guide lead the walk from Arnside. 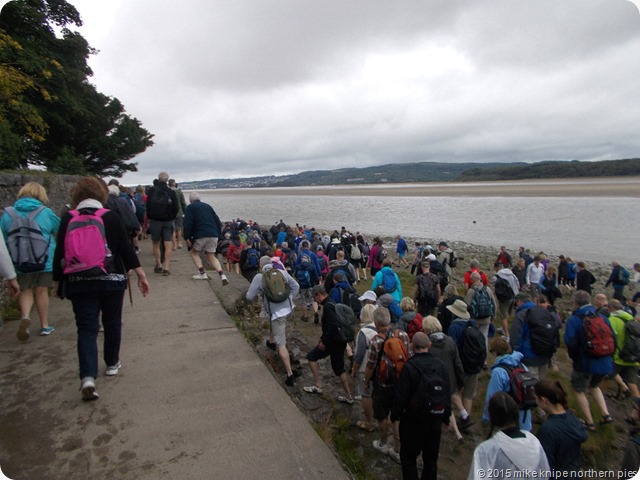 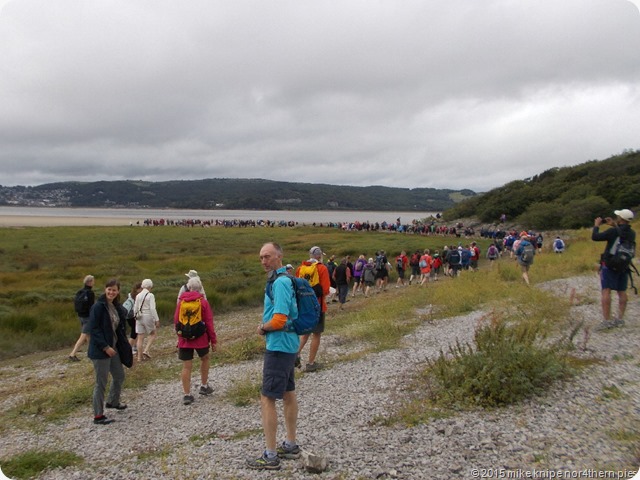 Remarkably, 780 people plus quite a bunch of doggies turned up too. Maybe if I did it again, I’d  appreciate the sheer vastness of the scale of Morecambe Bay more keenly by going in a smaller group. Its not a walk I’d try to do myself, by the way, and I would only recommend other people to do it solo if they appear on my Pieman’s Brake Pipe list. Others should be more careful. 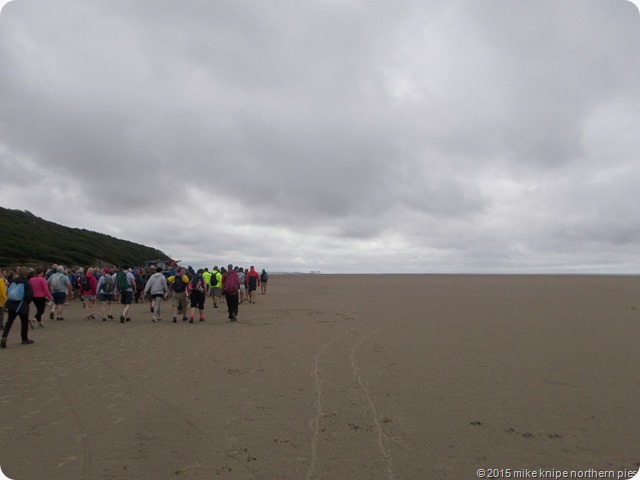 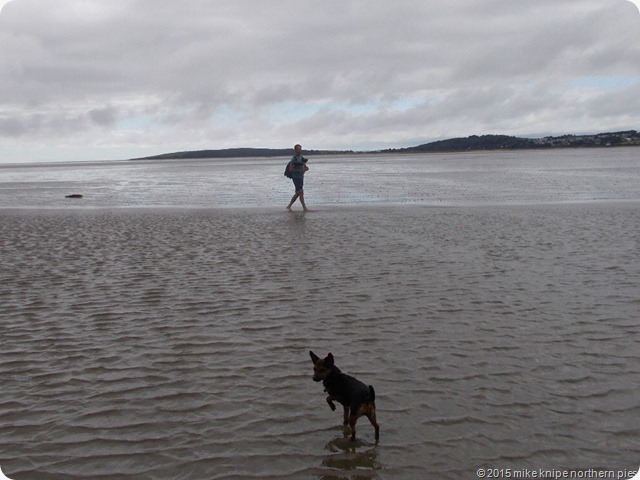 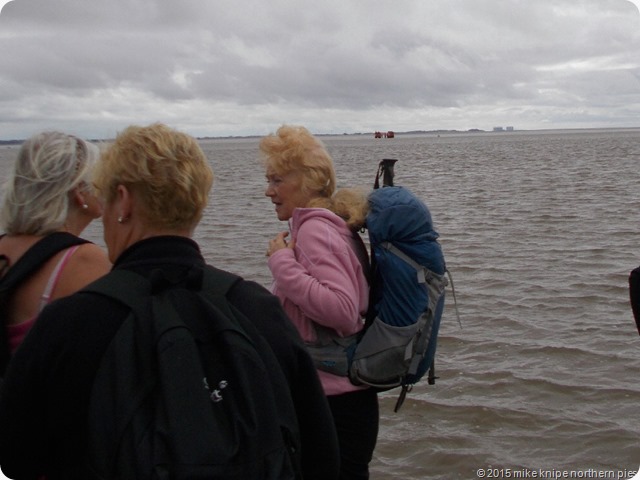 Morecambe Bay is truly huge. No, I mean Big, in a Really Big kind of way. The way from Arnside to Kents Bank appears, on the map, to be a simple toddle of a couple of miles. But that’s not how we get there. Cedric initially took us a long way South – towards the little boxes on the far horizon that are Heysham nuclear power station. Then ,as we handrailed the coast, somewhere a bit West of Silverdale, we crossed the main River Kent channel. At first sight this appears to be a just a wide lead of water. It turns out to be knee-deep and with a substantial current which would make falling over a specially unpleasant experience, I suspect. Happily, the water was quite warm. 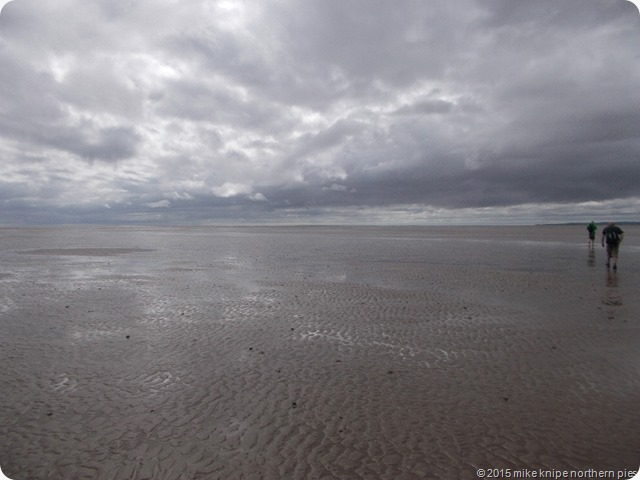 The we finally turned West, or, maybe a bit North-West and headed for Humphrey Head before turning a bit more North where the grass starts (very strong sulphery smell here – best not fall into any of the mud…) and a bit of coastal walking ended the walk at Kents Bank train station where my bus awaited. 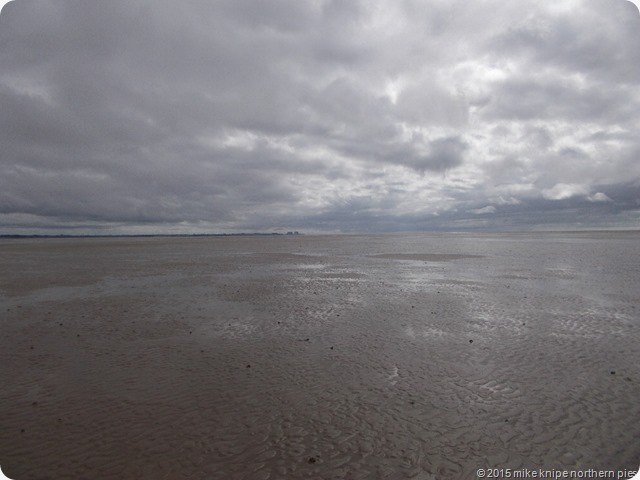 Lucky wasn’t on this walk although he’d have enjoyed it all except for the River Kent channel, where I’d have had to carry him. This is because they didn’t let dogs on the bus. I could have caught the train, though. I’d appreciate it if nobody ever mentions this fact to the dog 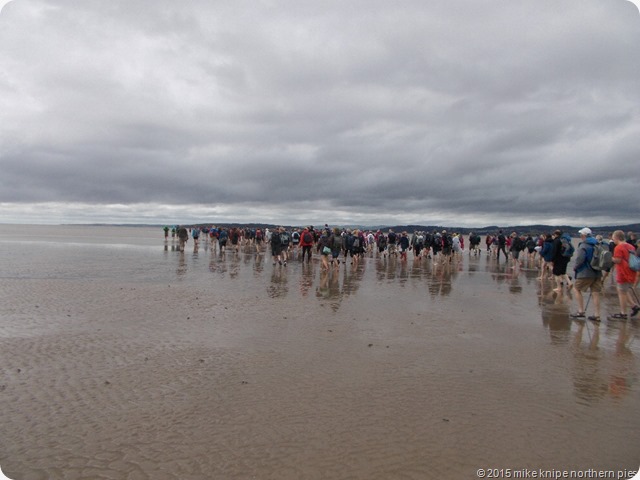 Anyway, it seems that with such a good turnout that Bay Search and Rescue will have made a few well-earned spondoolies from this jape. Its a good do. I’d recommend it. They supported the walk by shadowing it with a tractor fitted, apparently, with a sofa on in the back, plus two half-tracked go-anywhere vehicles. And Cedric had placed tree branches and a couple of rags-on-sticks to mark significant waypoints. 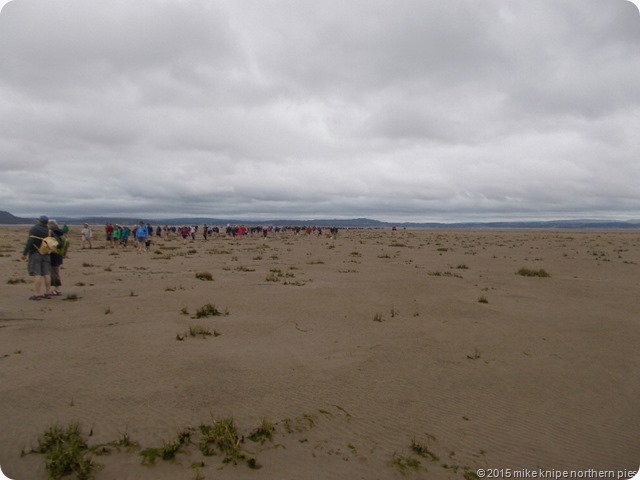 Afterwards I bagged a little hill just outside Storth – one Haverbrack Bank – a steep little thing  some 367 feet high and boasting a fine view of the Kent estuary. Unfortunately, I’d left my camera in the car (dhuhh)

The Morecambe Bay walk was about 7 miles with just a little ascent on the coast – easy walking on hard, rippled sand – done barefoot and 2 miles for Haverbrack Bank.

Bay Search and Rescue’s website is here in case you’d like to know what they do and how they do it.

What an experience! And what a lot of people....!