There May be (Slutchy) Trouble Ahead…. 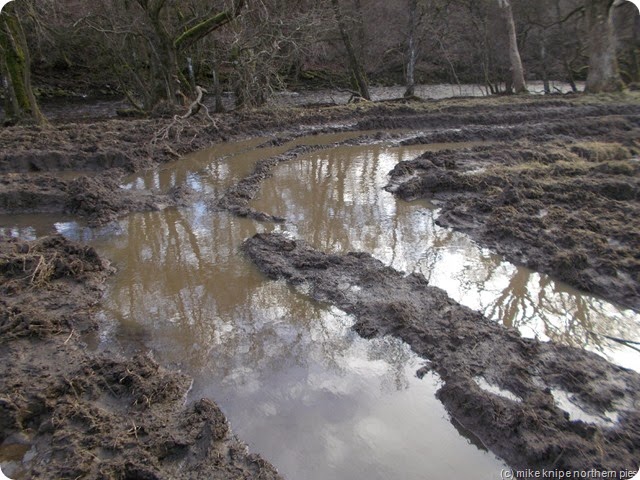 On Wednesday, blizzards permitting, I’ll be leading the Wednesday Walkers, or as many as turn up, on a little trundle around Crow Coal Hill.

Me and Lucky did  a reccy of the route a day or two ago and found slutch. Lots of slutch. Slutch is a Lancashire word for the particular mix of water, soil , and, in this case, cow poo, which makes the particular sound which sounds like “Slutch” when you pull your foot out of it. (Note carefully that I used the word “foot” here since the continued attachment of footwear to the foot after immersion in slutch is not necessarily guaranteed where slutch is concerned. Indeed, the foot may well be sripped to the skin, although the slutch itself could have certain beneficial properties providing you don’t drink any of it.) It may also refer to the sound made when you put your foot in it, too. 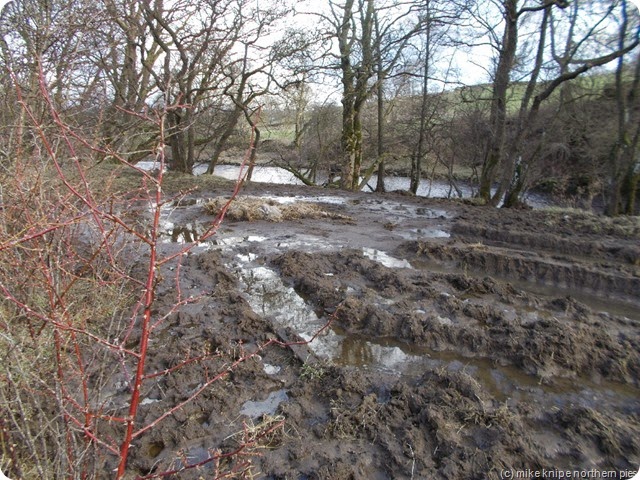 This slutch was deep slutch too. Too deep for the diminutive Lucky.

Its on the Weardale Way between Eastgate and Stanhope – a normally benign and quite pretty ramble when the river’s not in flood, in which case it gets a bit desperate. The cows who are contributing to the amount of slutch are still present, but the farmer, who’s tractor has deepened the slutch into a brown moat, probably full of all kinds of horrors, including the bloated cadavers of missing members of the Crook and Weardale Ramblers and their bobble hats, cheese butties and walking poles was absent.

We won’t be going this way incidentally, since me and he dog had to trespass onto the nearby railway to bypass the slutch and the cows. This wasn’t too bad because the railway hasn’t seen a train for years and years and years…..

Here’s a nicer bit of the Crow Coal Hill route, though…. 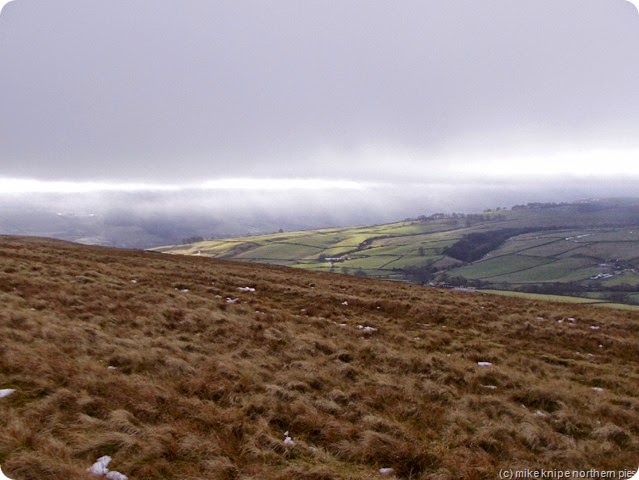 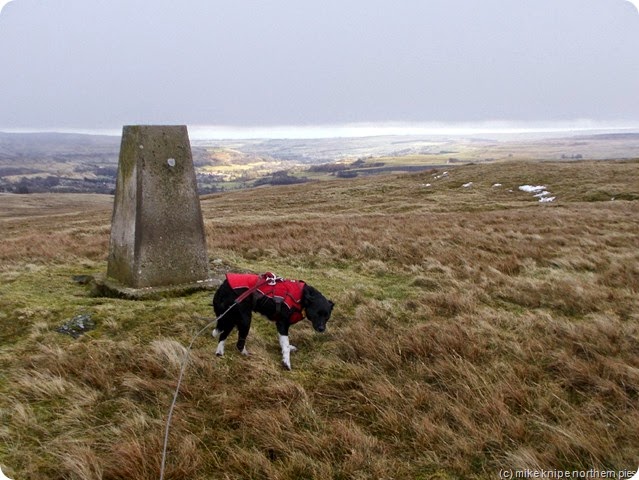 Slutch – I want you to practise saying this at every appropriate opportunity – just to enhance your vocabulary. You may apply it to sloppy mud, the horrid contents of a nappy or to badly made gravy. Use your imagination.

Slutch, that’s onomatopoeia, that is.   We know a song about that.

I once left my running shoe in slutch when it came off during a cross country race. I was more interested in winning (which I did) so finished the race with one shoe on. My mother was not pleased as the shoe was lost forever and we were not well off!

I like the sound of "slutch", and will try to use this in future. I have another word for these conditions but it is not as nice, so "slutch" it is from now on.

Fabulous word. Love these northern words. Not that I can think of any others just now. Age related...

VC - That's proper slutch, that is.. It'll probably appear on a future timeteam at some point...
Andrew I wonder if its possible to be gruntled by slutch...?

I see that Lucky still has white paws!

I have a walk planned for Wednesday, I am leading a ten miler. I hope we don't find any slutch, they will not be happy.

In YOrkshire we call it Sludge lol

Can't believe you are having to define a perfectly ordinary word like slutch. Please and thank you ever so much then I'll throw it in the etc

Ah, you should fettle your routes to miss out the slutchy bits.
JJ

We have muck and sludge, but I think slutch is an excellent word for the combination. I hate it when it gets hold of a boot and only agrees to release the foot that used to be in the boot. That very wobbly feeling of balancing and holding up one bootless foot and trying not to tip right over bodily whilst grabbing for the vanishing boot...acrobatics! I'm not as young as I used to be.

Now I really thought you were going to do a video of you singing the song then....

Jen - lucky tiptoes around anything cold, wet or muddy!
LLona - I reported the slutch to the DCC rights of way team and they said its always like that in winter and they're trying to think of a solution. Hopefully you wont have too much of the stuff on your walk!
Sue - I'm actually from the Lancashire part of Yorkshire so I speak both languages....
John .. slutch? naughty boy.
John J - It's fettled by a little tarmaccy bypass. It's going fer t' snow anyroad...
Quinn - Yes - your talking about the Lancashire Moors Fling - a traditional mud dance during which your shoes disappear and you end up with a mud angel. Often seen outside remote moorland pubs.
Dawn - I suspect that's a bit of Yorkshire...
Chrissie - I suppose I could do a musical rendition. Or I could be bribed to keep quiet...