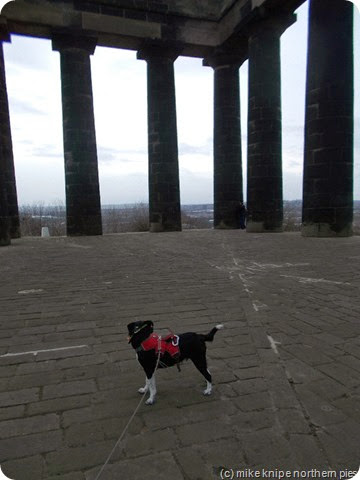 Penshaw Monument appears on many, many blogs. Many, many blogs. I read some of them. And it dawned on me that whilst I’ve lived in North-East England since Christmas 1985, I’d never been to Penshaw. And then, a clincher – it’s a TuMP. It has a little green triangle on www.hill-bagging.co.uk and I just had to turn it into a little red triangle. I had nothing better to do. The dog was busy eating a roll of sellotape and also needed better things to do. AA route-finder said it was only 19 miles from the outer moat at Pietowers. It had , more or less, stopped sleeting and the wind had died down to  force 6 to s7, occasionally gale 8 so we went.

Just to say, that Penshaw Monument sits on top of Penshaw Hill, which is very close to Penshaw (the “pen” part of the name may well be significant here) It was built in 1844, which is just after teatime, and is a landmark which is iconic to the North-east of England. So, if you live here, you should go, really…. 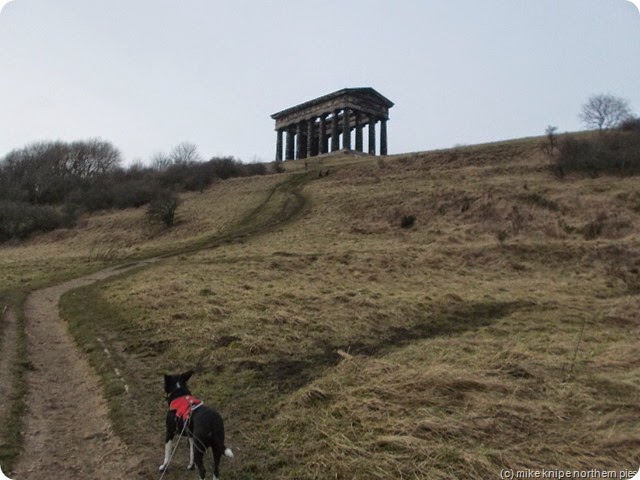 Its a stiff little climb from the parking area to the top – but mercifully short. Also lucky was the cow with a suckling calf (is this the right time of year for breastfeeding a cow up Penshaw Hill?) – which watched us go by but made no move at any kind of cow-with-calf dog-type frenzy. 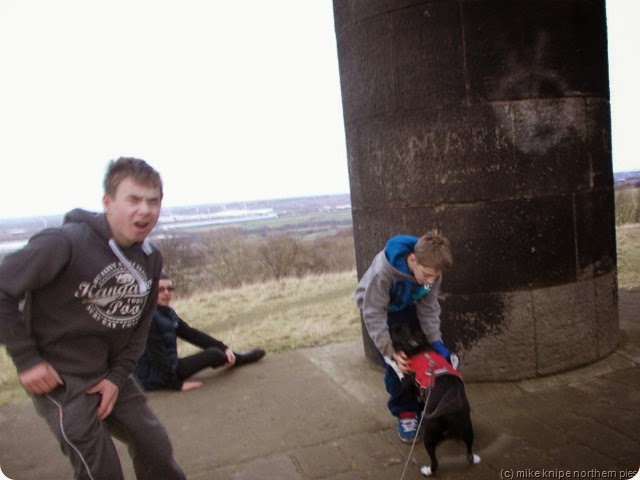 On the top, and now inside the temple thingy, Lucky soon made best pals with some local yoofs who were out for a jolly. Lucky has a pretty rosy view of humanity in general, which is, er….  lucky. 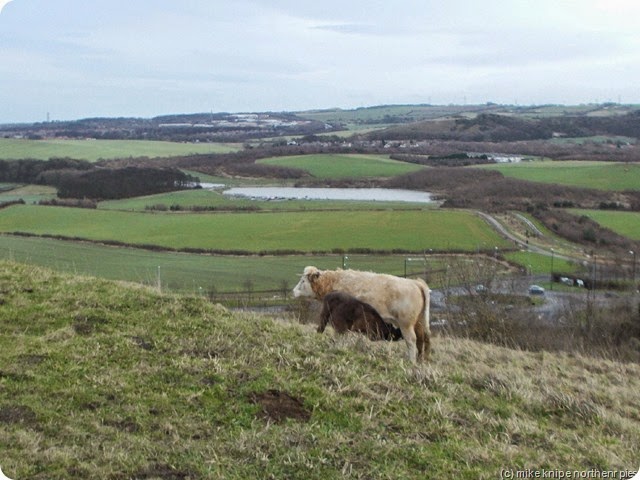 After looking at the view which substantially consists of the Nissan factory and some light rain, we explored the complicated network of paths and tracks in the National Trust woodlands around the hill. Happily, we didn’t come across any huge worms (local legend has a large worm or woarm wrapping itself around the hill, only unwrapping itself to have a lunch on one of the local Penshaw villagers – a bit of a bugger as he was due on shift at the car factory that very evening.)

Anyway, Penshaw Hill and monument is a cracking viewpoint, having a 52 metre drop and whilst it’s well populated (i.e. busy), it’s well worth an hour or two’s exploration.

Speaking of making a meal of things – we did two and a half miles. Gorra tick, though.

I always wondered what that structure was.
JJ

Ah, and I thought it was some sort of annex of Pie Towers!! !!

Think that lad on the left might have trouble with a worm?

JJ - Now you know - and there's a tea room at the bottom too.
Dawn - It certainly looks a bit like the folly in the North park at Pietowers, except that one is actually finished and papered inside with anaglypta.
Andrew - He said he was trying to get his phone out. The other lad is obviously having his groin inspected - one of Lucky's many hobbies.

I was born and raised in Penshaw literally 2 minutes from the hill. Locals pronounce it Pensher posh people say "shaw". Ive so many happy memories of playing in and around the monument as a girl, but haven't been able to go back for years due to ill health. Your view of the monument has made my day I thought Id never get that view again. As for the Lambton worm wrapping itself around it, we were always told that was actually Worm Hill at Fatfield not Penshaw hill. Thanks Mike for the trip back to my childhood

I really feel as though I should know that place, but I don't...

Thanks Ann - I'm happy to spark off some nice memories. I didn't know about Worm Hill - sounds logical, though [goes off to look up Worm Hill) Pensher seems a little bit posh nowadays?? Or should I say PenSHAW...?
Chrissie - I expect you'll have been up there - it's a famous iconic spot!!