Things To Do On A Hot Day #1 The Plodge 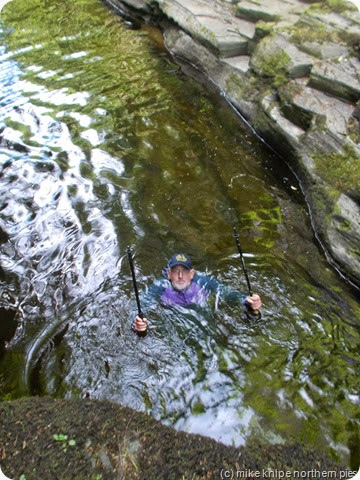 Brian demonstrates the proper use of walking poles. These are special deep water poles – don’t try this with any old sticks.

About once a year – on the North Pennines Hot Day – usually about this time of year, in fact,  me and Brian like to wander over to Ash Gill Bridge to descend through the  cool pools of the very lovely Ash Gill and the greenly dark and hidden parts of the South Tyne gorge leading to Garrigill village.
This is an expedition of approximately 2.3 kilometres with hardly any ascent at all. 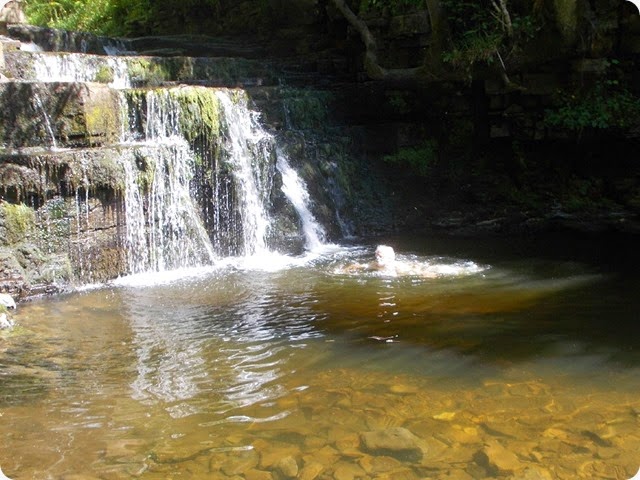 Pool #1 Demonstrating the “Lets Pretend Its Not Cold But Nevertheless Make It To Land As Fast As Possible” stroke. AKA The “Talking Whilst Breathing In Sharply” paddle.
A car left in Garrigill provides the opportunity to get changed out of wet clothes without embarrassing many local residents and also avoids a walk back to Ash Gill Bridge in wet trollies. 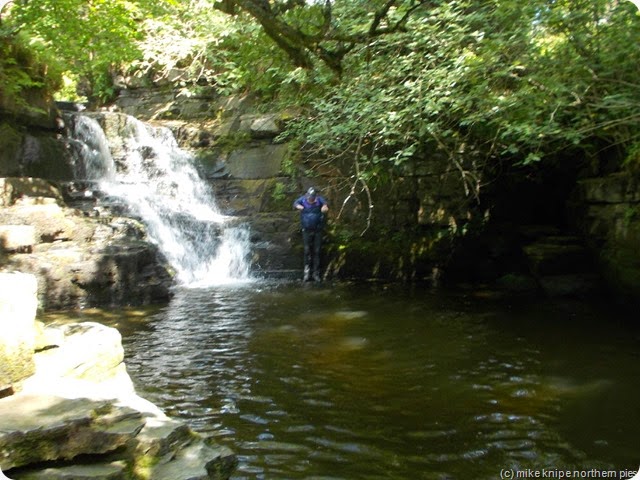 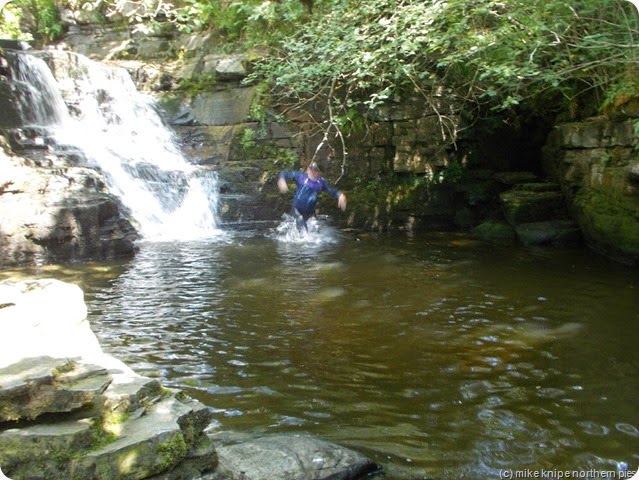 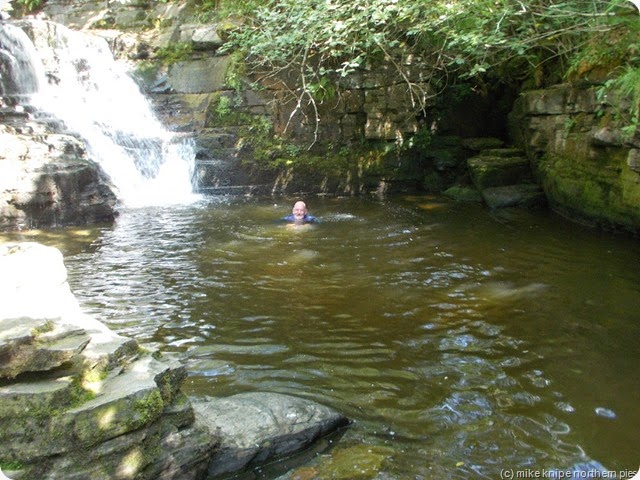 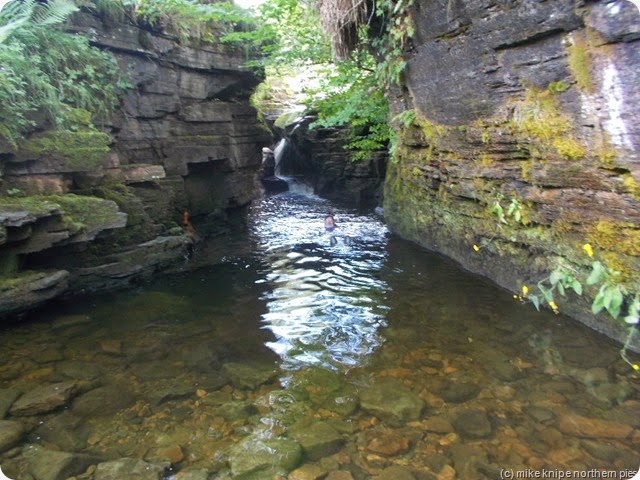 And so , on the occasion of Brian’s 72.93r birthday and the 51st anniversary of the Knipe family holiday in Morecambe in a  small caravan called “Noyna” we parked the knipemobile at Garrigill and the Brianmobile at Ash Bridge and descended the steep and slippery path to Pool #1.
Due to being nibbled by hungry horseflies on the 2013 expedition, we decided to wear clothes for this trip although I did remove my t-shirt for Pool #1, but put it on again straight away thinking that it might either be warmer or it might briefly hold a bit of air in it and , therefore, delay my demise by drowning for a few precious seconds – maybe half a minute. Anyway, Pool #1 is an easy introduction provided you don’t try to jump into it, cos its not very deep. 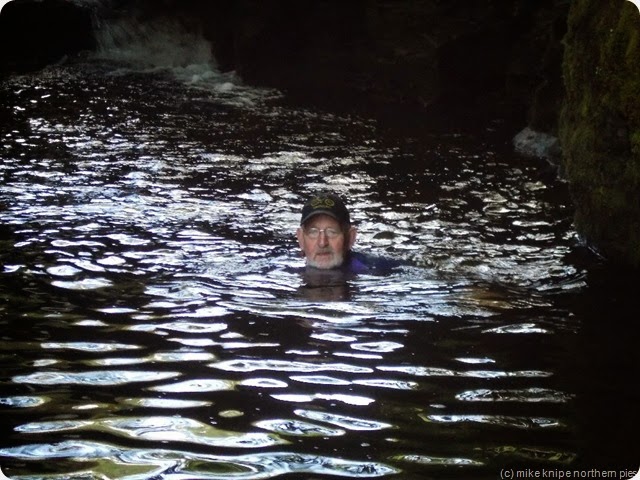 Brian keeps his hat on
Brian had his hat AND his walking poles to avoid any accusations of being under-equipped from any passing ramblers that might witness our splashings and sharp intakes of breath when plunging into some of the deeper pools.
Pool #2 was quite deep and required a bit of swimming and some climbing skills and Pool #3 was even deeper and the sides being slippery resulted in a bit of a slip and a deep , green and cold dunking for me during which I got my carefully crafted hair-do absolutely ruined. (What?)
Pool #4 was a pussy-cat and only needed a short swim.
This was all very beautiful and dappled green and sunny and smashing, apart from the attentions of the black-fly which, although non-biting are superbly annoying. And they follow you around…. 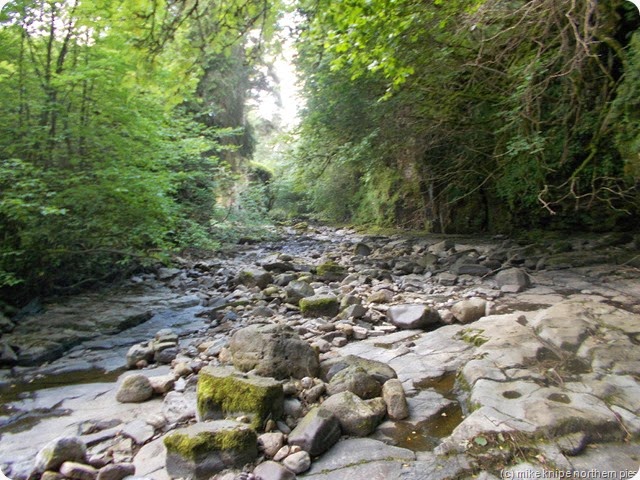 River South Tyne has no water
Then we entered the Tyne, which had no water in it at all until joined by Ash Gill. Here, it lies in a deep, square-cut and tree-lined gorge - a very beautiful and almost secret place – a real gem of the North Pennines , in fact, and hardly visited at all. The South Tyne was found to be full of fish – hundreds of the buggers which we took to be either brown trout or salmon. I noticed that they were actually following in Brian;s wake, presumably for larvae or whatever disturbed from the bottom by his boots.
Onwards downstream over difficult ground, generously littered with slippery boulders, passing under a footbridge and then a more substantial and ancient stone bridge. 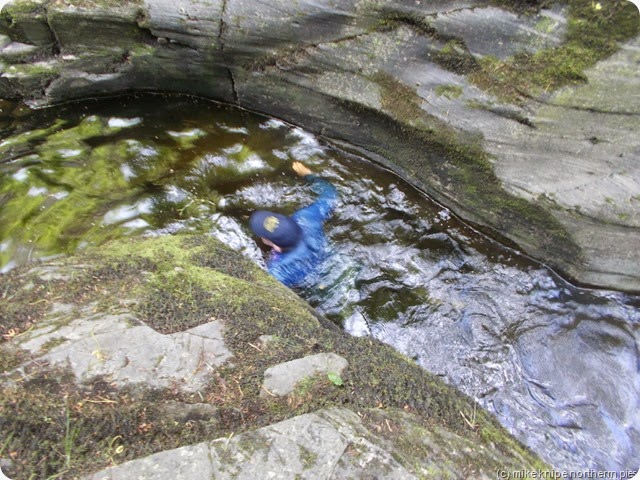 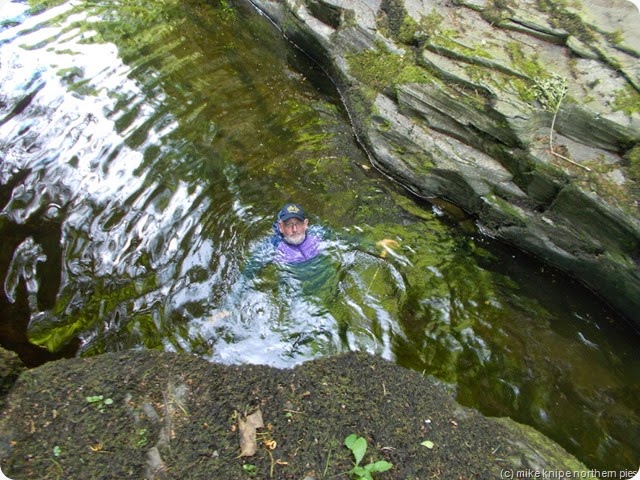 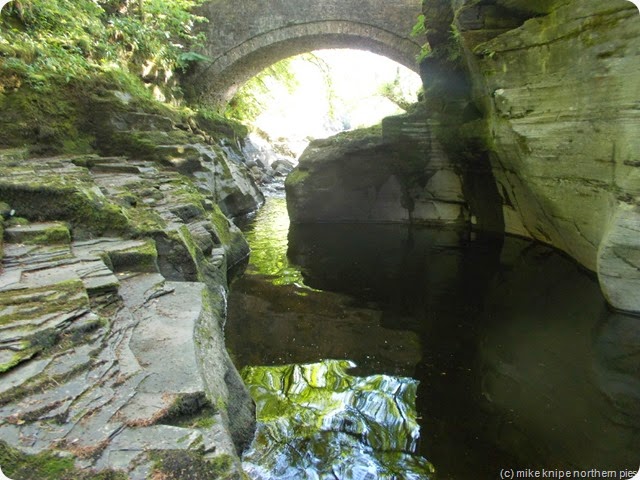 With a combined age of 134. it makes you wonder whether or not we should really be doing this kind of thing. Nice, though, innit?
Immediately following the stone bridge, the gorge narrows to a couple of feet and there is a long and very deep pool – the crux and also the highlight of the trip. The white box is for the camera, car keys and anything which mustn’t get wet. And it floats if you screw the lid on properly. 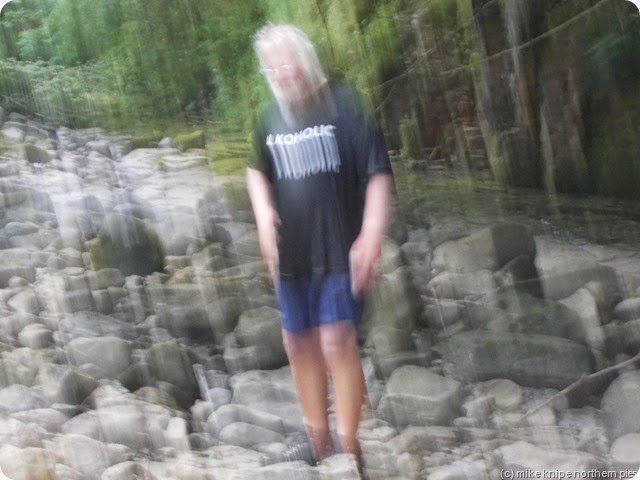 Take The Miners Arms Challenge
After this, there’s a couple more deep pools but its mainly awkward walking/paddling on slippery cobbles. More water is added to the river at Cross Gill then it’s all over and only the challenge of the Miners Arms at Nenthead remains.
When its hot – have a plodge.

Click on the fuzzy alkoholic pic to donate to Mind
Posted by Mike Knipe at 22:27

Brilliant Mike, utterly fantastic, what glorious fun and with some amazing photos too. By the by, music and speech in the background is a little odd?

You have to be in for a while to overcome the cold. You are never warm mind, just numb. I hear if you swim there you get out a poet or mad, or was that somewhere else maybe.

Aargh, Dawn, what music and speech??
And then, Alan, after a bit longer, the shivering starts. When it stops again, you're in trouble.... But the sun was very hot, so..

advert for a holiday and then some strange music (ethereal???)