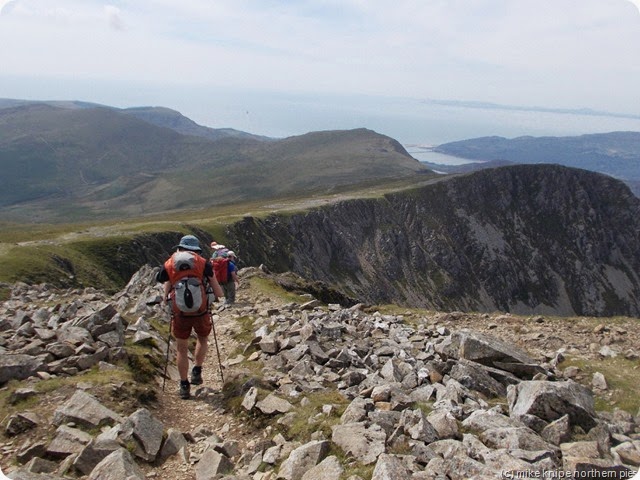 Its a well-known fact that DofE expeditions aren’t allowed to speak to anybody whilst they’re out on expedition – at least all my attempts to engage a column of sulky DofE participants have been met with blanks – apart from the nice lass at the end of the column heading over the Shell Island causeway who, despite her obvious suffering, managed to smile weakly and gasp a hello. . They also have to carry far too much to..er…carry. Duke of Earl Expeditions break both of these rules and so, after a brief kit-check, involving scouring the campsite grass for loose change, we set off in a lump up the steep lane leading to the other end of Cadair Idris, notably a top called Craig Gau.(Which the group – except me - of course, failed to bag) 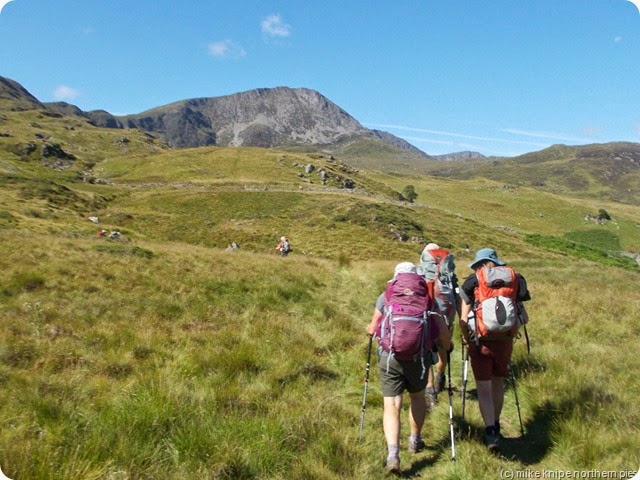 It was very hot and, as the group, pulled away from the heaving and sweating Pieman and disappeared around a bend, not looking back, or even aware that I wasn’t with them any more my DofE (Silver) expedition almost came to an early end and a plan was forming to return to Nantcol at Llanbedr and spend the time on the beach with some 4% proof tinnies – probably about six of them, I would have thought..

As I came up another steep bit, dripping salty water all over the road, the group had actually stopped, but as I arrived, the cardiac bits almost on the point of collapse, the buggers set off again. 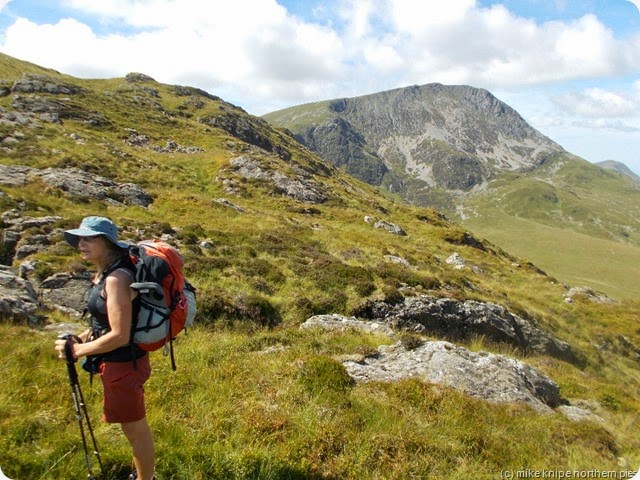 I did eventually manage to open up the  auxiliary cardiac blood vessels I’d created before they put the stent in and start to be more comfortable with the contours, but others were slowing and it seemed a good idea that the codgers amongst us should, perhaps, stick together, for moral support and to control any desire to try to keep up 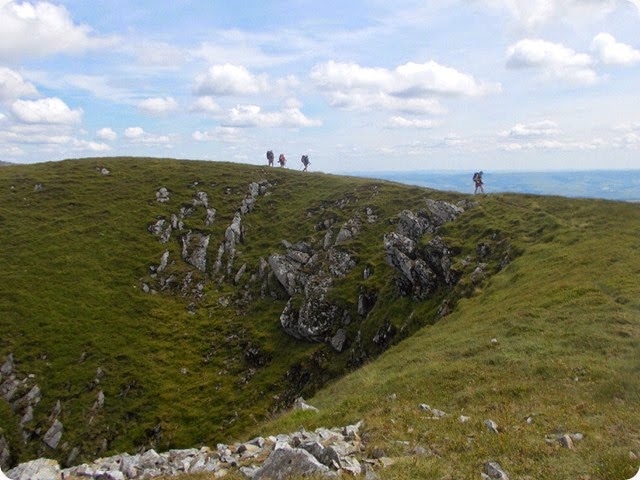 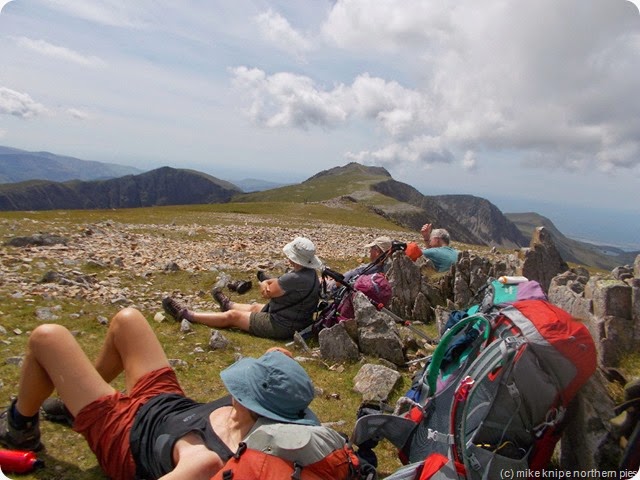 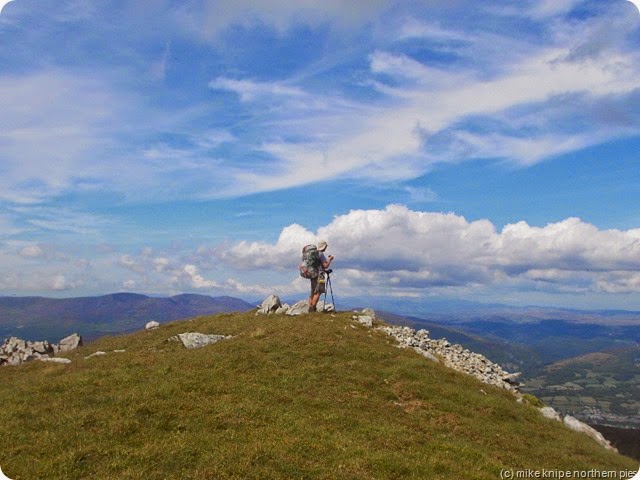 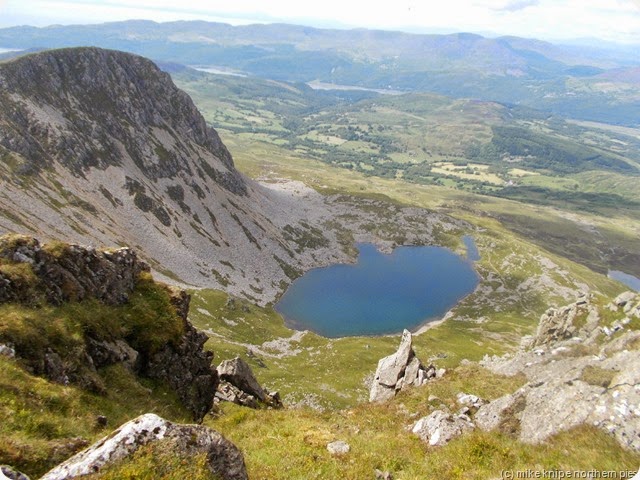 There was a bit of a stop Mynydd Moel and another on the summit of Cadair Idris and I was more than pleased to note, on our descent , that many of the walkers coming up the hill towards us were much younger and much much more knackered than we were. 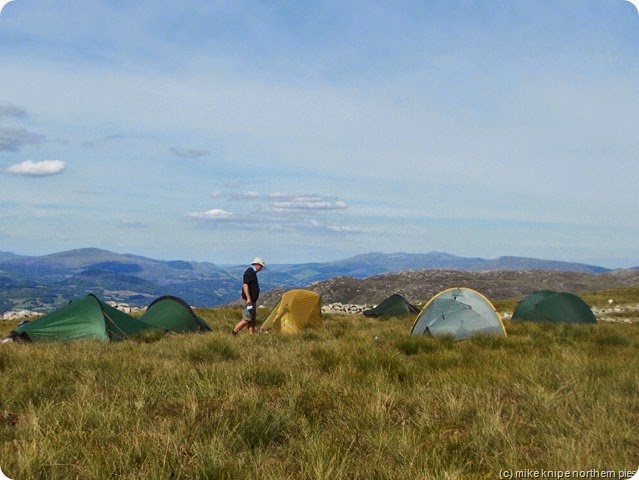 Our leaders had already consulted each other about routes and camping spots, and dashed off once again towards some spoil heaps away in the distance. More struggling went on at the back – and, luckily some sense seemed to have somehow prevailed on those at the front and a new campsite at the head of the Pony track was chosen. This was a cracking situation and an evening of fine views and hot sun was enjoyed whilst our leaders consulted each other once again about which route we were going to take the next day.

In the meantime, I took the opportunity to watch my stove fall over and set fire to the grass inside the akto porch (too windy to cook outside) Thus I lost half a litre of nice water and in the resulting short  panic , I leant too heavily on my sleeping mat and burst some compartments. Slowly, overnight, it turned into an accurate scale model of Ayres Rock. It’s now busy turning into a huge brown football, so I could probably do with a new one. 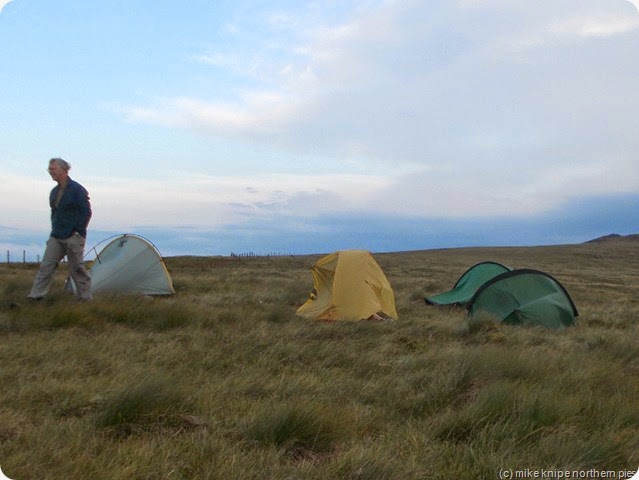 In the late evening it got windy. By the early hours it was blowing a hoolie and tents were flattening, lurching around and occasionally bashing their occupants around the head. Dawn’s tent popped a peg and had to be temporarily demolished and weighed down with stones. Dawn became a refugee for a couple of hours in my tent but as soon as it came light, she put her tent back up again. 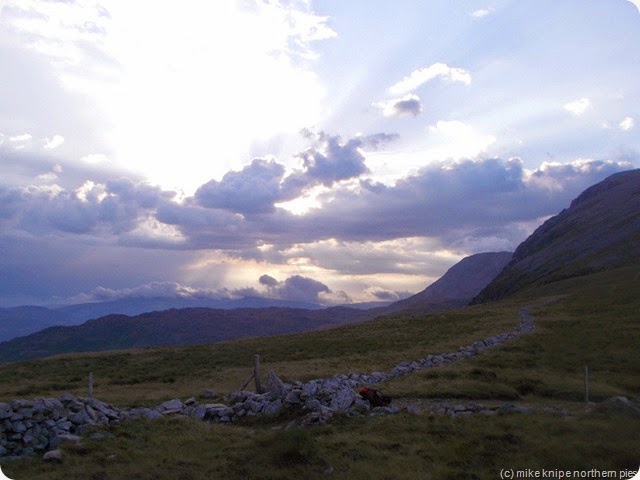 At six-ish, conditions weren’t getting any better and JJ announced that a weather forecast had predicted violent thunderstorms, so we buggerred off, smartish, having breakfast in a sheepfold/ladies toilet at the foot of the pony path. 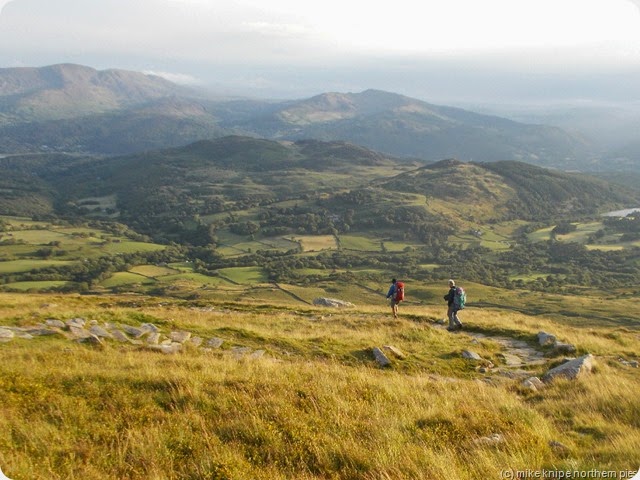 Meanwhile, our leaders (note that these were actually guests by the way – the cheeky buggers) were once again consulting each other about our route back to their campsite and it was at this point  that I decided that escape was the better part of having a row and I grumpily peeled off the back of the group and headed for Llyn Gwernan, a beautiful tarn nestling beneath the bracken and rocks of Craig y Castell – my Marilyn and cheerer-upper of the day. Craig y Castell is a rough little bugger with a couple of rocky tors on top, one of which I thought was the summit and, after a twenty-foot scramble/climb in which some teetering was done, I discovered wasn’t (the top). And it was even windier than before… 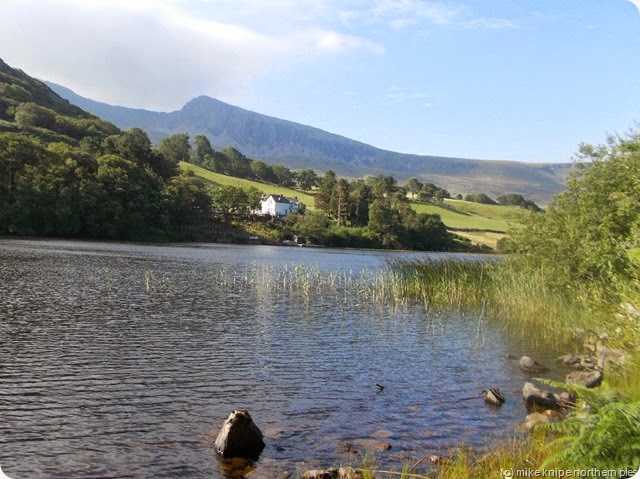 My route back to Barmouth basically followed the River Gwynant back to the Mawddach Trail and a retrace of the first day’s route.

The Gwynant is specially beautiful I have to say but the Mawddach was still a bit on the dull side (but with lovely views) and the water in the estuary was doing strange bubbly things on the incoming tide. There were also small herons fishing in the leads and I took these to be Egrets. (Look, I’m not Bill Oddie, innit?) Rien de rien (No, … no Egrets…. No, I will have no Egrets…) 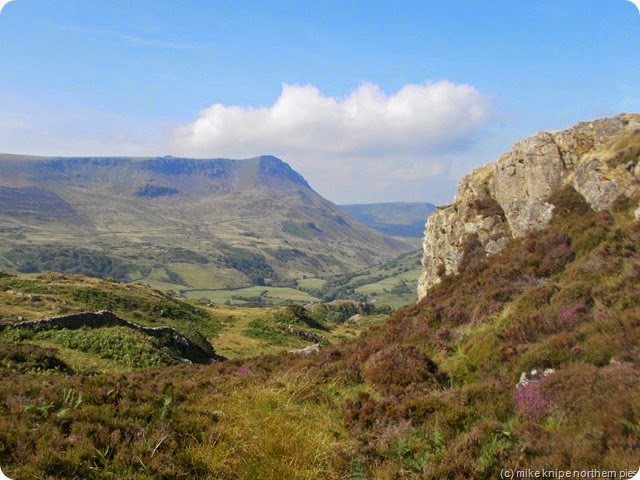 Dawn, Laura and JJ were on the Barmouth campsite when I arrived.

The next day, after breakfasting with Dawn and Laura I returned to the Nantcol waterfalls campsite for a night before returning home. This was made much easier by the fact that my car was exactly where I left it. I also had a nice chat with Pero, the farm’s young collie dog – a charming, friendly, squirming animal who understood doggy commands in both Welsh and English who, by his doggy charmingness put the final tin hat on my decision to get another pooch as soon as possible.

So, the trip didn’t work out very well in the end and fell short of the objective, due, once again to the weather, the perennial buggerer-upperer. But I’ll be back in a while to have another go, possibly in October. It’ll be a solo walk with a dog (hopefully), though.

Here’s maps of my route. Not the clever avoidance of several baggable tops on Cadair!

Total miles and ascent over the whole trip, including coastal walks 53 miles and 7600 feet 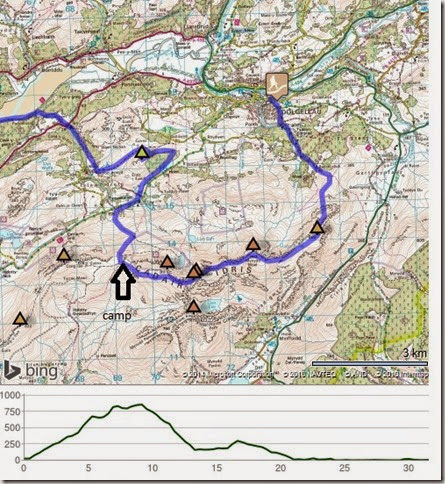 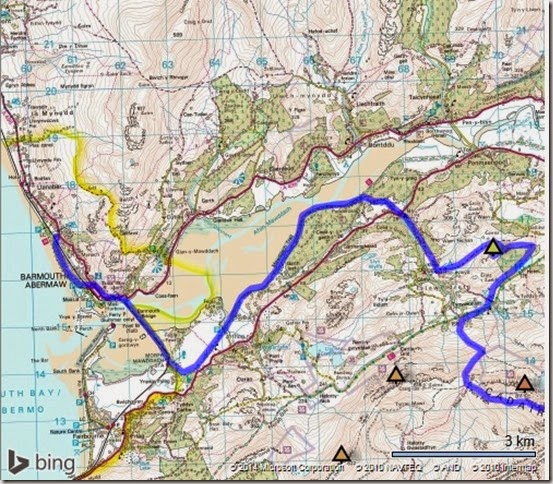 There's another doggy out there somewhere, just waiting for you Mike.

I've been many times to the lovely Cadair Idris area. I stayed in Abergwynant for about 3 months once, and walked nearly every day the Morfa Mawddach estuary trail, as it was an excellent way to get from where I stayed into Dolgellau, the only place with a Safeway for stuff I needed. And right at the foot of Idris is a wonderful valley that I often visited and stayed on weekends in the little campsite that was there at the time. I also approached from the other direction, via Kings (what a lousy name for a place in Wales); though it was a very steep climb up from Abergwynant. I’m so happy to see pictures from this area as it meant so much to me back in the day. Thanks for such a nice post.

There were a number of doggies in danger of being dognapped by Mr Pie on this trip. I was watching him y'see. He's a fussy bugger though, I didn't realise that his new hound will not only have to be able to navigate and drive, it will also have to be bi-lingual.
JJ

The uphillness was quite hard going at times Mike, especially in the heat.

Phew.
Exhausted, me. Have now caught up with your exploits.
A good trip. Wayward Distant Leaders can be a pain in the bottom.
It's always best to scare the bejeesus out of them by not showing up.
But of course, that only works if they care.
Nobody cares.
Ever.

Oh - and another thing.
You use Sitemeter tracking and I wondered if you were getting seemingly stray music suddenly bursting upon you when you looked at your site.
I've been experiencing this for the last few days and after a quick Google found it was in effect spam from Myspace via Sitemeter.
It's easily got rid of my deleting Sitemeter, but I'm loathe to do this as it's the one tracker I've used since almost the beginning of the blog. (Even though it appears these days that it only started tracking in the last few months, the figures that get sent to me are still from the start date)

Thanks Chrissie - I keep seing ndogss, but they're always somebody else's.
Louise - well you would, wouldn't you?
John - You noticed...dim cwn diolch
Dawn - I know... (phew) and there was quite a lot of it.
Alan - Tes - Phew and, you're right, nobody cares (sniff!0
I use sitemeter but don't get spam music (yet?). Its a bit slow though and my other sitemeter on blogger has 50% more views than sitemeter. But I stick with it for consistency. My thinking is that they're all probably wrong anyway, but at least the errors should be in proportion to each other and, therefore, providing a reasonable view of whether or not more or fewer people are reading the thing. Innit?

Reifyn - Its the co-op in Dolgellau! - in a shed next to the firestation! Abergwynant area is quite beautiful, though, I agree...

When I go on your pages Mike I get music playing which I was wondering if you had put it on or if it was spam?

No muzak when I look at the blog, Alan and I've not put it there, so it must be spam. Alan Sloman mentions music attached to the sitemeter... so... I wonder....

I enjoyed the trip. Puffing along in my old little hilly world, I was completely unaware of any baggable bits and hadn't even noticed that we'd had a change of leadership. I think I may have been a sheep in a previous life.
I like that photo of the windy campsite. I can now see why (from the inside) it felt like my tent was existing in only two dimensions.