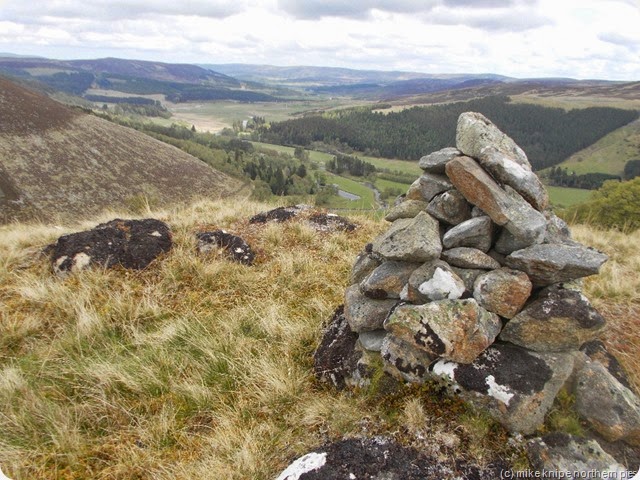 Anybody who has read the previous post will know that I spent the first part of my Highland hols in the very lovely Glen Mazeran. This was from Sunday 11 May to 14 May.

Most of the time was spent either snoozing or walking to and from my car which was parked about a mile away by a bridge. 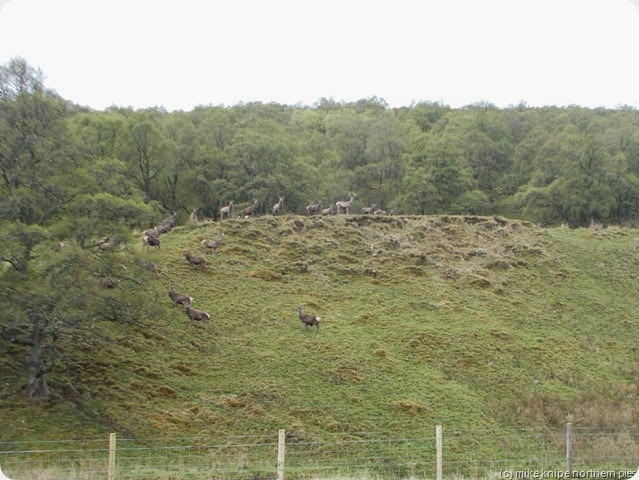 On day 1, during one of my snoozes,  the local ghillie visited and by a process of interrogation discovered that it was my car that was abandoned on the road, that I was to stay for two or three days, that I knew about digging poo holes, that some people on the TGO Challenge were about to disturb the peace of this otherwise very calm spot  and that I had a supply of bacon.

One afternoon, I did manage to bag the HuMP Cnoc Thulagain which rose stonily through pretty woods behind my tent and which, apart from the extensive views up and down both Strathdearn and Glen Mazeran, held no other excitements except, perhaps from the remains of ancient cairns along it’s top and the huge herd of red deer. Its an excellent observation post for both valleys and its not too much a stretch of the imagination to consider that in less secure times, that’s what it would have been used for. 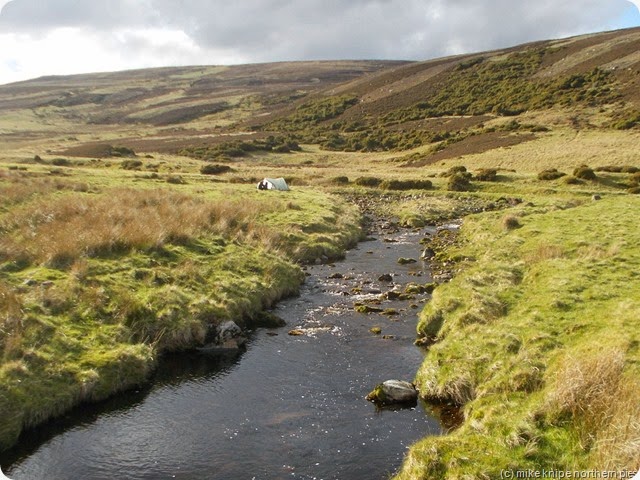 Mazeran is a very beautiful spot and is heavily keepered. The estate staff drove up and down at least half a dozen times every day and spent hours working at the very far end of the glen. In between the regular land-rover patrols, the place is a haven of peace for anybody who might be seeking an extended period of tranquility or a very long nap.

Mazeran also has huge herds of red deer, many of which hang around near the steadings at Laggan. Laggan also has kennels, one of which contains a husky in a very large hamster wheel. On my first passing, it was running like mad inside the wheel and on seeing me, got distracted and fell over, doing at least one full turn before falling out of the wheel. (arf!) 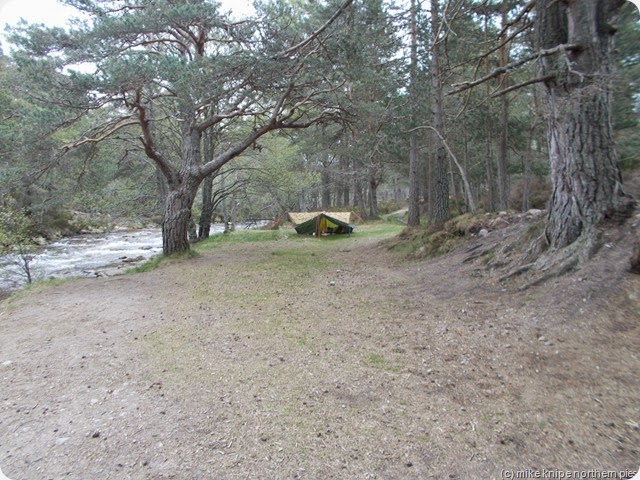 After some significant success for Cafe Akto at Mazeran where I met several long-established friends and , possibly, some new ones, I did the double carry out to the car and went off to Aviemore for fish and chips and shopping and did a single walk-in over the short distance from Whitewells to the Cairngorm Club Footbridge where a supply of chocolate cake, cream and coffee was provided. This is a very busy spot, but not, apparently for TGO challengers and only about half a dozen passed by. Some more turned up late but by the time they did, I was well into the beer at the Pine Martin bar at Glenmore. 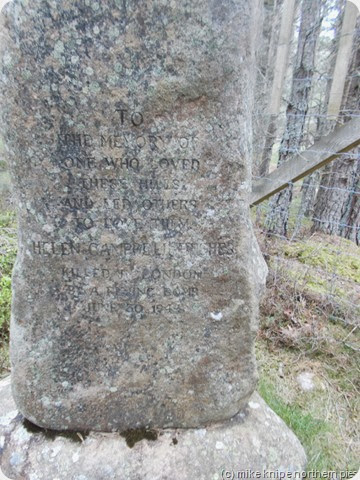 Most people who pass by the footbridge don’t seem to notice the memorial stone near the bridge. This has an inscription to a mountaineer, one Helen Campbell-Hughes who was killed by a flying bomb in London in 1945

The next day, after squirrel-watching over breakfast at the excellent cafe and meeting TGO-ers Humphrey, Laura and Louise,  I went round the back of the Cairngorms to Braemar and had a drive up to Inverey, Linn of Dee and Linn of Quoich. Many rather fragged-looking challengers were spotted along the road. 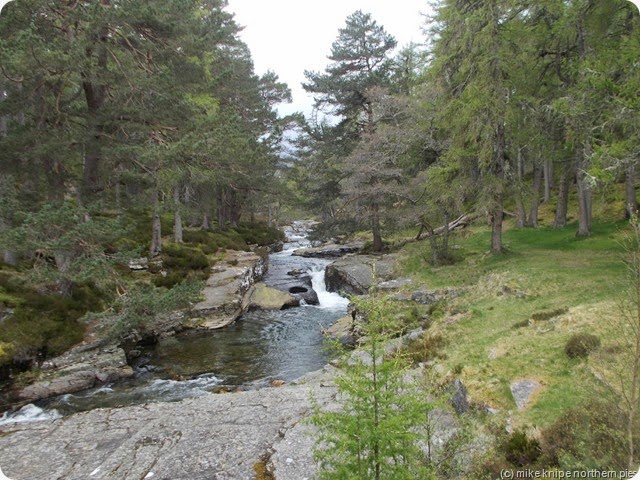 On the 17th, I parked up by Linn of Quoich and bagged the heathery Corbett Carn na Drochaide. I found this climb to be outrageously hard work and it was roughly at this point that I realised how important a TGO challenge (or similar!) is for my general walking-fitness, and that I’d been a bit lazy up  to now in 2014 – not helped, perhaps, by a weakening Superdawg. 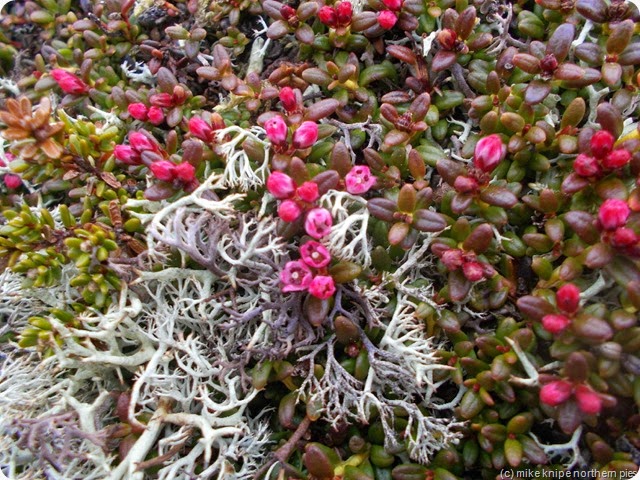 Carn na Drochaide is a heathery lump, to be honest, but has lots of bird-life, a fine selection of mountain flowers, and a cracking view of Ben Avon and Braemar city centre.

Even more TGO challengers, most of whom I knew were spotted on the drive back down the glen. Some were looking even more fragged that the ones I’d spotted the day before. 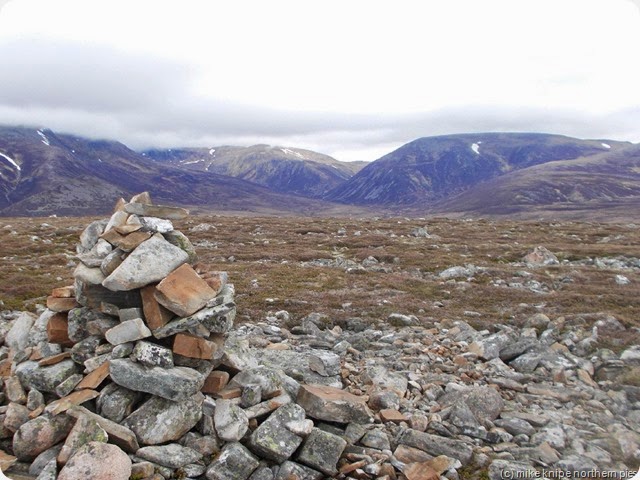 To be fair, most of my Braemar time was spent boozing, mainly in the Fife Arms, with TGO pals and so on…… although I got the impression that Braemar was a bit quieter than on previous TGO’s (although I don’t always go that way, so, maybe I’m talking dingo’s kidneys here.)

After two nights, I left for Glen Prosen, the main reason for my trip to the Highlands before I thought up the idea about doing Cafe Akto.

Doings in Glen Prosen will be detailed in part two. This will important info for prospective TGO challengers considering using Glen Prosen as a way to get to places such as Arbroath and Lunan Bay

I bet you can’t wait, innit?

Finally, a thanks to Andy Howell, for the generous lump of dosh. This has made up cafe Akto results to a nice, round sum of £200 and I apologise for the little poke I gave in the previous post. All that remains now is for somebody’s concience to be so badly rattled by this as to make up the numbers to a nice, round £300. 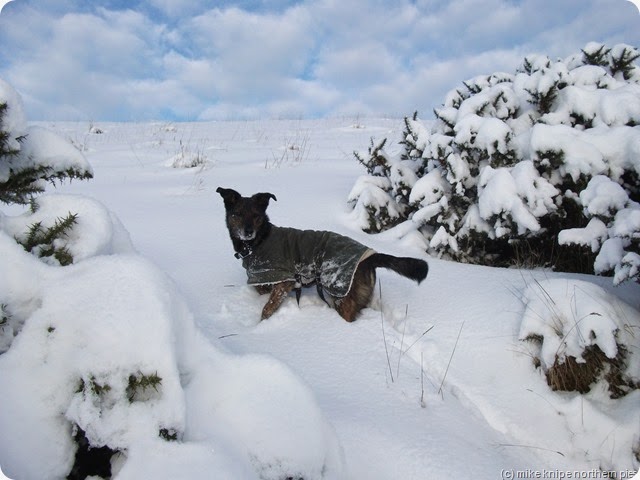 Turning to Superdawg – he’s turning out to be a right  tough little bugger and whilst at this very moment, he’s spending most of his time asleep and appears yet weaker, he did, temporarily, recover a bit to regain his appetite, play with a ball and bark at passing dogs. But now he’s hanging on again and is looking weak and old. His main strength seems to lie in his dangerously armed jaws which become tightly clamped shut when my body language tells him that it’s time for his tablets. He could easily break all the bones in my hand with those choppers, so its an operation not without personal risk. Its a good job that he remains in a good mood and the docile, sociable and friendly mutt that he’s always been.

Every time I see the name Mazeran, my mind insists on reading 'marzipan'. I was wondering if any food you brought with you, such as some cakes, had marzipan in them? If you ever return there, I recommend a marzipan-covered cake in addition to bacon for victuals.
Give old Bruno a pat on the head for me.

I hope I'll return to Glen Marzipan, Reifyn, tho, personally, I always take that and the icing off cakes.
I gave Bruno a pat!

Shame about the cake! Had two blisters instead.......