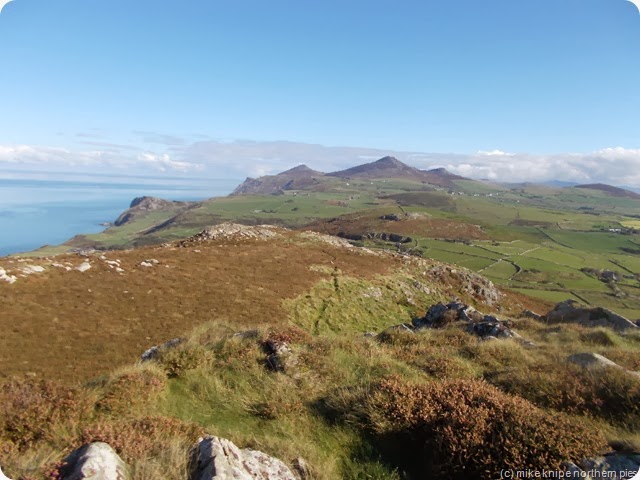 These last hills are widely separated by green and pleasant countryside which has sufficient wind turbines at the moment (just the one).

We parked in what was optimistically labelled as a picnic area on the OS map, but which, in fact, was a parking place big enough for three or four cars in what seemed to be a very old roadside quarry. It was a very nice quarry, though. 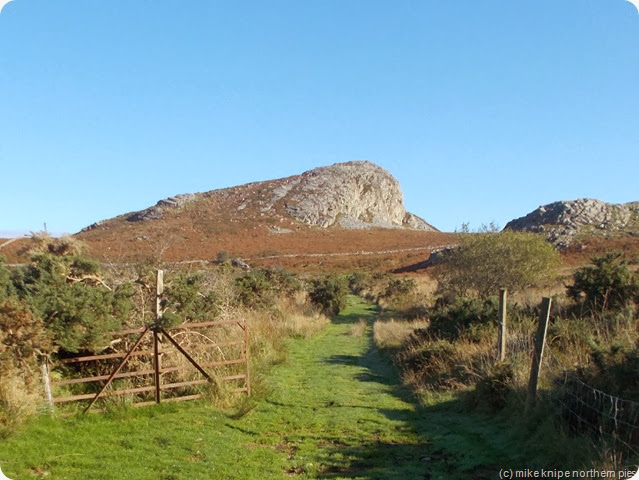 We marched off down the road towards Nefyn and turned off up a lane which was occupied by a chap on his mobile and his Jack Russell who seemed friendly enough on the surface. The lane took us towards a rocky knoll which was our target for this morning – one Gwylyr Gareglefain a HuMP of some 261 metres and sporting an easy scramble up it’s Southern slopes. A fine little top, in fact, and, as it was such a nice and warm day, we had a little sitabout for half an hour admiring the view and getting a little tan. 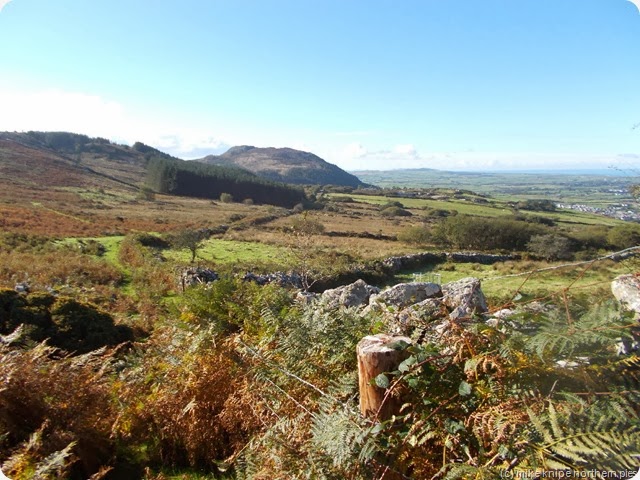 We returned whence we came. This time, the man with the mobile was strimming and was completely engrossed, which was just as well since the Jack Russell and Bruno got themselves into a bum-sniffing competition which ended suddenly when the JR attacked Bruno’s backside quite noisily and grabbed a huge lumpaof flesh and hung on. The skirmish ended suddenly when the little JR seemed to take flight with a little surprised yelp. He flew about two feet in the air and went forward some five or six feet. I’m not sure exactly what happened to him as I was looking the other way [koff…]. No, honestly. Luckily Jones The Grass (Strimmer) didn’t notice and merely remarked in English on what a nice day it was. The JR didn’t seem too upset and trotted along with us happily, but just out of reach of my right boot. As they used to say in the News of the World, I gave my excuses and left. 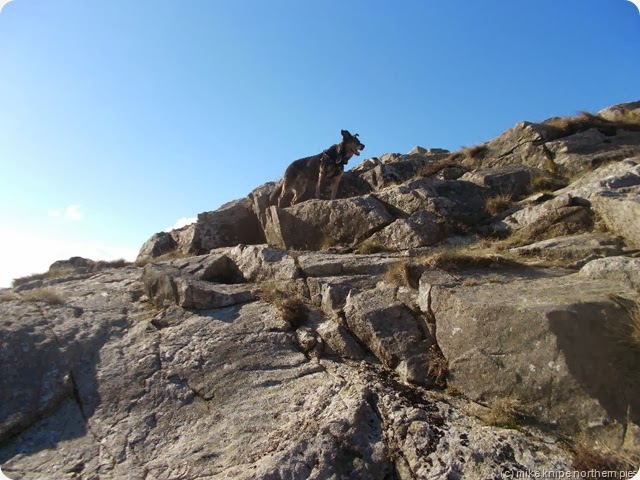 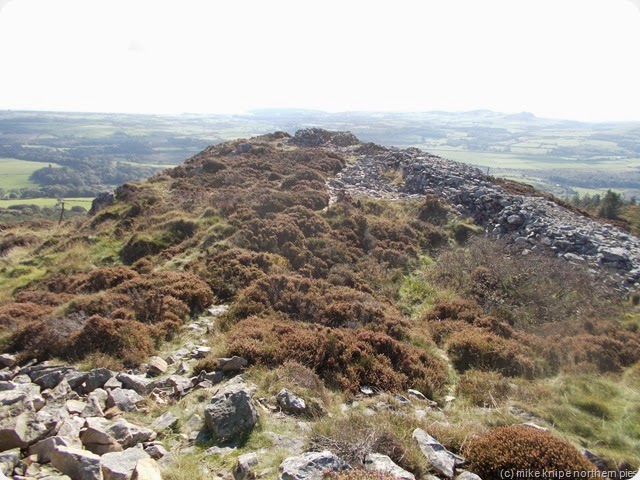 Next was Garn Boduan, which is reached by a little trespass, disturbing a cottage owner having a phone chat in her jimjams, and her little dog who didn’t like Bruno either. bruno, by this time, had decided to get his revenge in first and there was another little noisy but harmless spat. We pushed on into the brambles and trees and, by following the notional path to a better one, we climbed up through the trees to the top. The top was a fine place, rocky and sunny and just the kind of place to sit about for another half an hour. The top has a hillfort with well preserved walls and , just below the summit, the remains of round buildings.

I didn’t want to disturb the lass in her jimjams again, so I took the path down the other side of the hill and used the country lanes to get back to the car. 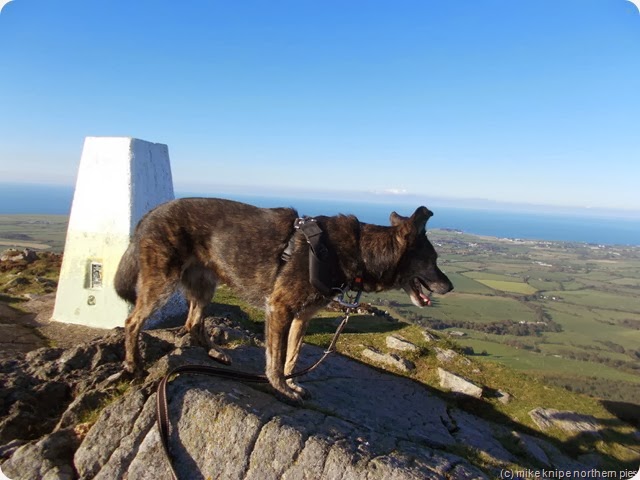 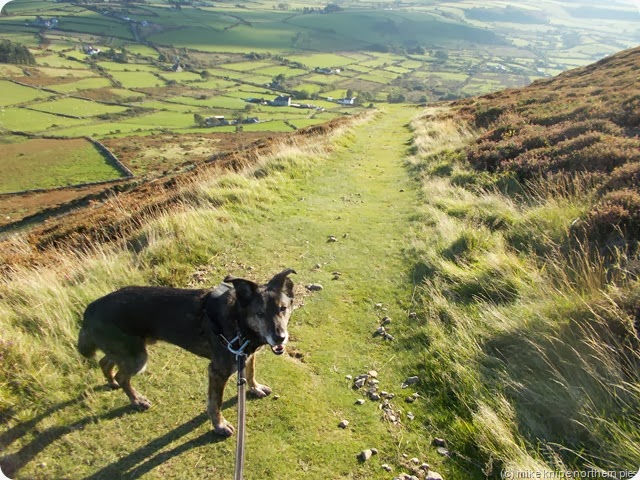 Carn Fadryn looms above this village in a way which belies it’s short stature  - just 371 metres high but very steep and rocky and covered in huge scree, and appearing more of a mountain than many a much bigger hill. The path to the top is a delight. It winds it’s way easily up through all the scree and bracken and emerges on a heathery top. The summit is an airy perch with the usual sublime Lleyn seaside views on both sides. 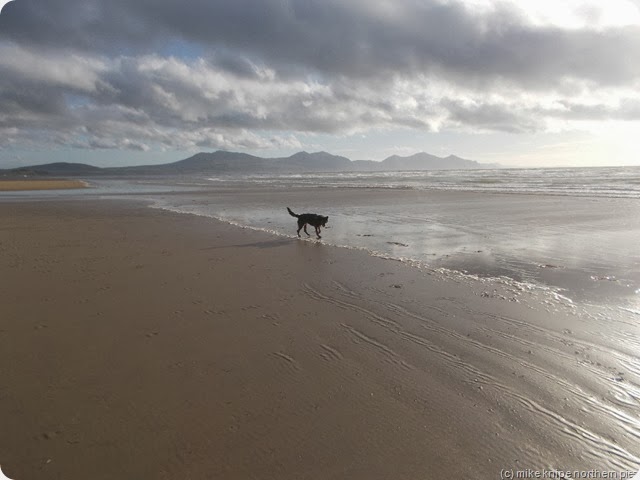 We rejoiced with a visit to the offy in Nefryn and a little paddle at Dinas Dinlle. 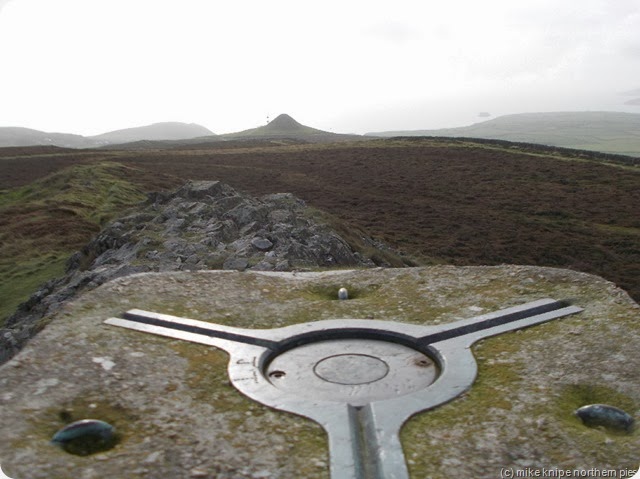 A few days later, in the face of a really duff weather forecast, we went for lunch near Morfa Neffryn (cracking lamb shank by the way…) and on a bit of a ride around, I managed to quickly bag Mynydd Rhiw, far to the West and my eighth and last Lleyn Marilyn.

Mynydd Rhiw has a wireless mast thingy on the top and is owned by the  National Trust. It also has ancient cairns, a neolithic axe factory (Axes R Us aka Just Axe aka Stone Chopper Inc) and the top is perched on a sharp little knoll. More cracking views. More paddling. 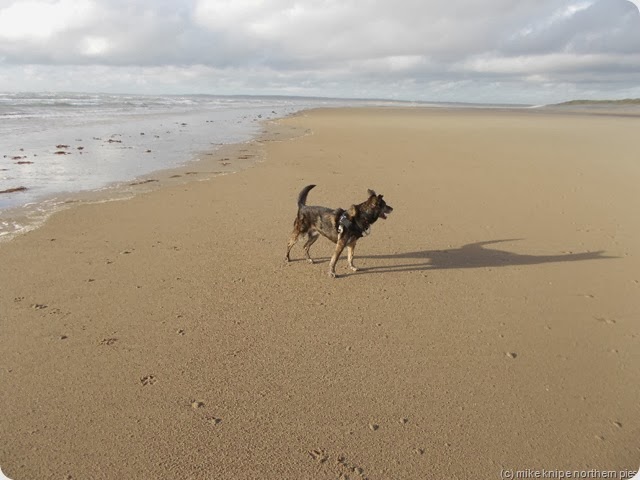 And then we came home and told our Mums all about it.

Next: back to the Pennines!

I'm off to this area to have a few days learning Welsh in November. I may struggle!

Do you always keep Superdawg on the lead on the hill? And did you know that Samsung predictive text writes 'spaghetti' instead of 'Superdawg'?

Fellobound - learning Welsh is a good idea - I just can't do the LL sound after a consonant, though. You'll notice that Bruno is off the lead on some of the pics. if there's sheep or he's knackered, he's on the lead (he's liable to dawdle and fall asleep)

Wonderful Mike,that is fantastic country. Poor Bruno, it is an odd thing with many small dogs, they can be feisty at times. Mind,some will say that it is down to the dog's owner???

Dawn - Its a cracking place (and has railway stations!) Small dogs are often maniacs. Some big dogs are too, but they tend to get taken to see the vet.

Fellbound - To be fair, the pooch did respond to some negative kita (kick in the arse). Strimming in Welsh is quite difficult y'know...