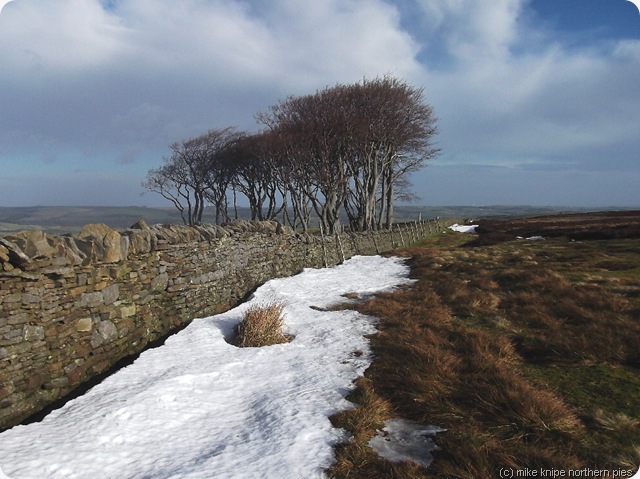 Today’s was a Durham County Council guided walk which goes from Wolsingham to the Elephant Trees, to Bollihope, Harehope Mine and Quarry and along the riverside back to Wolsingham. I measured it at 11 miles, but, inevitably, clever dicks with GPS devices said it was twelve. 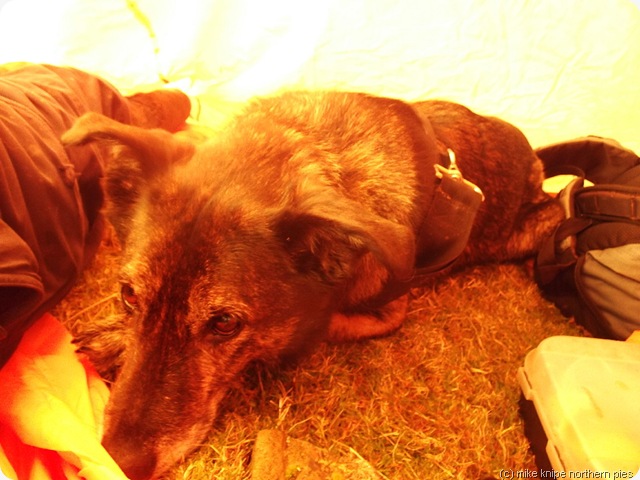 Me and the Dawg did the reccy a week earlier in a vicious headwind blowing from somewhere between Dublin and Belfast – an exhausting experience but lightened a bit by the fact that the wind was behind us on the way back. We lunched briefly in the tropical confines of my new bothy bag. This is a bit flappy for Bruno who doesn’t like flappy, but once the sun shone and the inside temperature rose a bit, AND he’d come to the conclusion that he wasn’t going to get any of my beef spread butty, he dozed off. I came very close to joining him in a bit of a  snooze but resisted. I should learn not to resist notions like this. 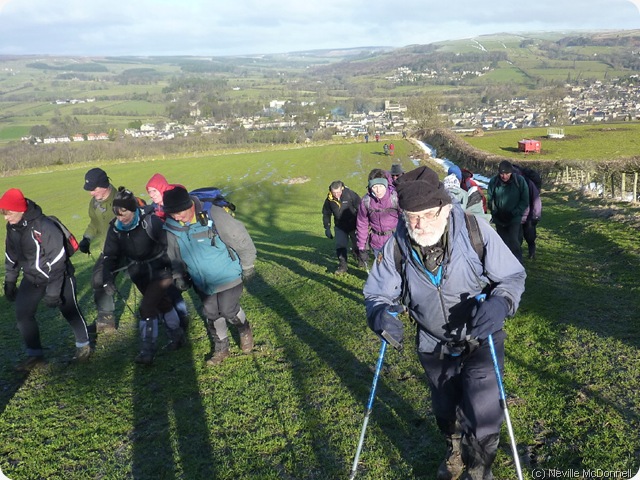 On the day, thirty two walkers turned up , so, along with the three stewards, Eric, Doug and the compulsory Dave, and me, of course, there were thirty six of us altogether. 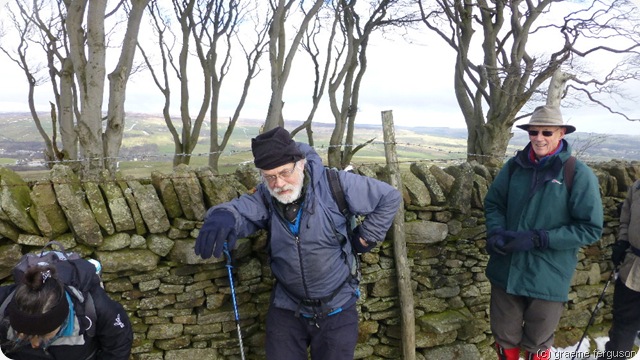 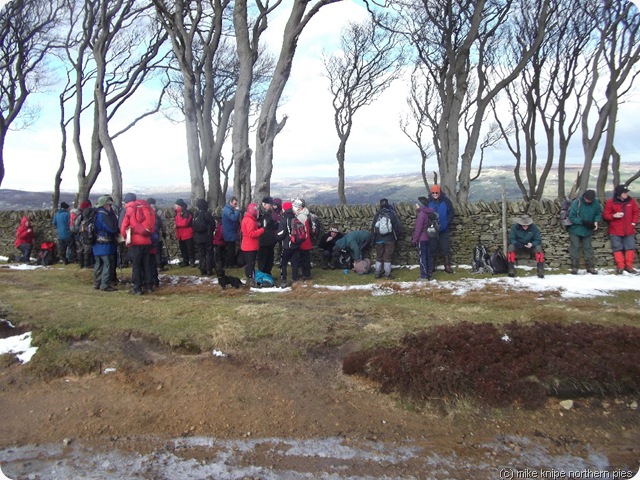 The weather was refreshing in a chilly kind of way, this time arriving in a lively manner and without hindrance direct from the North Pole and far too cold on the tops for sitting around or having yer walk leader (me) pointing out interesting rabbit holes or bits of gorse or whatever. 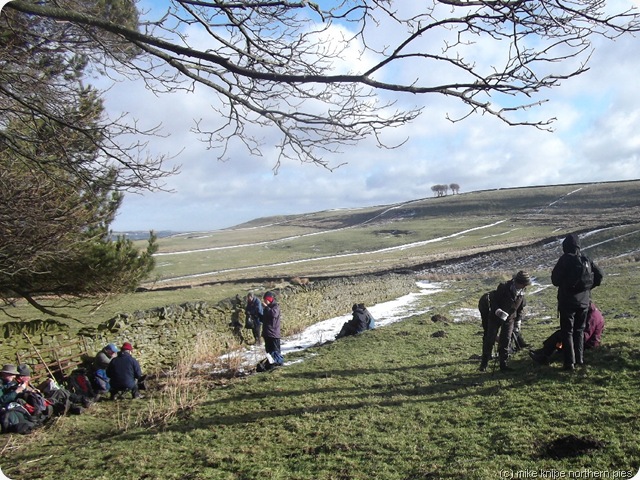 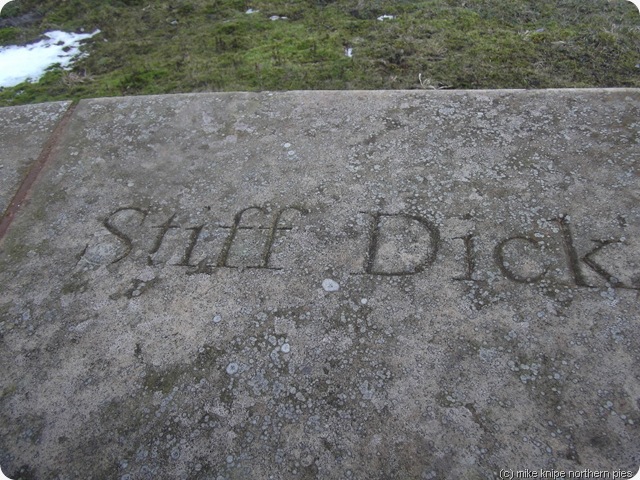 We did find a sheltered(ish) suntrap for lunch but no pontificating from me was endured until we’d descended to the more gentle climate of the Bollihope Burn where we enjoyed the carboniferous limestone, the cowboy pass, Harehope mine, the lump of Frosterley marble and Harehope quarry where several of the male walkers were seen pointing and giggling just like they used to do in Form 2(b), at the rude names allotted by the quarry men of old to some of the bands of rock in the quarry – names inscribed on the top of the wall of the quarry observation point.

It’s a walk of two halves and will appear once again in the summer programme when we will be able to enjoy the fabliously green views of Weardale, the balmy moorland breezes, the larks and pipits singing high in the sky and the midgies and blackfly at the lunch stop in the gill at Fine Burn. 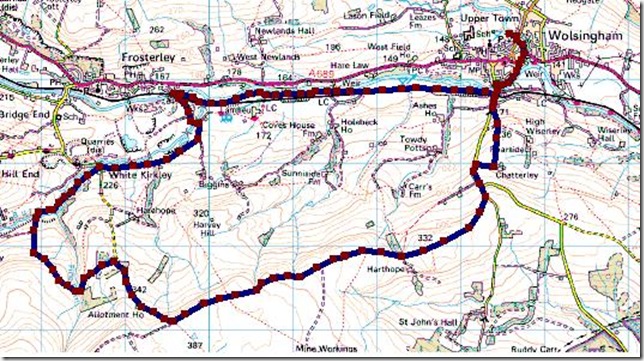 Thanks to Neville and Graeme for the pics. I’m off to Yorkshire now for a spot of camping with Dawn – there will be a short hiatus or gap. Behave yourselves. Neville will be in charge of the blackboard and chalk and will write down the initials of anybody misbehaving on the board using a five bar gate method to indicate the number of misdemeanours.

Never resist a snooze Mike, we've discussed this before. Have fun!

I'm amused at the thought of coming across a walker and his dog happily snoozing away the afternoon in a bothy bag!
Once did a race and found a marshal fast asleep in his orange bivvi bag. We scared the bejesus out of each other!

Louise - Y'know I can't resits scotch or a nap - or both...
Chrissie - I'm beginning to suspect you're stalking me using a time machine - cleverly being ahead of me by several years....
FRG - I once got accused of being dead whilst snoozing in a bag wiv me dog. The dog barked, which is what woke me up. I think my "discoverers" were disappointed.