Baldersdale Without Bleakness Would be Rubbish 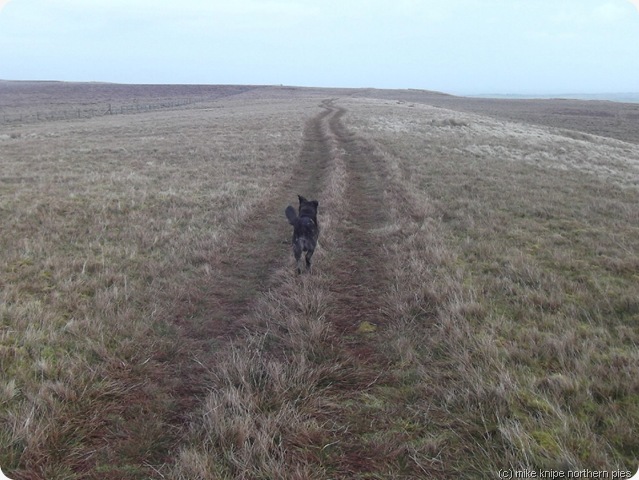 It occurred to me yesterday, as I was being jostled along by a lively Pennine breeze with a dark and heavy sky glowering over my shoulder and as the Dawg chased things that weren’t there and relieved his itchy moulting back by wriggling about legs skywards in the sheep-chewed juncus, that there’s a certain joy to be had from sploshing across the bogs in weather that many people would class as less-than-ideal. (Specially when the new boots still don’t leak!) 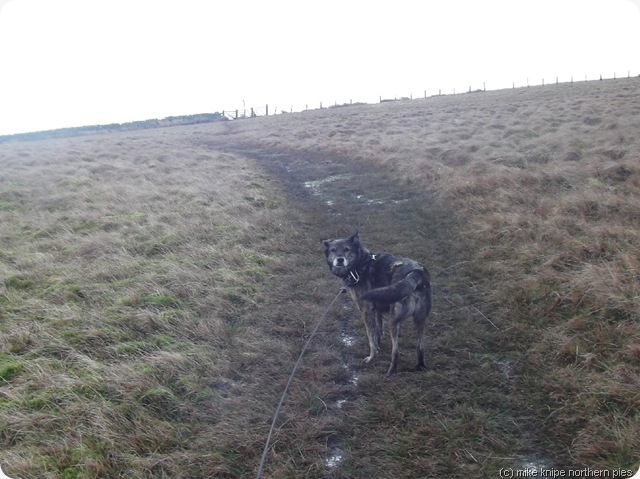 This notion has probably occurred to me before, probably, I should say, on the day before in the bright blue and sparkling snow-covered Long Crag whilst being scoured by a wind of evil intent. Refreshing at least, to say the least and creating a facial glow that even an old and bearded wrinkly could appear vaguely healthy for at least an hour or two afterwards. 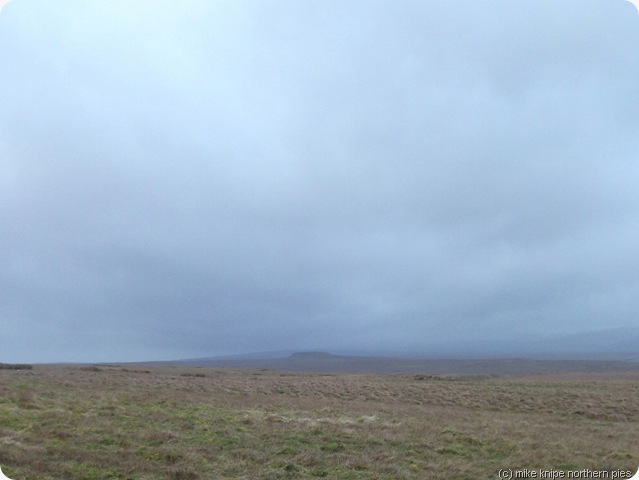 It is pure joy, really. It’s probably why I do this sort of thing. None of this bollix about being spiritual or communing with nature or finding myself (I often/sometimes know where I am), it was more to do with… er….  sort of…   putting a finger on it…… now you ask….. 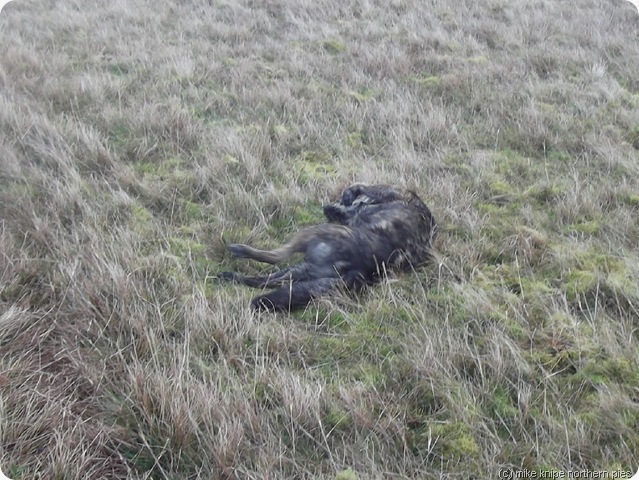 Me and the Dawg were doing yet another reccy for a walk that’s to be had in the spring – now scheduled for the 14th of April. I expect that the weather might be quite refreshing on that day too, as it often is in April. There’ll be lambing showers, no doubt. There’ll be a need for a place for shelter. 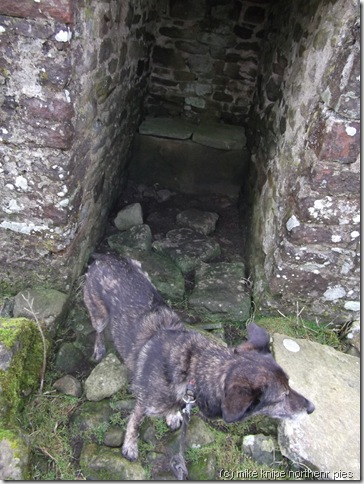 And the place for a shelter will be the abandoned and ruined sixteenth century farmstead of West Loups’s (the apostrophe is not an accident by the way!) This is plonked squarely , or at least, roundly within the banks of a previous, mediaeval farmstead. And all around, to be hunted amongst the rank grasses , are several boulders sporting cup and ring markings. I have the grid references. The very best place, though, amongst all of these things is the ancient privy – a double-seater, cosy inside and roofed with dangerously heavy sandstone slabs. You wouldn’t want to make too much noise in there….  It’s the only building left with a roof. We just have to hope that the Battle Hill firing range is not active on the day, even though the risk of being shot seems minimal, the place is on the inside and inside is where you’re not supposed to be when the guns are blazing. 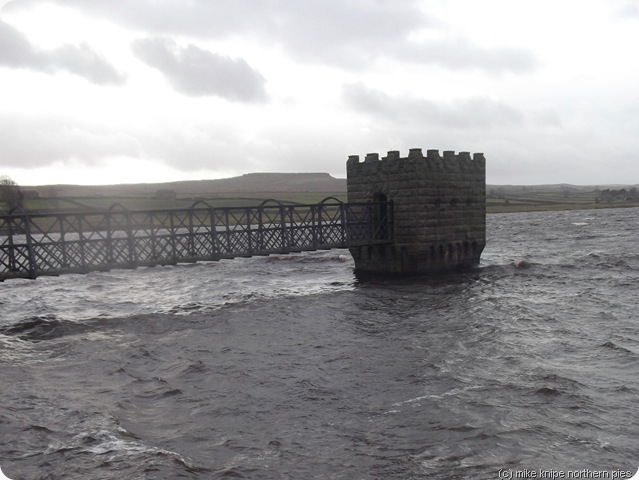 The fight against the headwind by the reservoirs in the slippery sheep-poddled mud was less fun, though, I would say. 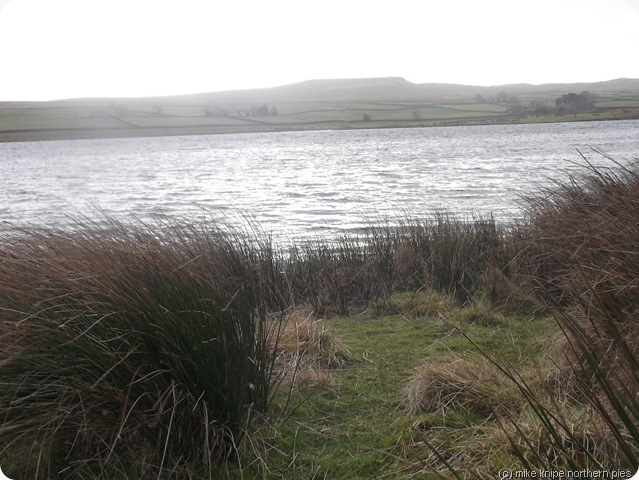 In the end, the route turns out to be eleven miles, which is just as well, because that’s what it’s going to say in the brochure. Here’s a map. 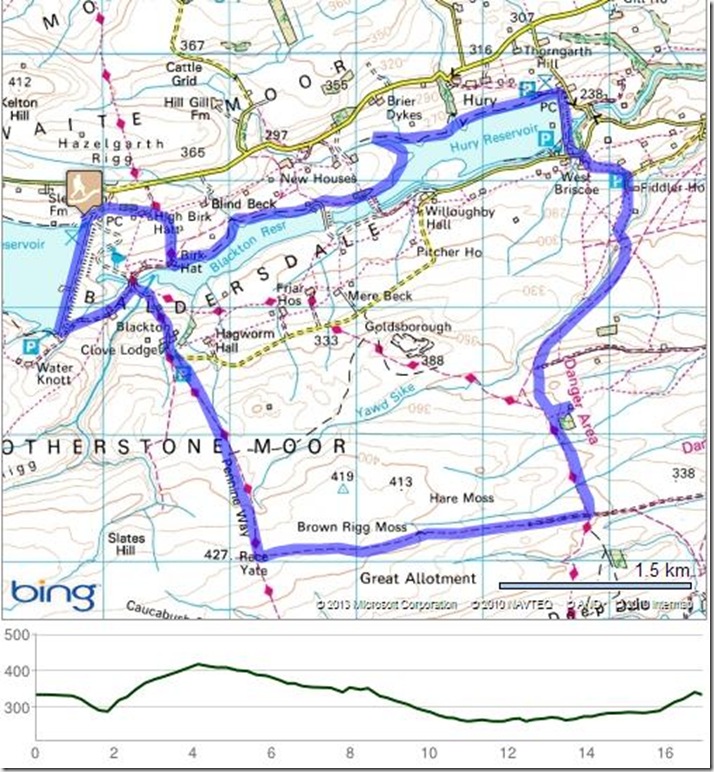 It's funny, I often find I've already walked many of your walks. In fact - vaguely connected with this Baldersdale walk - I've sat on top of Goldsborough eating my sandwiches, more times than I can remember........

Thanks for posting my ears picked up at the mention of cup and ring markings around
West Loups's NY 96698 17233
14th of April - refreshing weather ? doe's that mean free beer from the sky and pies like manna ?

I've just had the map out and noticed a Chalybeate Spring called "Burble Well" 1.37 miles North East of West Loups's, what a great name I know your into them so did you have a look ?

Chrissie - The top of Goldsborough is a fine butty-eating spot on a nice day. There's a few rock climbs as well, and a fair bit of climbing history..
Dan - There seems to be a bunch of cup and ring stones around there - mainly quite difficult to find. But Burble Well -ah yes, we had a guided walk to it. There's a blog post on this very blog, in fact. It's two very deep wells covered by manhole covers in an orange bog (hence the chalybeate). Its all very soggy. Just follow Burble Beck. Guided walkeees were underwhelmed.