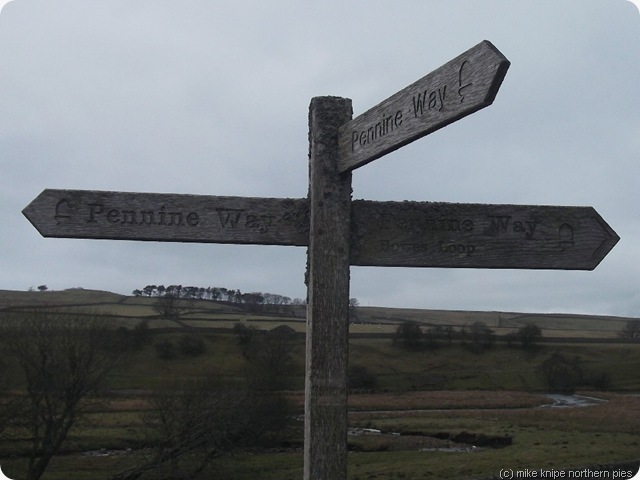 Due to some pretty ‘orrible weather midweek, during which the world iced over, a bit of a traffic jam of “things to do” has built up. I have relieved some of the pressure by having a rangering weekend. 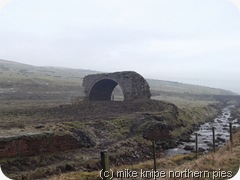 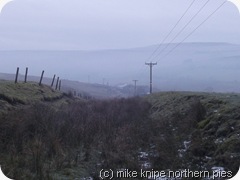 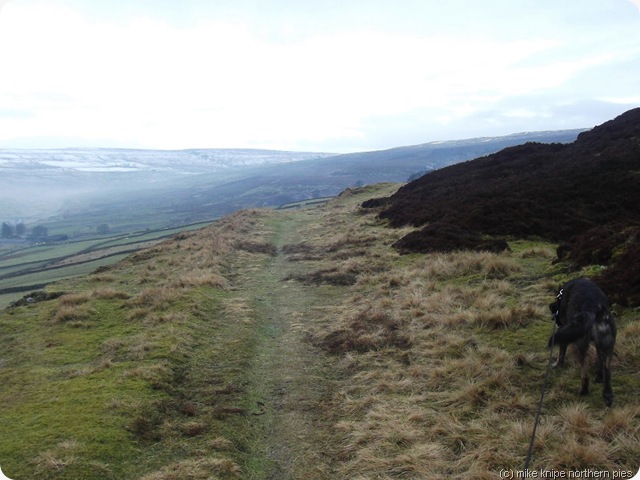 Rangering Thing Number One was the reccy for a low level walk at Rookhope which will take place next Friday. This was a nine mile walk from Rookhope Arch to eastgate and back on either side of Rookhope Burn Its all very nice and pleasant. usually it’s all very nice and pleasant. On saturday it was as slippery as a Government Health spokesman. I very nearly ended up in the beck at one point, although Superdawg showed off by running backwards and forwards over the bit of tilted ice that was defeating me. I climbed up through a fallen birch tree. No dignity was preserved. This walk was actually inspired by the chap with one leg whom we’d met in the Cheviots the other day. he’d done the walk , or something very similar and pointed me at some footpath problems he’d come across. A thaw is currently in progress, so, probably the tilted ice with a ten-foot plunge into a rocky beck issue may have resolved itself by next Friday. 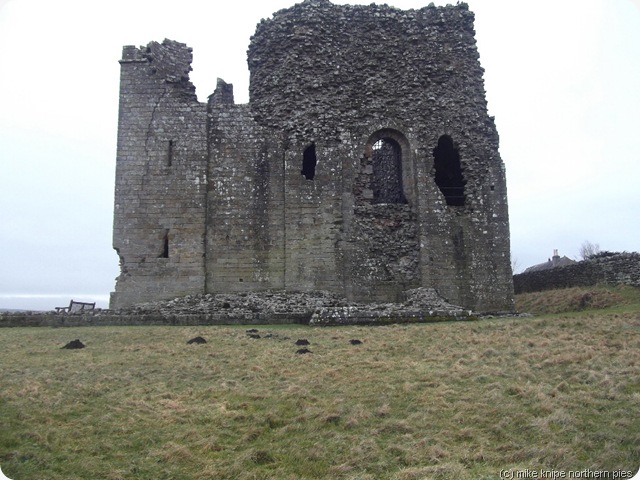 Rangering Thing Number Two was a reccy for the summer programme where we do the Pennine Way section through County Durham. This time it was the turn of the Bowes Alternative, also known as The Bowes Loop. You’d have thought this wouldn’t need a reccy. Not so. A key path has been diverted. Its an improvement. But its a change. 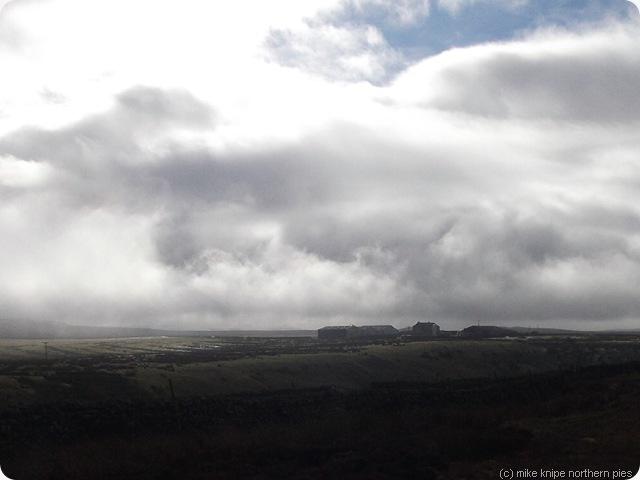 The village hall car park was occupied by lots of walkers putting boots on as I arrived. A few puzzled “I don’t recognise this bloke” looks were shot in my direction, but I did recognise one or two people from County Council walks. It turned out that Crook Ramblers were starting from Bowes Village Hall car park, as were two parties from Barnard Castle, a chap who thought he was in Brough, and me.

First of all, we wandered up the Pennine Way towards Tan Hill. We got dislocated twice. But eventually, we found the key junction and headed North over to Baldersdale. 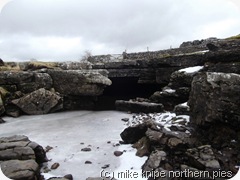 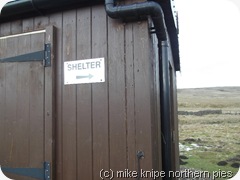 If anybody is heading up the main Pennine Way route and it’s duff weather, note that there’s a new shooting box by the bridge over Deepdale beck and one side is left open as a walkers’ shelter. Its fairly small and there’s no fireplace, but its quite snug and there’s chairs and a paperback book to read. 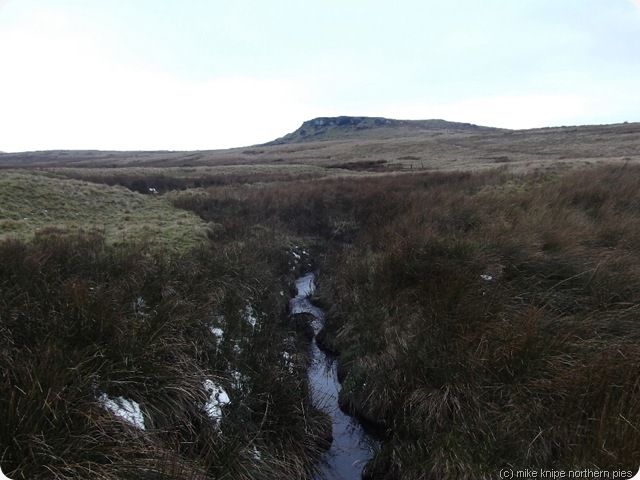 And from Baldersdale, we headed back on the loop over by Goldsborough, Levy Pool and the Ex-Chemical warfare base just North of Bowes. It seems that there’s currently a project in prgress to assess the polution from the site. Its a very big site and a map on a post shows “burned areas”, areas affected by mustard gas, areas polluted with arsenic and, a bit sinister – a graveyard.  There’s sheep grazing on it , though, and there seems to be a fine population of rabbits. One flew past me and said “hello” as it happens. 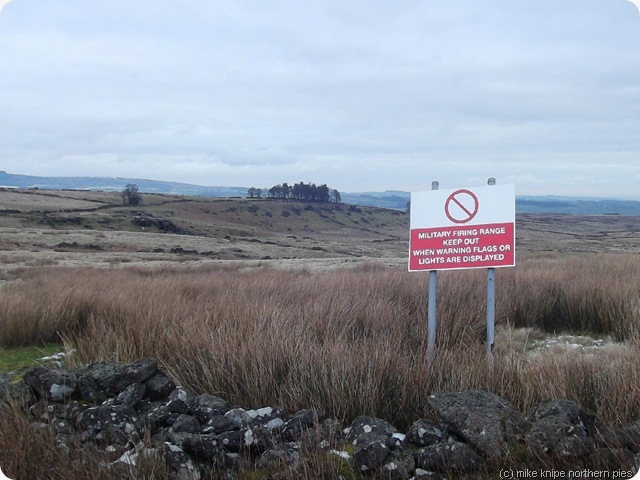 In the Wainwright guide, written in the mid 1960’s, Levy Pool is a ruin. Today, it’s a group of beautifully restored cottages, complete with traditional ling thatching. Levy Pool is also reputed to be the site of a roman dam which fed a leat which in turn fed the Roman fort at Lavatris, aka Bowes. Lvatris appears in the unreleased Carry On Up The Wall starring Bernard Breslaw as Koppitoffius, the British rebel Prince, Sid James as the scheming Roman Prophylaxis salesman Stickituppius and Kenneth Connor as the effete Commander at Fort Lavatris ,  Herpes Simples  who’s ultimately unsuccessful attempts to fend off the attentions of Queen Cartimandua (Hattie Jacques) are..er…. ultimately..er…  koff…unsuccessful…..

Me and the dawg did 24 miles altogether. All very misty and Pennine…

Interesting to hear about the shelter at Deepdale Beck, is there enough floor space for 2-3 to kip?

Wow, 24 miles and in poorish conditions. Nice one Mike.
I can’t remember there being a shooting cabin last time i passed that way. Mind you it was probably a good 8 - 10 yrs.
Good of them to consider walkers anyway.

That sounds a long walk Mike.Good photos.Bet you and Bruno where tired after that one.

John?Alan - The shelter wasn't there in 2006 and seems to be a fairly new timber building. There's room for 3 or 4 people to doss inside. Its draughtproofed and seems snug. There's a good stream nearby. The keeper probably visits regularly.
Dawn - haway.. this is nothing to superdawg and his faithful right hand man. I'm having a little rest today, though and Bruno is snoring on his dogbed.

Not sure what you're having in your tea these days (or is it beer?), but whatever it is you're notching up the miles!

I blame the NHS, Jules. My GP said I was too fat (she was right, though..) so I've been doing more. The blog mileage is just the tip of the ice lolly...
200 miles so far this year!