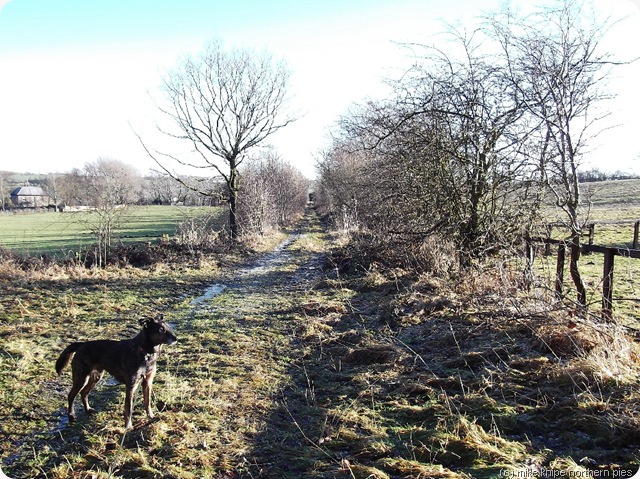 Bruno was having a barking morning – mainly at anybody who dared to walk past the house – or blackbirds – or anything, really. So after careful scoffing of a bacon butty, I suggested that as it was such a nice day, we could go out and finish the fourth walk in the Howden le Wear trilogy. You know the one I mean. The bonus walk. Anyway, it mended him from the barking, in favour of standing whining by the drawer containing his lead. 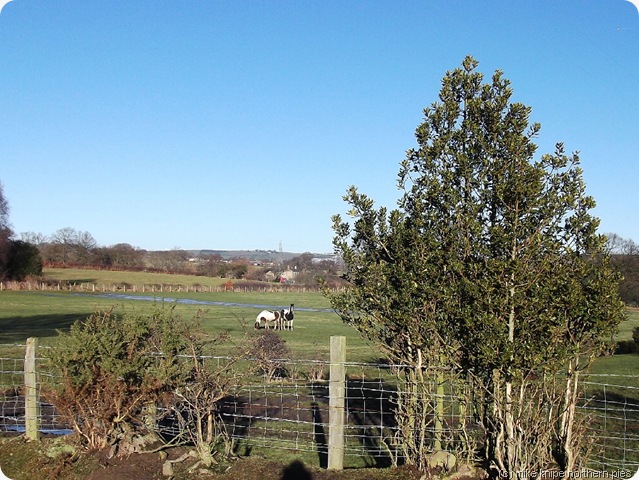 And so we did the walk. It was, indeed, a lovely, sunny day, and the temperature was reaching a scorching 3 degrees C. That’s plus 3 degrees.  Unfortunately, the overnight snowstorm that had turned to a gentle drizzle had hit the ground which has been well below freezing since November. The result was a skating rink.
To avoid the pirouettes and la-di-da’s involving close contact with the ground, I found that by leaning back and mentioning that there were “wabbits” further along, I could get Bruno to pull in as straight a line as possible and thus, avoid much in the way of effort at self-propulsion. This was fine till he cocked his leg when I overtook him and unbalanced him so that a little yellow fountain was produced. This curved through the air in a graceful arc and produced a beautiful rainbow. Obviously. 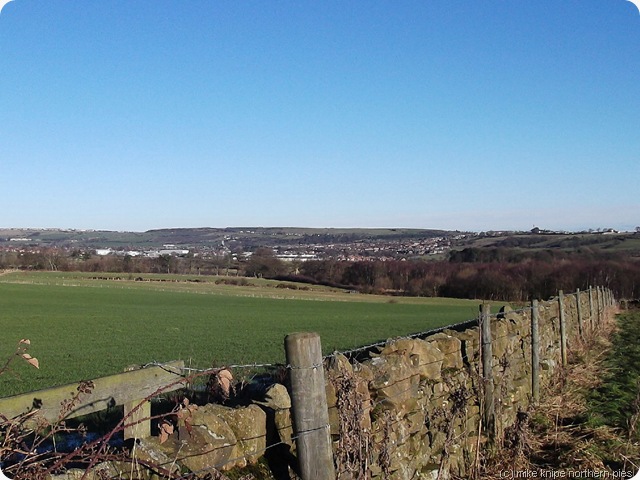 Soon, we were in Howden le Wear and doing Walk 4. This goes through lots of fields, some of which have been mined for coal, initially in bell pits, then in proper pits with black-faced miners and stuff, and then in huuuuuuuge open cast holes with tonka toys at the bottom. They put all the countryside back again, but not necessarily in the correct order. Its very smooth in parts. 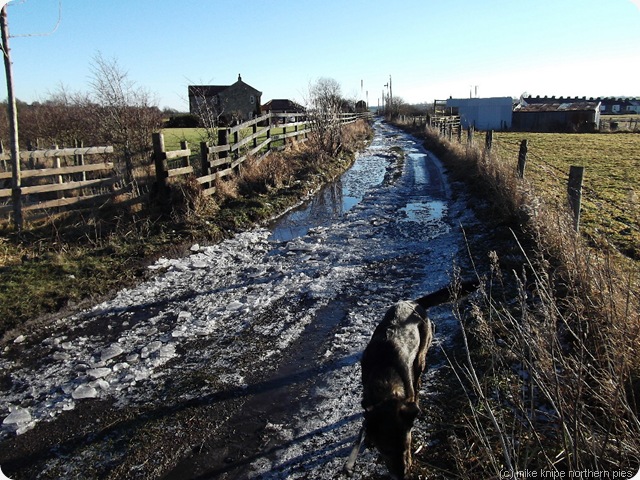 We crossed an old tubway from an old coal mine. The old tub being played by me, post Christmas and, thanks, I’ve now completed my quest to rid the house of fine whiskies and tins of beer. This is just for anybody who was worrying about how I was coping with all that liquid.
The stiles were all, generally OK. One was a bit wobbly and another had some hawthorn which was a bit over-familiar with my jacket. It needs some government cut-backs.
The walk description is mainly OK, although there’s a few things that could be improved, I suppose. 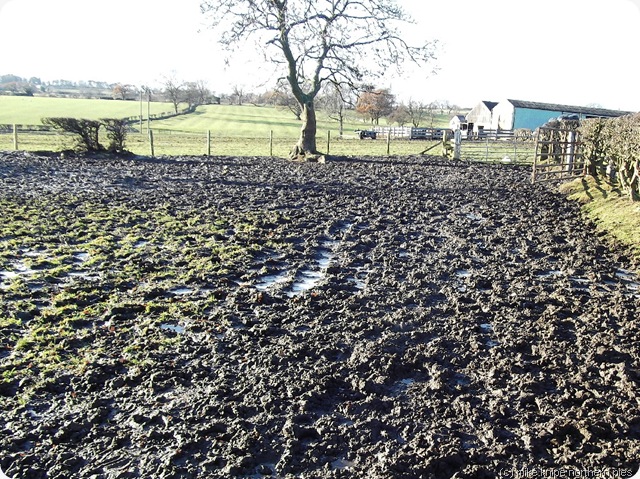 And it was outrageously muddy around Field House farm. Luckily, at the moment, the mud is frozen solid. It’ll soon thaw out, though, and anybody fond of their wellies should note that they’re likely to lose one or both to the morass.
What it really needs is six girls in bikinis acting out The Battle of Marston Moor with handbags.
The walk is three miles and links up with the other three walks. Me and superdawg did six. Cos we’re brill, innit?
Its a good walk.
And that about wraps it up for the Howden le Wear walks. 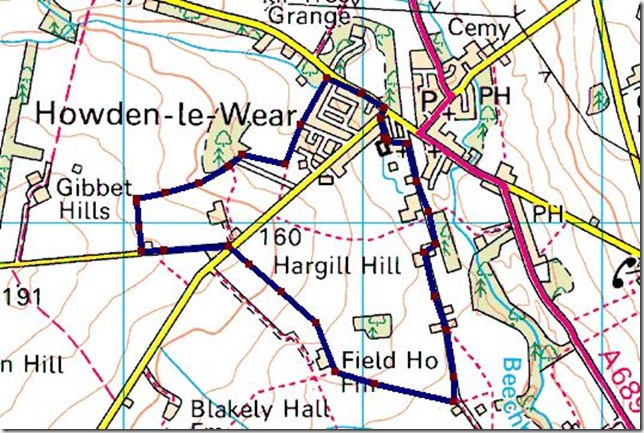 It's bizarre to see local walks that have so many of those brown squiggly contour lines. On my local round I cross one contour line, twice, obviously, as it's a circular walk...

It can't be good for a boy to achieve such elevations. There will be headaches and nosebleeds.

HNY Mike and S. Dawg! I love your little walk blogs!
I've been trying to put maps up on my blog but can't seem to make it work - what am I doing wrong?

They're very gentle contours up here in Pieland, Alan. Not as many as on some of your TGO routes...
Laura - I do ctrl - print on the mapping software and copy the result into "Paint". Then I cut out the bit I want, paste it into a new Paint file and save it as a jpeg.
This is then attached to the pieblog as a picture.

I wouldn't like to try to walk past Field House today as its been persisiting pretty much all day.
A person could lose his wellies....

Gerry snipers
Have you checked out this (my) Blog
http://teddytourteas.blogspot.com/2010/12/teddy-tours-druids-temple.html
cheers Danny