I’ve been spending some of today making mincemeat buns – an easy recipe – and I’ve made a chocolate-covered flapjack in tribute to the famous jockey Willie Carson.

Really loyal piepeople may remember the cake I made in tribute to Arsenal FC last year, where, due to a lack of forward planning, I couldn’t get the full word “Arsenal” on it, so the icing was somewhat foreshortened.

This time, the flapjack is ginger-flavoured and has raisins and sultanas and crystallised ginger in it.

I still get hits from people searching for “Arsenal Cake” by the way, although I’ve not had many death threats about it recently.

I’ve been doing this baking as opposed to going out and walking up Birks Fell in the Dales, because its been wild and windy and, above-all, wet. A real number one autumn gale-type storm.

In the meantime – I give you – The Willie Carson Tribute Cake 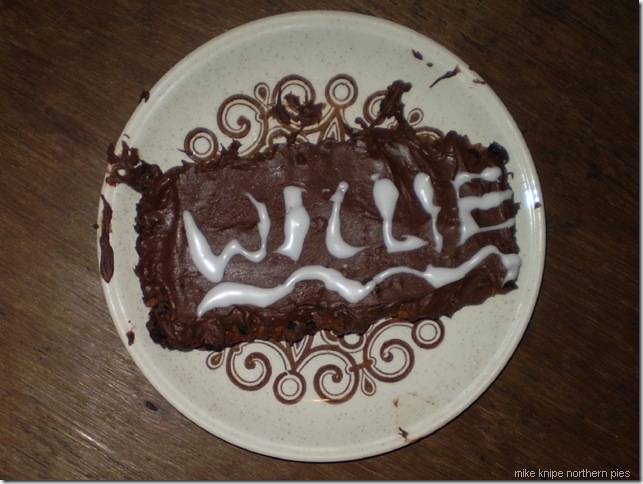 Please don't do a tribute cake to Scunthorpe Town. Birks Fell - one of my favourite caves. It's wet here too- tropical style. Oh for some cold weather!

Hello Tony - I hope you're sweating your pants off over there in the Mouldives... Its a bit breezy here, but not too cold yet - though, I believe the wind chill for tommorrow is -11C.
Must take a warmer for me cake.
Scunthorpe? Naughty!
I had a look in Birks fell cave once - vairy interesting...

hmmmmm slurp... (its really just porridge oats, honey and marge and whatever else you want to put in it.....)
The next one I make will be paces on the Pennine Way - starting with Shitlington Crags... It'll need to be bigger, obviously.

We've had some shocking wet and windy weather recently. So much so that I have jars of green tomato chutney and homemade mincemeat in the cupboard, (seperate jars, incase you were wondering...) dozen and a half homemade mince pies (made with fore-mentioned mincemeat) and another of bread rolls in the freezer and a Christmas cake (awaiting weekly annointing of brandy).

'Mazing how much baking one can do when the weather's vile.

Not much left of the willie cake...
Its all useful stuff, though, Louise - nice warm kitchen, with baking smells... what could be better on a mizzly day.
Next time, I'm doing Bara Brith - but the fruit has to soak in hot, strong tea for 8 hours first, so its an ideal cake for having a bit of a vino collapso and a snooze...