As Slippery as Eel Crag 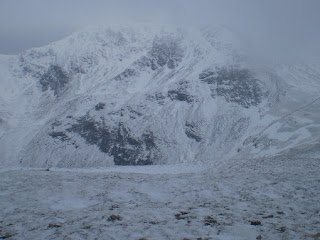 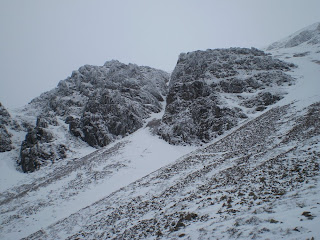 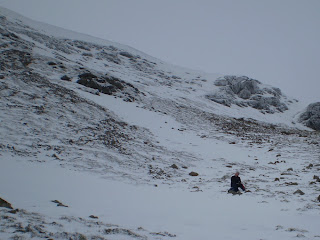 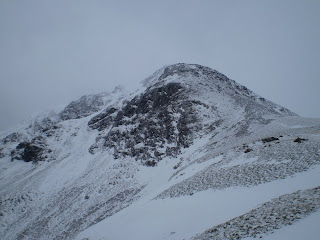 As there’s been much ado on the news, most of it pretty hysterical, about some snow taking bits of the UK by surprise and giving the people who manage our education system an excuse to order a National Holiday. I thought I’d travel Northern England’s roads for, say, a 160 mile round trip and play in some snow with my crampons at the same time.

The results in some ways were a bit disappointing. The A66 was promising with ploughed-up snow walls on either side of the road just a tad over the roof height of the knipemobile. By Warcop, though, the landscape was green and in the Lake District there was just a light covering of fresh snow and some fairly big patches of old frozen snow. At low levels, it was green.

I met my brother at the little car park up the hill just outside Braithwaite and we marched off manfully, ice axes swinging in the light breeze to tiptoe up the Ledge route – a way named by that bloke Alf as a more interesting way to get up Eel Crag. Alf also mentioned an "easy" scramble just next door called Tower Ridge.

The route went fairly well for a while and we soon found ourselves floundering up thin snow with frozen plantlife underneath. There were times when the struggle became desperate and just a bit dangerous, so we strapped on our crampons and continued.

Somewhere quite close to the top, we bottled it at an exposed steep snow slope and retreated with some difficulty down steep frozen snow for a lunch by an old sheepfold.

Plan B was hatched. This involved a diversionary raid on the summit of Grisedale Pike via some lovely stretches of neve and quite a few bare patches.

On the way we met Ann and Alvar, my 2008 TGO Challenge vetters on their way down after traversing the hill we were struggling up. Nice to have a little unexpected encounter like this. We had a TGO challenge chat.

Grisedale Pike was hard work but uneventful and the path descends to the car park which avoid plodding back up the road out of Braithwaite.

The roads home were quiet and fast although I did get gritted three times altogether.

We’ll be having another crack at our abandoned route later in the year. Just didn’t feel right at the time. You have to follow your instincts sometimes. Due to the series of warm winters we’re badly out of practise with the crampon and axe thingy and just remembering how to strap the things on was difficult. But, if the winter continues in it’s current vein, we should be quite expert by April.

Incidentally, a few years ago my old dog Jenny chased a meadow pipit over the crag on Eel Crag. I had to carry her back to the car afterwards. She “fell” about 600 feet altogether and then climbed back up again. Remarkable. Cost me loads of money at the vet’s and I did learn the doggy word for B****X. Is it a plane? Is it a meteor? Is it a black and tan mongrel?
Posted by Mike Knipe at 21:36

That's spooky...the story of your dog and the crag.
I had a dream/nightmare a week ago where the Fatdog did a similar thing. Freaked me out a bit. I nearly always have her roped up anywhere near crags or cornices.

I've had various doggy incidents on the hils over the years - caught one dog by its tail as it hirtled past me on Gimmer Crag (!) another fell down the same pothole twice in ten minutes, then, later, ended up at the bottom of Hull Pot, and yet another jumped over a wall in Halifax and plunged off a thirty foot gritstone crag. All without injury or even acknowledgement that something scary had just happened!
Keeping fido on a leash avoids these sort of excitements, though.

We do seem to adopt insane mutts!

There does seem to be a bit of a gung-ho attitude from some of these dogs Becky. Maybe we just get the dozy ones....?

Jenny was the original superdawg. She was a bit too daft

I knew there was a reason why I don't take my Labrador on the hills. On a lead he is a nightmare. Hence he does not come with me. That and the need to clean up the mess he will make. Like the look of the snowy hills. Nice being retired.

Thanks for the comments everybody.
Jenny certainly was the original superdawg - notorious at the vet's as the "flying dog".

Actually, Martin, a dawg can be an asset when hillwalking - the trick is never to teach them to walk to heel and they'll pull you up the hill.

I did once have to get a black lab over a Jura deer fence (12+feet of wobbly wire) Good job the pooch was docile, if a bit thick. Not an easy job, I'm not sure even now how we managed it...

My sheep dog Ben went for a slide down a completely ice covered Eel Crag some years ago, it was to icy and slippery for him to get back up so I did a glissade, controlled until I hit a solid sheet of ice) and we both tumbled to a rest some 100's of feet lower down, very exciting. At the age of 15 he should have known better than going for a piss on the edge of the crag. I usually had him in a harness with a fairly long rope but that day I had left it in the car as from down below the tops looked pretty okay...having just competed all the munros and a climbing trip to northern Norway I too should have known better..flippen heck!