The Father is dead, long live the sun 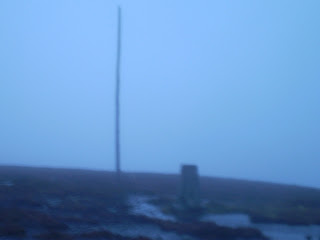 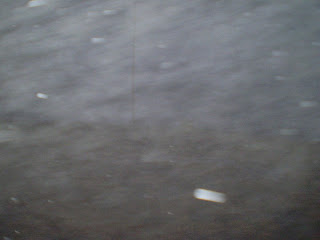 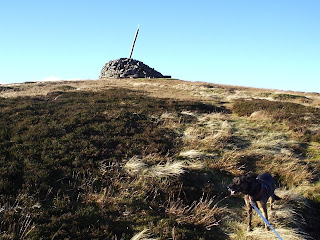 As you're probably aware, today was the shortest day - that is the day with the least daylight.
Tomorrow, there'll be just a tad more daylight than today and thus it will be until June.
This is surely something for walkers and other outdoors types to celebrate, unless you're a creature of the night, in which case it's a right bugger.
In effect, the natural year has now turned. So, to celebrate this, I determined to go up a hill and watch the sun come up (should have been tommorrow, but me father-in-law's outpatients appointments decree that it had to be today... its complicated, I'm not going to explain....)
And so, at stupid-o'clock this morning, with a large crescent moon hanging over the outer suburbs of Crook, I drove off in search of a sunrise.
It soon became clear, by the drizzle up the Dale, that this was not going to be a good morning for watching sunrises, but I was up and almost concious, so I parked up the knipemobile at Killhope mining museum and stumbled off in the dark up over the moor to the top of Killhope Law. This was quite an interesting exercise in foul weather navigation - dark and foggy and windy as it was...
Killhope is such a descriptive name, though dontcha think..... I mean, for such a hopeful day as this.
Anyway, it gradually came light, although, this didn't do all that much to improve visibility.
Somewhere over Gateshead way, the sun was rising in a coy sort of way, but here it was blowing a right old hoolie, mist hurtling past damply.
So I went to Alston to buy another breakfast and then to Brian's at Nenthead for coffee and to talk about the additional hole he's just had made in his bottom. (Its some sort of abcess thingy which needs packing with half a mile of Morecambe Bay seaweed every day. I don't want to know the horrific details, but it sounds deliciously painful and quite the sort of thing you would wish on a wheel clamper or truculent politician.
Then I went home for a sleep.
Bruno had punished the household for not being taken on this jaunt by scoffing a pound in weight of Christmas fruit cake; a present from Aunty May. He was apparently saving the big lump of Wensleydale cheese for later. Just now, he's a bit subdued whenever anybody mentions it. I'm monitoring him for signs of ill health, cos dried fruit isn't very good for dogs. He seems Ok, though.
Two of the pics show the driech conditions using two different camera settings. The other shows what Killhope Law summit really looks like. No idea what the big stick is for. On the map its described as a "mast". But it's a stick.
Anyway, so this is Yule. The old father is dead, say boo to the new born sun. This is the start of something better.
(Cue Herman Hermits track...)
The summit of Killhope Law, by the way, is just over 2200 feet above sea level and has a view which includes The Ettrick Hills, The Cheviots and lots of Pennines. Usually, well, sometimes anyway...
And the spring will bring us together forever
The lark will rise and sing from the clover
Rise to the promise of fine spring weather
Rise to the promise that winter is over.....
Posted by Mike Knipe at 18:36