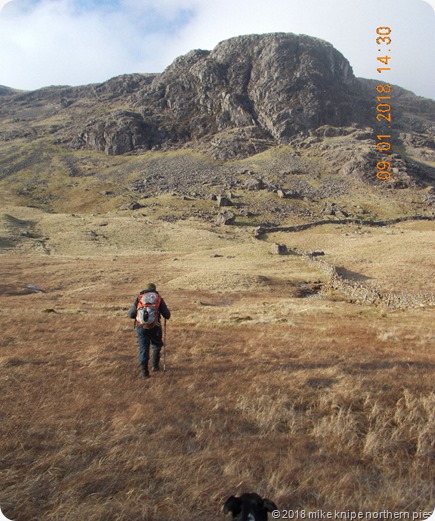 Desultory arrangements resulted in me, LTD and Dawn nicking off to Borrowdale  on Monday last for a few days camping.

Two walks were done from the campsite at Chapel Farm – this one and an exploration of the lovely pools in Langstrath. Since some people might be  specially interested in the pools, in which much refreshing dipping can be done, in conjunction with a spot of sitting about scoffing chicken salad butties and bananas whilst soaking up the hot sun, I’m leaving that for a separate blogpost. So, you’ll just have to make do with the one walk on this one. 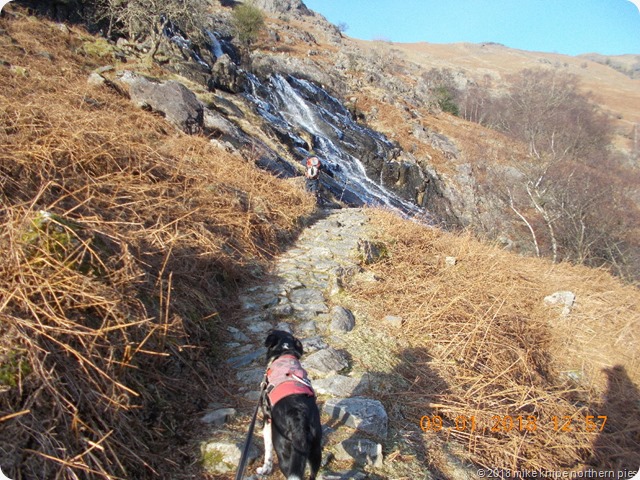 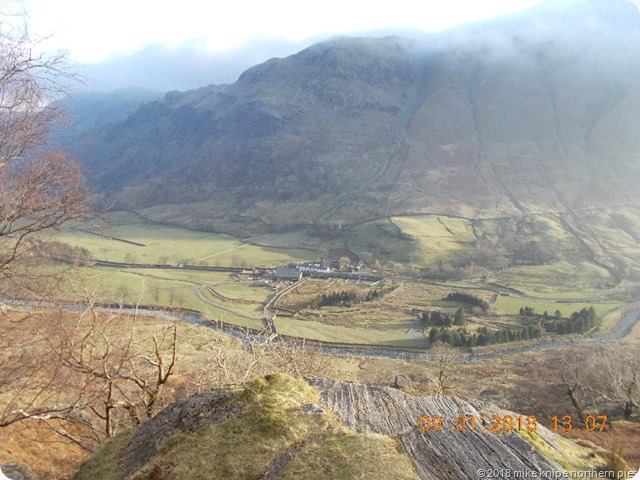 It had been specially cold over the previous few days, and Monday night was a rippingly chilly night. although, at only –2C or –3C, quite a bit warmer than it had been.

The dawn (not Dawn (!) (dhuhh) ) was typically late for early January and despite the huge amount of sleep provided by the long and dark hours from 5pm the previous afternoon, it was specially hard to wake up, particularly in the light of various interesting, if irritating dreams.  LTD was snuggled on his own mat, with a woolly comforter and an ancient but serviceable four season sleeping bag and, apparently, hadn’t even noticed the onset of daylight to disturb his 14 hours in sleepy snoozy dreamyland during which his dreams seemed to consist of various bouts of running about and barking. But we did not care, because our target for today was Seatoller Fell, a small but contoury lump just above..er…Seatoller, so not too far away and easily acheived in a shortish timespan.  We were to get there via Sour Milk Gill, a steep and icy climb with a scrambly bit. 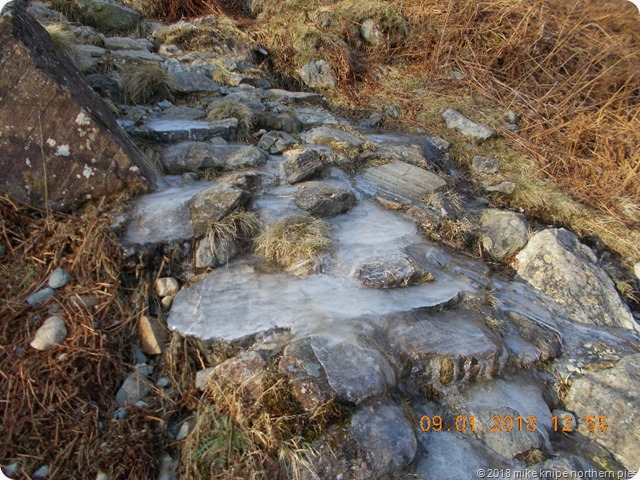 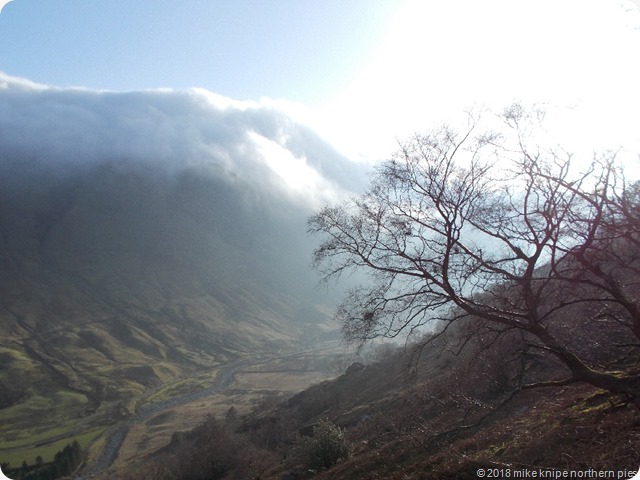 There was no snow at this level – up to about 400 and a bit metres, but the paths were icy and the becks and waterfalls were heavily decorated, although not fully frozen.

And the sun beat down mercilessly. Actually, it was a bit chilly, but quite beautiful anyway, with spectacular cloud formations pouring over nearby higher fells and dispersing as they descended. 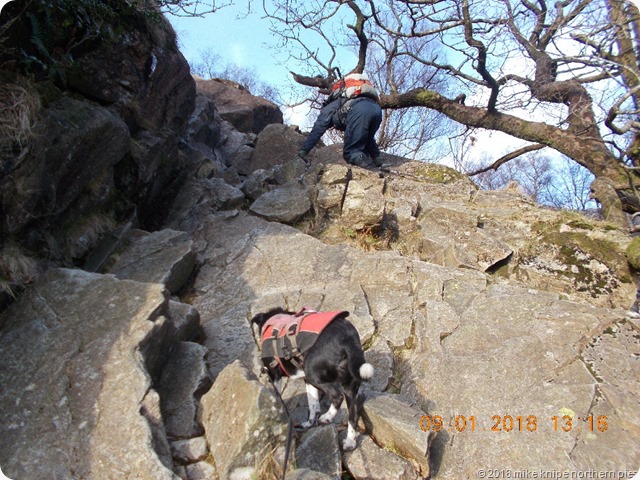 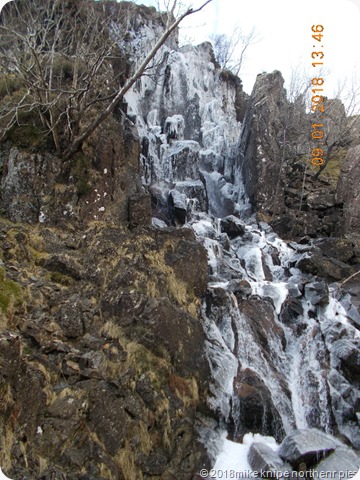 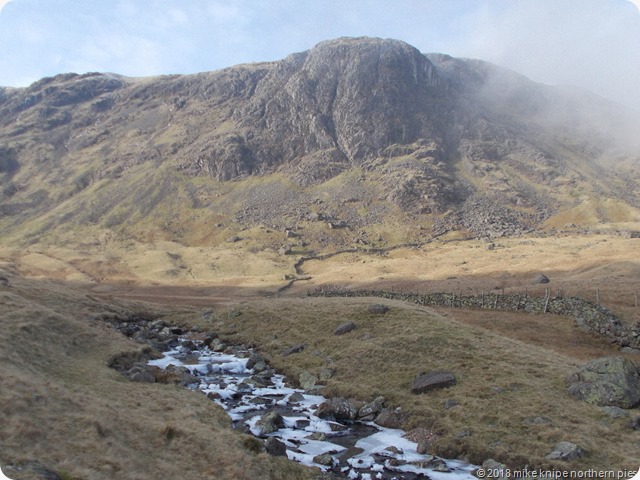 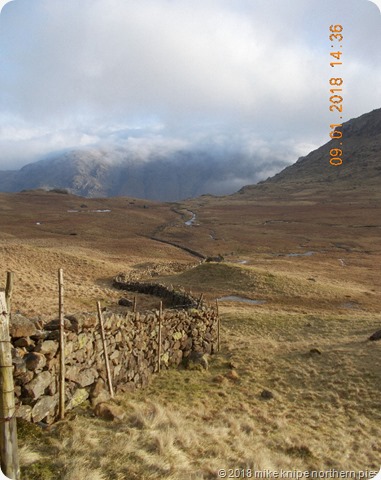 We bashed and tiptoed and heaved our way up the path, cleverly designed to hold as much ice as possible, thereby making the whole expedition just that little but more of a thrill.

From the Seathwaite slabs, a wall lead us around the head of the corrie, under the ramparts of Raven Crag and, by contouring, on to the top of Seatoller Fell.

We returned, as the light began to fade, by the Honister Pass road, which was quiet and quick.

It was just about 6 miles and 1400 feet of up, most of it squashed into a small area above Seathwaite.

Just time for soup and a snooze to build up strength for  a stewed steak and spuds tea and our main sleep later on. This is what I like about winter camping, you can get sooo much rest.   ZZzzzzzzzzzzzz

It was quite a nice few days. photos of the pools have have been given the thumbs up from a few of the swim club members. A return trip with a spot of dipping in mind??