Black Mountains Part 2 You Can Probably Do Better Than This! 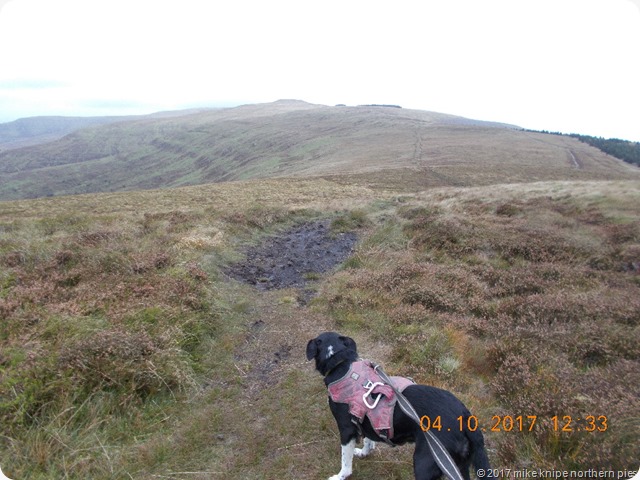 This is the second walk in the Black Mountains Trilogy Thingy. I have to be honest and say that this route could be improved significantly and I’ll point out some improvements which might be made. But y’see, I was a bit late getting out of bed and , as I reached the rather lovely table-top hill Pen y Gadair Fawqr, the weather, which had been grumbling and whingeing about having to get up so early, finally lost it’s temper and decided to give us a wetting. Just spite, really. But I terminated the joy of ridge-wandering for the less draughty options of a quick return to the car which was parked at the far-end of the route.

We began at a forestry car park in Mynyd Du Forest at Pont Cadwgan at SO267251. Just like the car park on the previous walk, this was temporarily occupied by a van containing some bleary hippies. Bless ‘em. 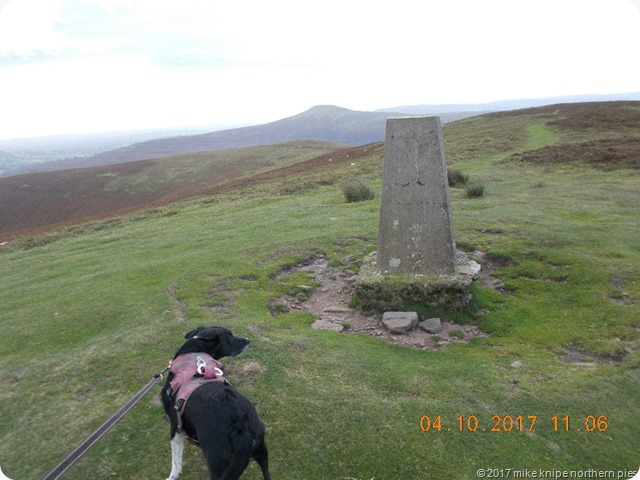 Walking in the forest on rights of way is often a bit hit and miss, particularly since forestry commission peeps usually ignore public footpaths and bridleways and provide forestry roads instead and, sometimes, often, in fact, these don’t coincide very well with the actual rights of way. In this case, the paths did follow the roads but, by way of interest, the lumberjack peeps (they like to press wild flowers by the way) (and hang around in bars) have put up signs indicating that no unauthorised persons were allowed to pass. However, this being a public footpath and, on the legal advice provided gratis by LTD, I came to the conclusion that as this was a right of way, I was, in fact, an authorised person. Not to be defeated by a legal argument, the lumberjacks had driven large vehicles across the route and churned it up somewhat. This must have played havoc with their high heels, I shouldn’t wonder. We tipitoed across without getting too muddy. 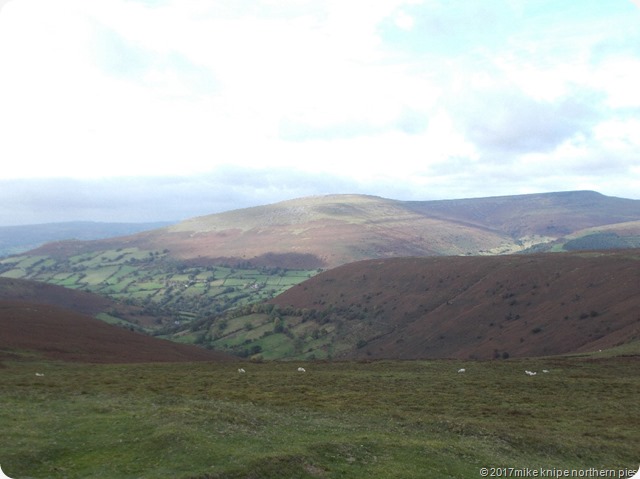 Thus, our route went by Fford-las-Fawr, which may be an outdoor centre, or somebody’s forest holiday hideaway, and up a steep bridleway out onto the open moor. An improvement may well be to head on another bridleway via Llwyn-y-brain and head up the shoulder of Crug Mawr via the Beacons Way path. Due to an attack of Bwrw Glaw Lassitude, I just didn’t think of this at the time. Dhuhhh…

The point is, that the first objective of our walk was, in fact, the summit of Crug Mawr, a Dewey with a trig point, an easy path and a fablious view. We did it as an out-and-back from the bwlch or bealach just a bit North of Dysgwylfa. (Get a map out!) 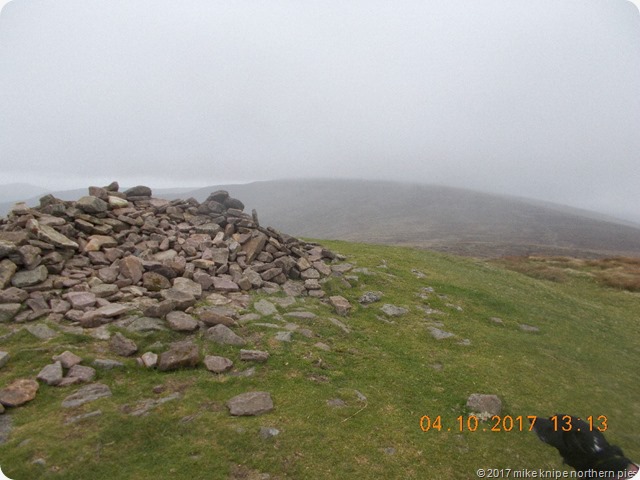 The main objective of the walk was, in fact, though, the outstanding unbagged Nuttall Pen Twyn Mawr. This is achieved by an easy path which goes along the crest of the vague, wide ridge. It’s easy underfoot providing you keep on the path, otherwise it’s a tussock-fest. As a summit, Pen Twyn Mawr is a bit underwhelming, to be fair, but the next top along the ridge, Pen y Gadair Fawr, looks quite a lot like Ingleborough and whispers to you seductively in the wind to draw you on to it’s gentle shapely slopes. 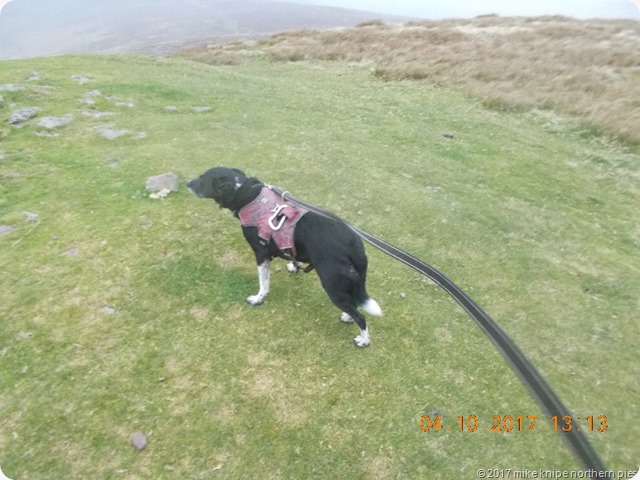 So, that’s what we did. The very same whispering wind had been getting livelier by the minute and, as we approached the summit cairn this breeze loaded itself with cold water and began spraying horizontally accompanied by a bit of a bluster. It was an easy decision not to press on to Waun Fach, which, if I remember correctly, is a bit boggy on the top anyway, but to head down, with the wind and spray at our backs, to the valley below. A nice, thin trod presented itself and we followed this all the way down to the Grwyne Fawr stream, crossed it by a footbridge and followed the road easily, damply and a bit grumpily back to the car. It’s a quiet road on a weekday anyway. I did notice an-almost-parallel bridleway which might have been more fun, but, honestly, I  just couldn’t be arsed and the potential for Forestry Commission Comedy Footpaths Department shenanigans put me off an exploration. The dog was wet anyway. The dog doesn’t like wet.

You might take a different view, specially on a weekend, bank holiday or when the kids are off school because the road might be busy. I saw no traffic at all. 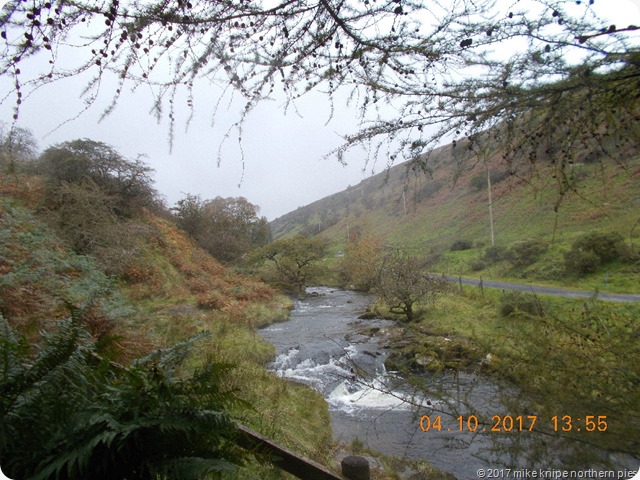 But, judging by the number of rings of stones containing old campfires and the attempts at burning picnic bar-b-ques, old tents, general plastic litter and, even lager tins and bottles (it’s always lager, innit?), it seems that the usual users of the woods are a complete set of utter pillocks. (There may not be a sufficient number of the word “utter” here, so, feel free to add a few of your own) So a wet Tuesday in October may well be preferred timing for wandering in the forest. There’s a lot of camp fire parties. More than anywhere else, I would suggest. Do they not have tellies in Merthyr Tydfil, I wonder?

Apart from the moans, this isn’t a bad walk and, in better weather and with more determination and thought, several significant improvements could be made. 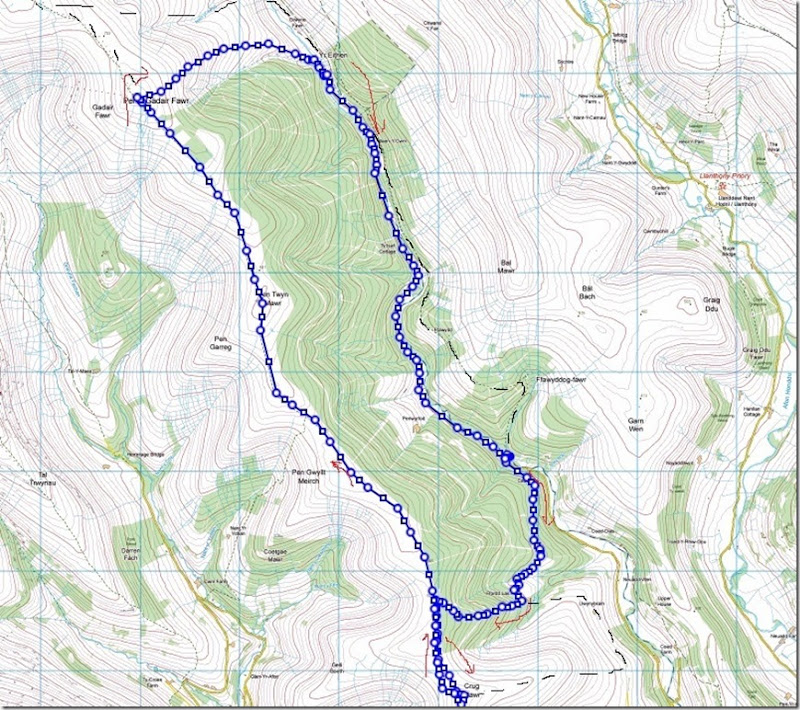 Gosh, I seem to recall wandering around that area aeons ago. Looks a tad blustery. Shame about the idiots camping in the woods.

were there any burnt remains of suspenders and bras in the campfires. Then you could blame the lumberjacks.

Dawn - Well, you've been everywhere, initt?
Chrissie - I think four poos, although, I may nit have been paying too much attention.
Ian - I did manage to rescue the remains of a red basque from one of the fireplaces. I must say, it does look rather fetching... I shudder worked for the forestry...