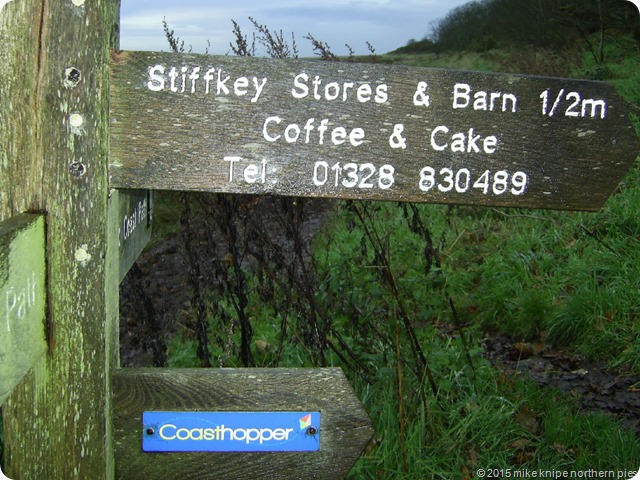 At the behest of Penny of madasamarchhhare  (click the link to have a look) I found myself in a rather plush bedroom at the Briafields Hotel in the small, but very dark Norfolk village of Titchwell, with a special kit for resident’s dog(s), but no dog. (I’d decided that the five hour train and bus journey would be just too stressful for LTD). This was good.
In the morning, overstuffed with a large Full English, the owner gave me a lift into Hunstanton to start the walk towards Cromer.
Today’s destination was Brancaster Staithe, about 13 miles away. 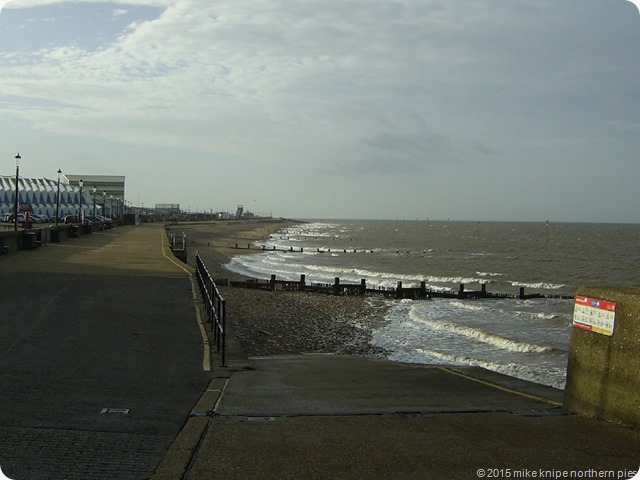 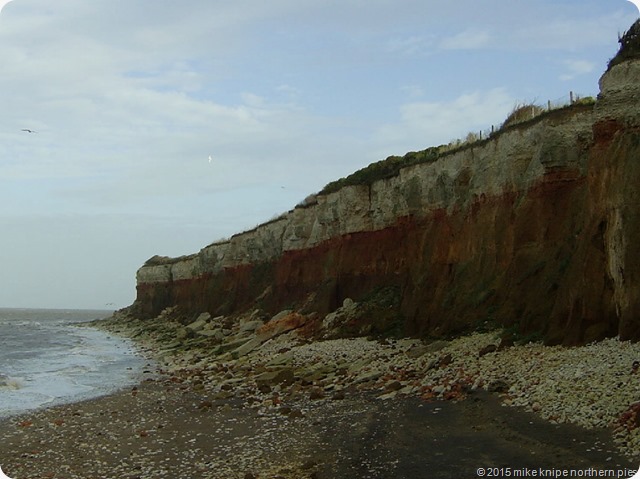 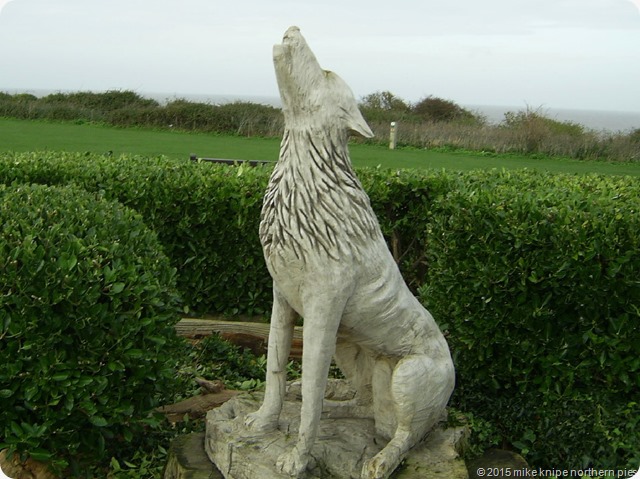 Hunstanton is where Mrs Pieman used to have her holidays as a sprog (presumably with her Mum and Dad), but nobody remembered her, so off I went in a general Northerly, then North-Easterly direction past the white-and-brown striped cliffs, St Edmund’s Chapel and the statue of the big dog  wolf that guarded his severed head after he’d had a bit of a run-in with some Scandinavians on some kind of rape, pillage,  burn and assassinate the local king Norwegian cruise and then onto a beautiful, mainly empty dune-backed beach for miles and miles. The beach is just like the ones they have in Northumberland, and so, I felt right at home, but kept my clothes strictly on, there being a bit of a breeze to say the least. Although in summer, an empty beach might well tempt the dipper…) 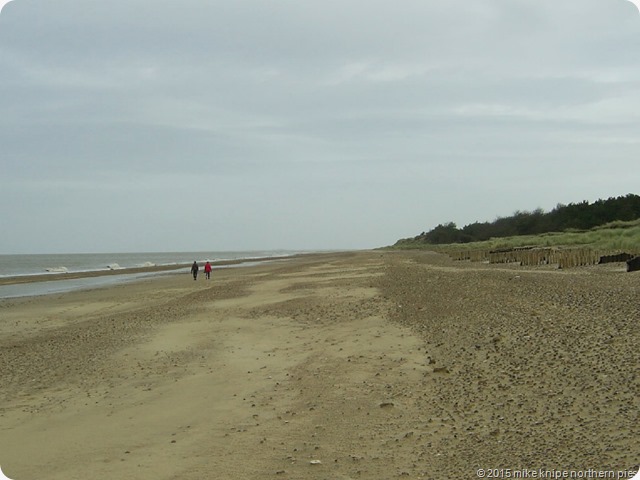 At Flaxley, there was a heavy population of dog walkers. Indeed , everybody and his dog had a ..er…  But the beach is Big in a huge kind of way and well worth a visit just for that. Take your dog if you have a dog and, if not, borrow a dog. 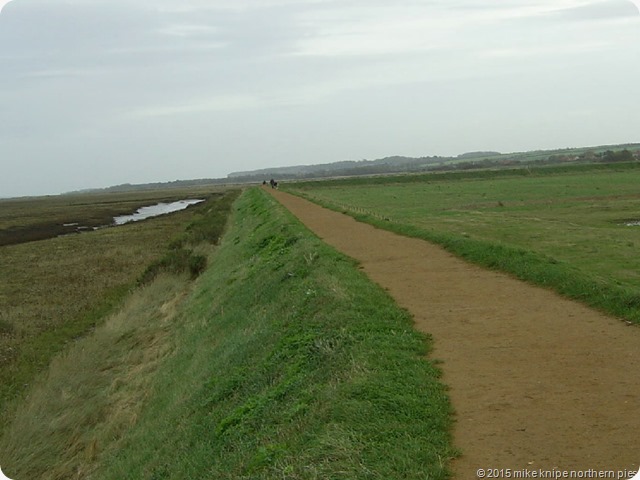 After this, the path takes to a sea-wall and provides easier walking around the marshes and into Thornham where, it suddenly heads South down a country lane AND up some contours.. Not many contours, and they’re not very friendly with each other, preferring to stay widely apart, but contours nevertheless. And then it turns Eastish through fields and a farm and then Northish again, forming three sides of a square and turning up quite close to The Ship Hotel where, suspecting a touch of dehydration, I went in for medical purposes. 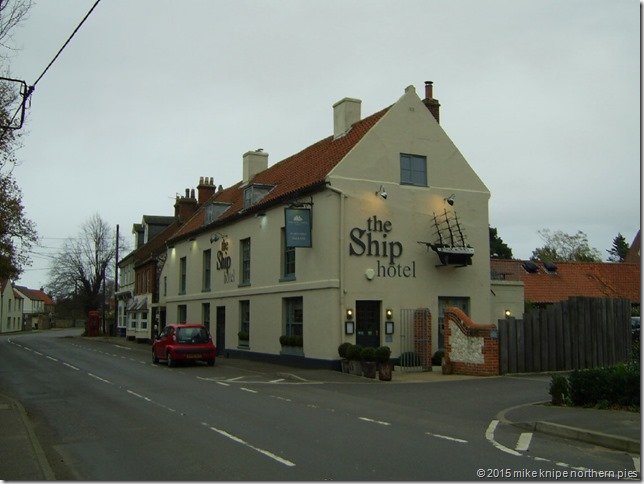 As I exited The Ship, only a couple of hours later, it had started raining, so I put on the waterproofs, hid the camera in the rucksack, hid the money and credit cards alongside and teetered off along the back of the village (we call these tofts ooop North) and past the Branodumum Saxon Shore roman fort to Brancaster Staithe’s tofts, and all this with apparently, a large wilderness of marsh to the North, an no sea to be seen.
The day ended, wetly, at the White Horse at Brancaster Staithe (more of this later) and a bar meal at the Jolly Sailors (even more of this) with shopping at the little shopping centre down the road. 13 miles and 500 feet of ascent (all those snooty contours) 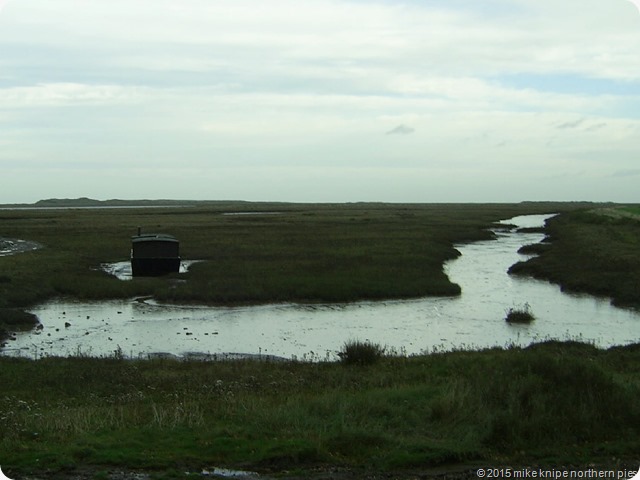 In the morning, this time energised with a smoked haddock eggs benedict with spinach and rather a lot of toast – I meantersay, who eats a full English every day?) I blasted along the sea wall to Burnham Overy. This really is easy and quick walking, there being absolutely no ascent at all, and all the time, on the left, is the huge and beautiful marshy wilderness ringing to the calls of all those Teesdale/Pennine birds that left the hills at the end of the summer. I love to hear a curlew and a plover. They remind me of the warm and scented Pennines of the high summer. You can’t really doze in the grass on the Norfolk coast path in November, though unless you want a really wet bum and you enjoy shivering in the nithering drift seeping in from somewhere near Birmingham.
So, we hurry on at a bit more than 3 mph. This is enjoyable, though, and soon we (that is to say, me since I had no pooch (sniff!) ) passed through Burnham Overy Staithe, too early for the pub, and back onto sea wall for a bit more hurtling. 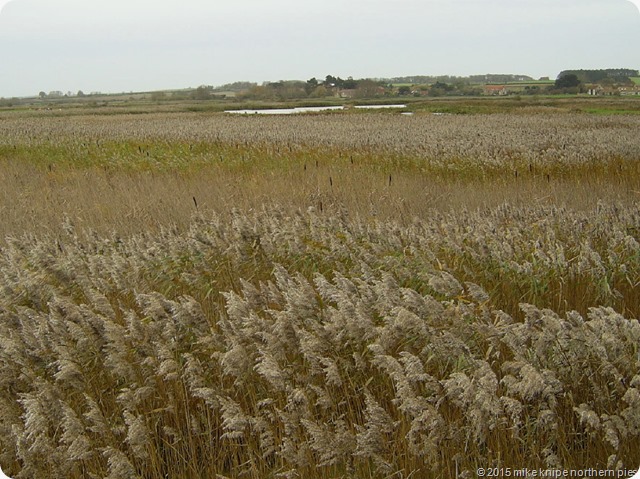 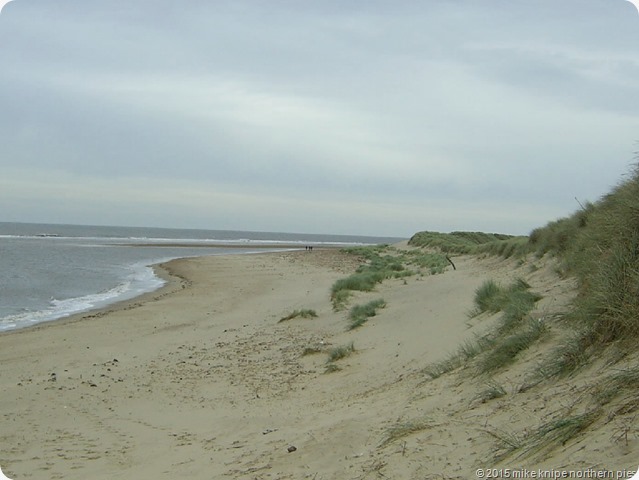 After a bit, I’m on another beautiful and biiiiig beach. And it’s empty too. I plod East. There is some difficulty with the soft sand, but I find a corridor of hard stuff and stay on that.
At lunch, in the shelter of some trees, and at the more popular Holkham Gap end of the strand, I get my face and ears licked by an enthusiastically friendly terrier, and am presented with two dog-slobbered pine cones by two collie-crosses who seem to be siblings, one of which is a spectacular black-and-white brindle and the other brown and white. Beautiful dogs. I’d have those doggies. I’m missing mine a bit, although he would have objected to that encounter. 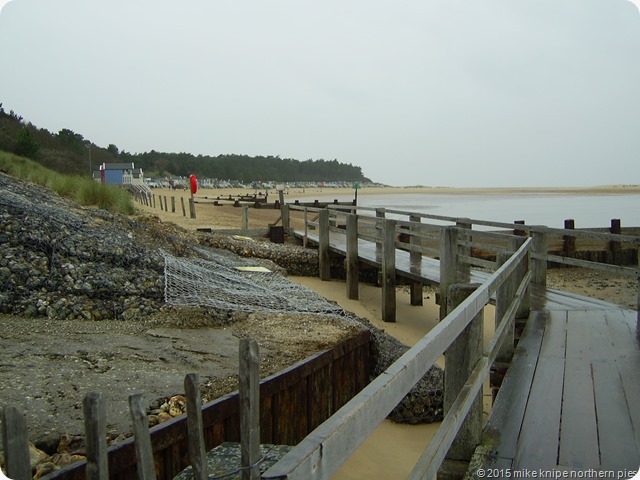 I press Eastwards through the woods where, it starts raining again. As I arrive at the car park/jetties/seaside bit just outside Wells-Next-The-Sea, its chucking it down, but its only half past one. I think I can knock a bit off tomorrow’s long day and press on. So I press on. Wetly. 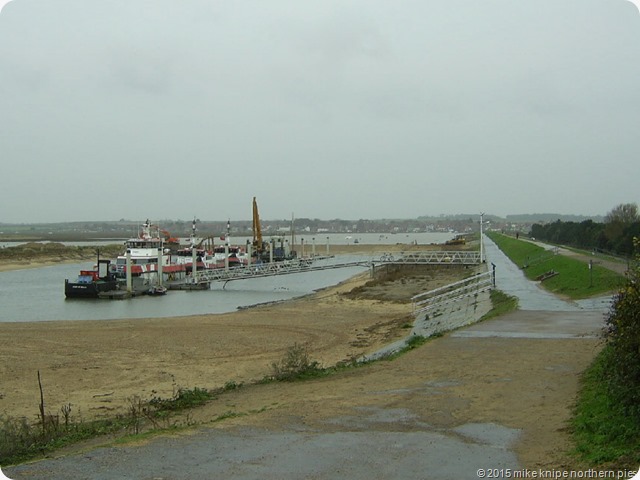 After Wells, where I resist the Fish and Chips, the path is slippery when wet and the marshy wilderness re-appears on the left. The curlews are back. There’s nobody else about and I end at Stiffkey where I seem to have just missed the bus and am deciding to have a coffee in the Stiffkey Stores, when the bus turns up. The driver apologises for being late, although, it’s saved me a wet wait and I travel back into Wells, having bagged another 3 miles. The (very useful) Coasthopper bus goes right past the Arch House B&B, which is where Penny has arranged for me to stay. (yet another plush room) So it’s all good. I spent the evening with the telly and a bottle of plonk. Happy days.
Later I have Fish and Chips by the quay from French’s chippy. Nom nom. Even happier days, specially as it had now stopped raining.
I did 15 miles and 400 feet of up on very easy going. (Not sure how all the “up” happened, actually.)
Part two will contain the next 20 miles of this in a couple of days.
Here’s a website about the Norfolk Coastal Path norfolk coast path  (click it, don’t just look at it!)
And for even more information, click this link: visit north norfolk

Nice walk.
Did you spot the nudism sign on Hokham beach.
God knows why anyone would want to prance about in virtual trousers there.

A nice little walkie :-)
Mad as a March Hare: just the sort of marketing / PR company I was looking for when I had the business.... A bit late now :-(
Enjoy the trip, I'm enjoying the read!

Didn't notice the nudie signs at Holkham, Andrew - I was probably too near the actual sea. Not surprised, though - its just the sort of place for that sorta thing.
Ta JJ - never too late for a mad march hare though....

What are you doing following me around, ha ha. I recognize all of that.

Tar, Dawn - I did notice a bunkhouse and some campsites too...
Lorna - Was that you in front all the time? (arf!!)

The rector of Stiffkey was a famous man in his time and was eaten by a lion.

We did that walk in July during the hottest week of the year. Its a superb area of the country and well worth a visit.

Fun reading this, and reminds me of our two goes at the NCP (the previous two Easters). Just nice over three-and-a-half days. We do fancy giving it another gos sometime - perhpas not at Easter! - perhaps the other way. Or maybe we'll do an adjoining path. Either way, I think we will be reacquainted with the NCP again in the not-too-distant future.

Eaten by a lion, Tootlepedal? Well, if you're going to go and meet your maker (and we all are, aren't we?) - best do it in a way7 they'll never forget at Pearly Gates Reception and Customer Care Centre.
Gavin - It'd be good in summer... nice to paddle and there'd be more tea rooms and ice cream..
Julian - You know it makes sense - but I'd go West to East with the wind behind me. Three and a half days is just about right, I think.

Just googled the rector of Stiffkey - eaten by a lion in Blackpool after being defrocked as a priest after appearing in a photo with a scantily dressed teenage girl.
You couldn't make it up, could you...?

Having lived quite close by I think I've done all the Norfolk Coast Path over a twenty year period of holidays there. Well certainly the bits either side of the pubs. It's tricky remembering now.

You find yourself bumping into all manner of celebs, clothed and otherwise, along there. All rather BBC2. Though I believe the naturist beach at Holkham has now been closed. Someone will be along in a minute with an update on that, I expect.

Did you have samphire with your chips?

Hello Alan.... I don't think I met any celebs and everybody was fully dressed, although it was a bit draughty to be fair. Apparently, naturists have been "unbanned" from Holkham beach. But they're not allowed in the dunes, just on the beach where everybody can make sure they're not up to anything the Rector of Stiffkey wouldn't approve of.

All the girls in Blackpool are scantily clad, whatever time of the year. Or is that Newcastle?