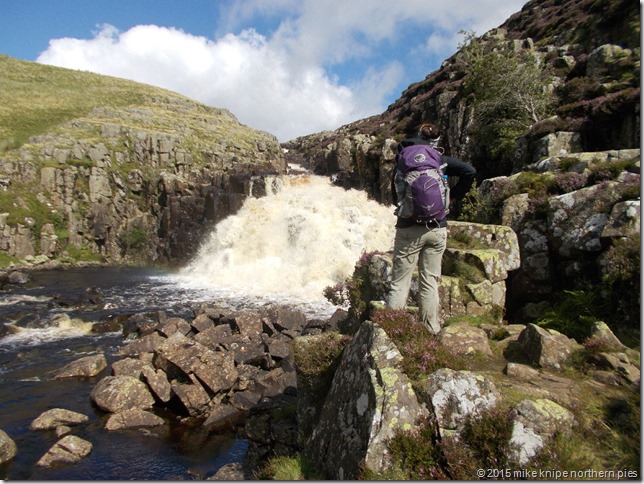 I seem to have some kind of mental block about Cronkley Spout…er Cautley Snout…. I just can’t remember from one minute to the next what it’s called. 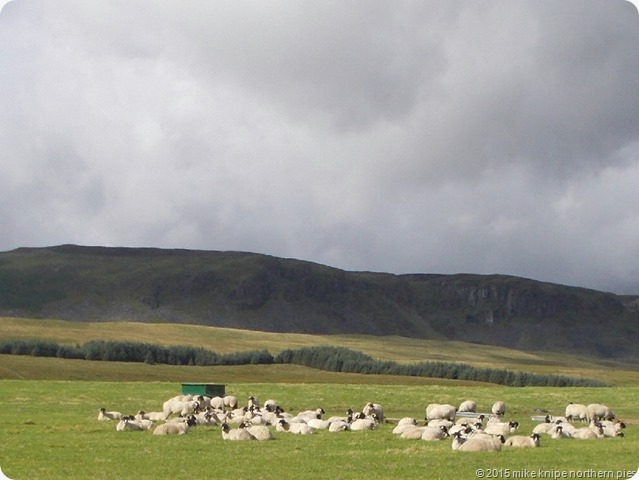 Anyway, I did the reccy dogless about a week ago in warmish weather and it all went swimmingly well. The reason I didn;t take the dog was the high cattle population on this walk. There’s Galloways on the Pennine Way near Widdybank farm, and sucklers and beef bullock stirks around Harwood and the dog, who likes to bark at and attack anything large he thinks might threaten him, is a definite liability – and just as well I didn’t take him, too, because we did have a little trouble from one mature moo-cow mum. 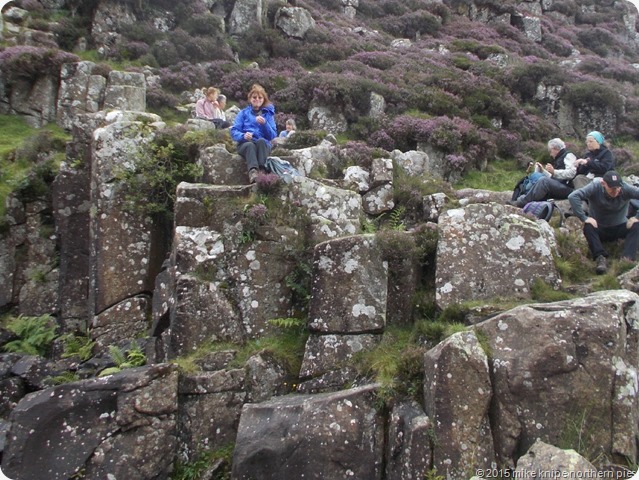 On the day (yesterday), 12 people turned up at Hanging Shaw, including steward Compulsory Dave and his assistant Ruth plus Diane’s small dog Bailey. Bailey may well have been the root of the cow barney, or , then again, possibly not as she’s very small and not very dog-like in shape to a cow, I would have thought. 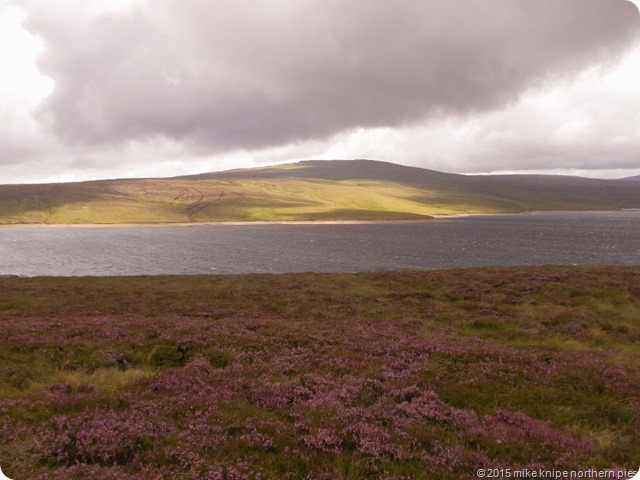 We progressed up the Pennine Way incident-free through the Galloways and up and over the scrambly scree to Corbyn’s Shout, or whatever it’s called, where we had lunch. The fine spray blowing off the waterfall got a bit heavier as lunch ended and turned out to be a drizzly, blowy shower – one of several to dampen the afternoon.

We all scrambled up the Sprout easily and marched off up the road to Cow Green where we plunged headlong over the rough moor to Harwood. 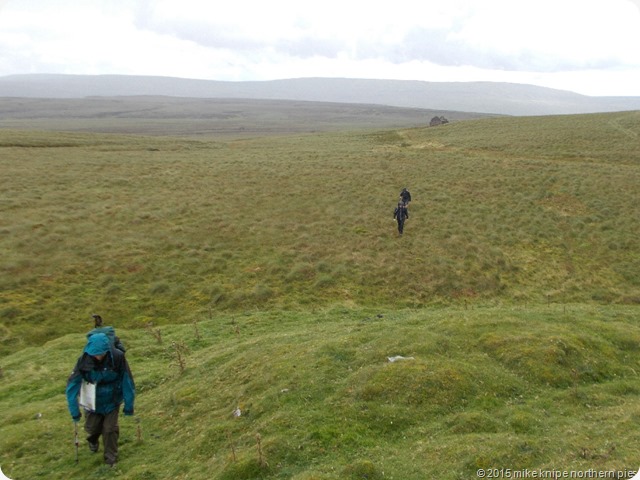 I was quite pleased that one group of bovines had been removed from a field and another had been replaced by beefy stirks, who appeared to be a bit lethargic but were easily sent on their way down the field. 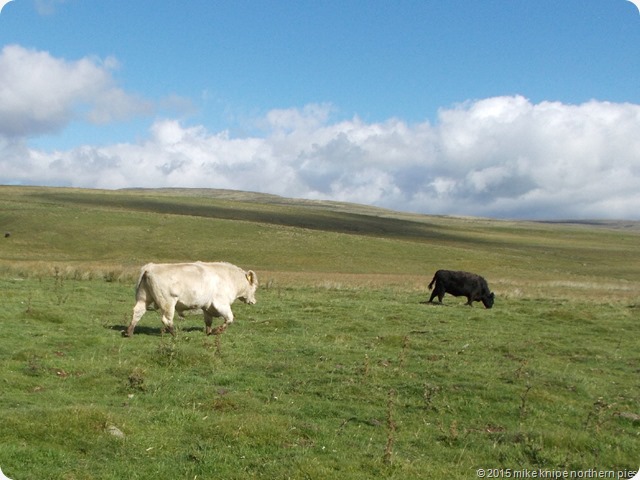 The next large field running  down to Harwood beck still had it’s big hers of sucklers and we took a wide diversion around them, causing no apparent excitement till we got to the stile at the end, where a manic mum came hurtling and dancing down the field to join us. The dog was shuffled quickly over the wall and several group members made aggressive cow-herding noises which seemed to put the cow off it’s stride a bit. Soon we were all safely over the stile and without injury to pride or body. Had we been spotted by this lunatic whilst in the middle of the field, though, we may have been in trouble. It does seem, as one of the walkers observed, that cows are much more aggressive than they were when I was a sprog.. they probably don’t get handled as much as they used to, I suppose. 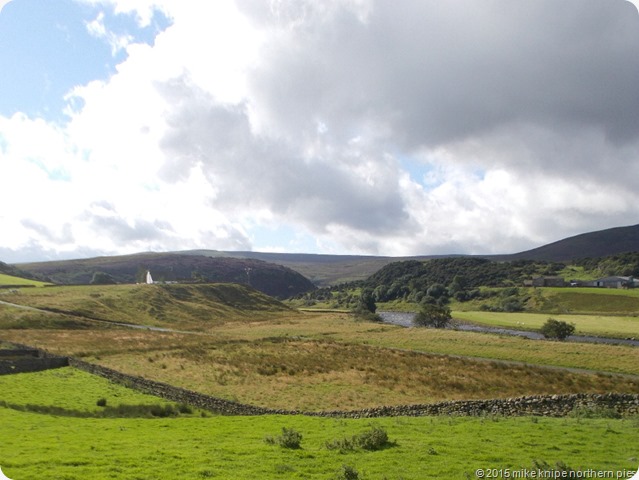 The walk ended with a walk along the riverbank, a passage through the Bob Pendlebury Memorial stile and further wettings from above. Bob Pendlebury, who died in 2012 was a County Councillor from Crook who was a significant advocate for the North Pennines AONB and  access to the countryside in general and a stile in his memory is now on Alf Wainwright’s Pennine Journey at Forest-in-Teesdale

The walk was about 12 miles. 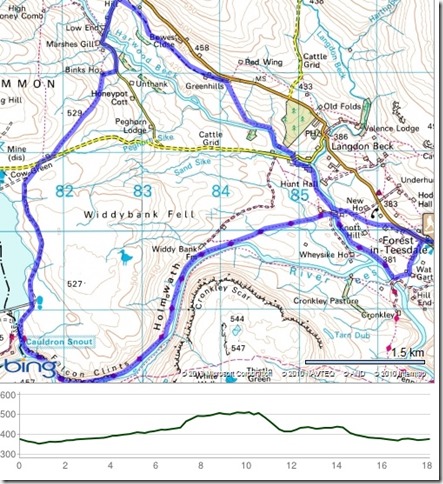 I love sprouts but we only ever have them at Christmas :(

A cracking walk that Mike. A bit alarming, having manic cows leaping around.