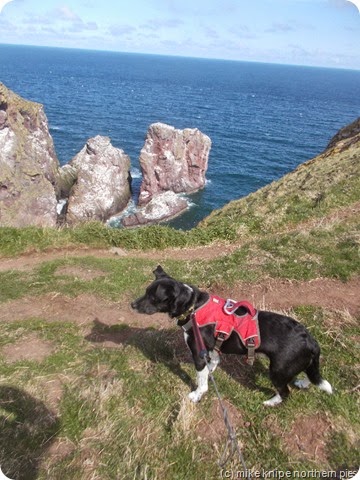 On returning from visiting the new Grand-child at Dunbar, Lucky suggested that we could visit St Abb’s Head, which has a whole bunch of Tumps – the only climbable ones being Kirk Hill and St Abbs Head – the others being wave-washed sea stacks covered in seagull poo and lots and lots of squawking birds, all of which mitigates against any kind of attempt to get to the top. 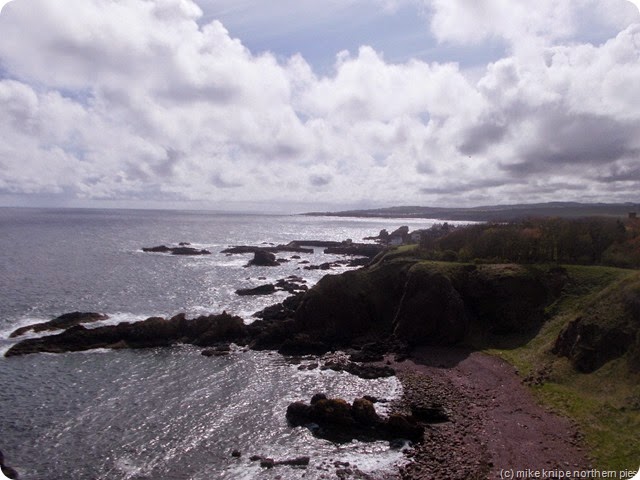 Our ramble began at the visitor centre car park (two quid for parking) and wanders down the lane for a bit before hurtling off towards beetling cliffs with huge drops into the crashing waves far, far below. The rock scenery is superb and there are subsidiary grassy lumps to be climbed at will – each one giving a different but dramatic view of the coast and , of course, the surf smashing against the spiky rocks. 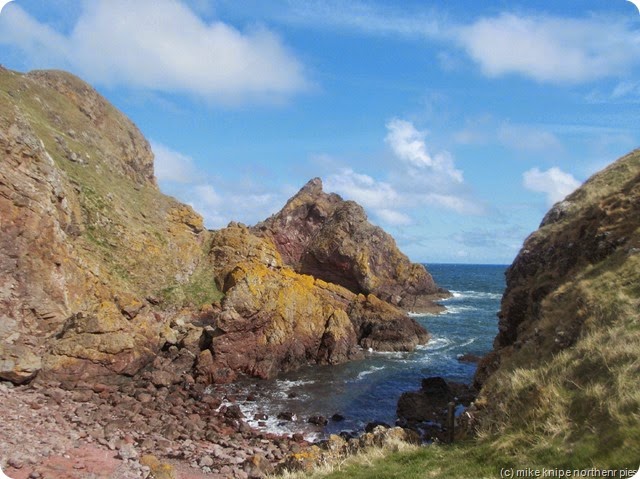 After a few ins and outs, we left the main path to climb Kirk Hill. This was the site of the seventh century  St Aebbe’s Nunnery-cum-monastery and was short-lived, having burned down shortly after St Aebbe’s death. There’s not much left, apart from some indistinct earthworks, but it’s a cracking place for any kind of institution, and this one seems to have occasionally played an important role in the politics of the aristocracy of Northumbria. Bamburgh Castle is only 25 miles or so down the coast and was visible when we visited. And it was here that St Cuthbert, being spied on from above, spent some considerable time immersed in the sea whilst praying (to ward off any licentious feelings he might have) (I can confirm that this strategy works by the way) was seen to be accompanied by two otters as he emerged from the briny. This is recorded as a miracle and regarded as evidence of Cuddy’s empathy with wild animals and birds. He could have just kept a few pets, innit? 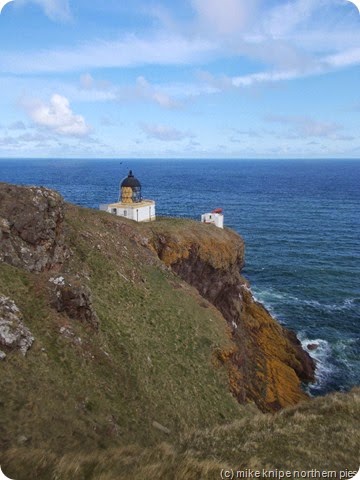 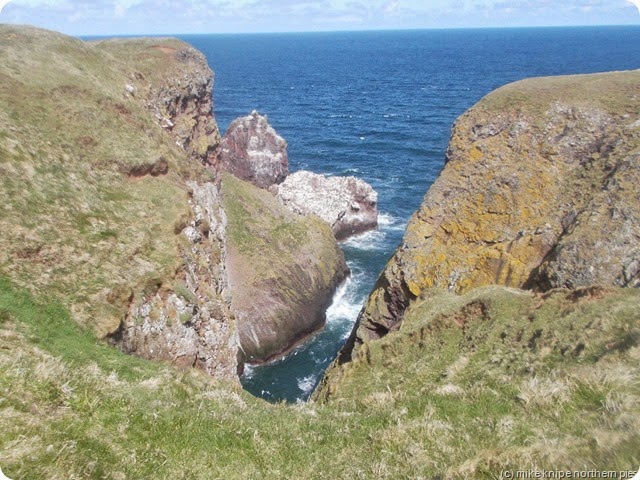 After a steep drop, we rejoined the main path and climbed up to the lighthouse and the summit of St Abb’s Head. The summit furniture is a view indicator, indicating places such as Denmark and Aberdeen…

Just in case any of the local subsidiary lumps and bumps are ever promoted to Tump status, we visited them all. The rock scenery is even more impressive hereabouts, specially a huge gash in the hillside, occupied by thousands of birds teetering on rocky edges. Lucky they’ve got wings, really, or it..er….. could er.. be a bit ..er…..risky…  koff. 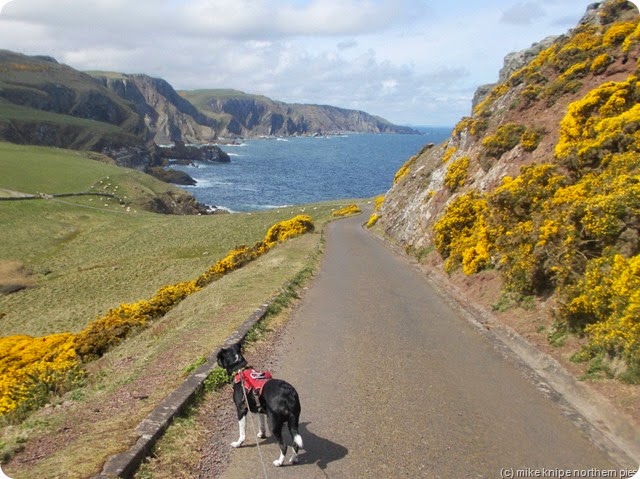 Anyway, we returned to the start on a quiet bit of tarmac.

The whole thing was just under four miles. 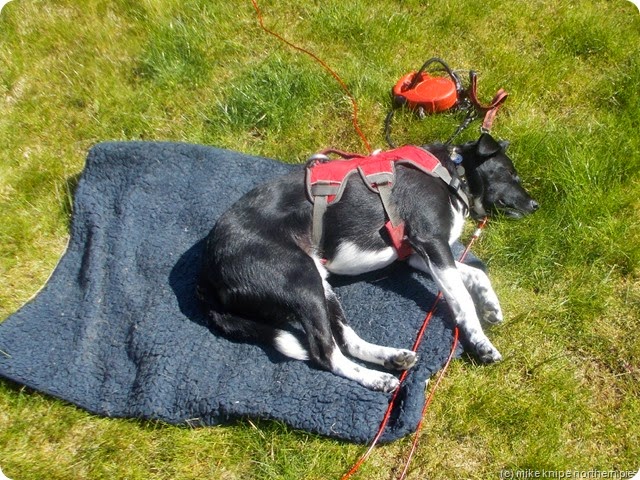 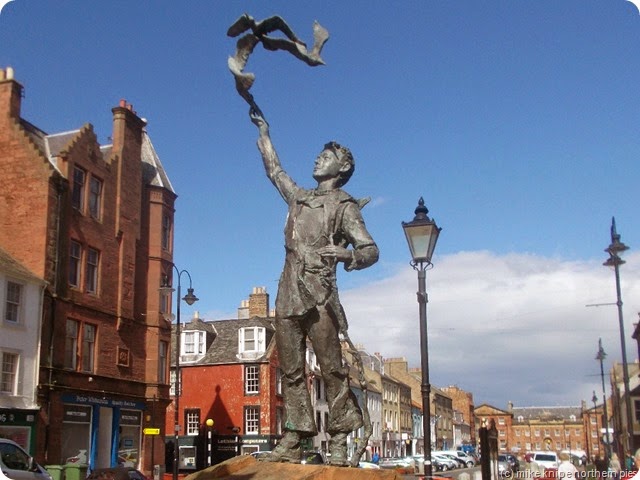 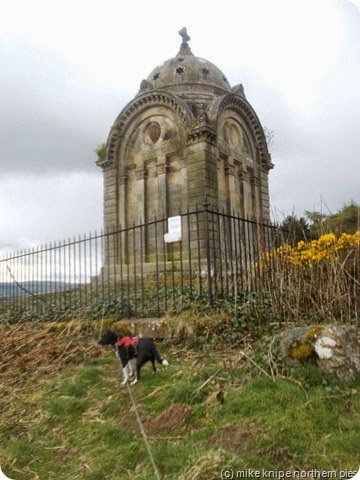 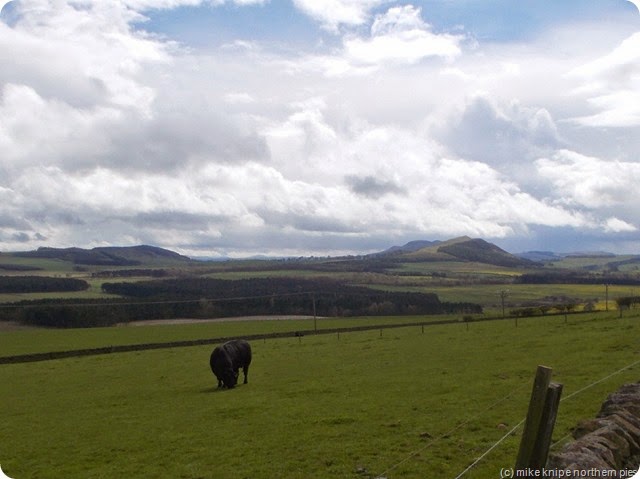 And , apart from visiting the new sproglet, me and Lucky also bagged Edgerston Rigg near the border at Carter Bar, Gersit Law just by Ancrum Moor and sporting a fine mausoleum, Fans Hill West Top (just a few yards from the gate) and Stoneshiel Hill – another roadside easy bag – apart from the barbed wire fence…  plus, plus, mind you, Dunbar beach, High Street (John Muir statue) and the garden centre next to Asda.

Here’s a map of the St Abb’s walk. Just goes to show that even very short walks can be more than rewarding. if you do this one, take your time and keep your kids and dogs on a lead in case they fall off something. 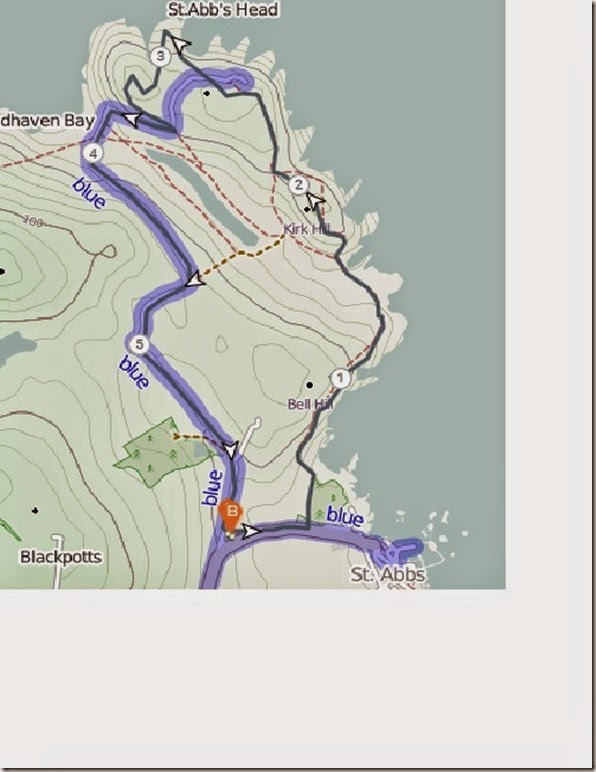 His Lordship and I are quite adept at finding decent wanders wherever we happen to be, whatever the terrain. Looked like a great little outing.

And I think Lucky is looking more handsome every time I see a photo of him.