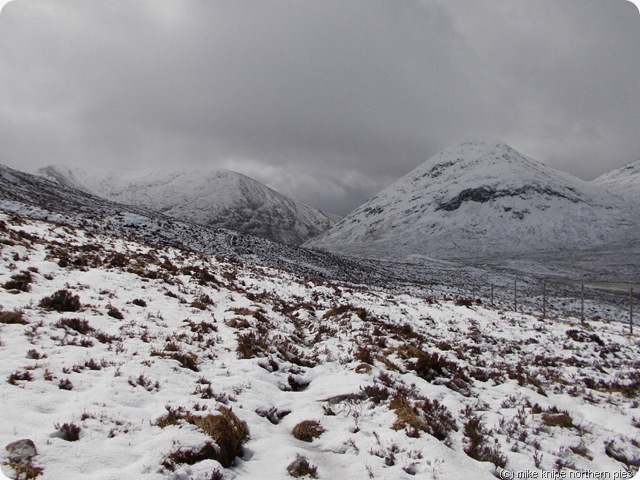 After a fitful night during which I only managed 14 hours sleep, I set off really early at about ten o’clock. The weather forecast had driven me away from the idea of a crossing of the River Loyne, so I battered down the road towards Tomdoun, meeting and seeing nobody till almost at Tomdoun when a venerable collie dog came galloping up from several hundred metres down the road. The wriggled a greeting just like wot collies do and the lass with it told me where to get a phone signal. 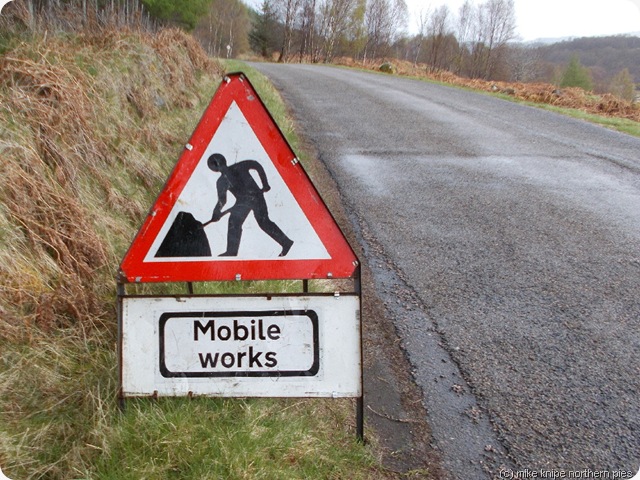 She needn’t have bothered as there was a sign put up by the Authorities, although the English is a bit ropey here.  It was a lie anyway, there was no signal. I plodded onwards and Eastwards. 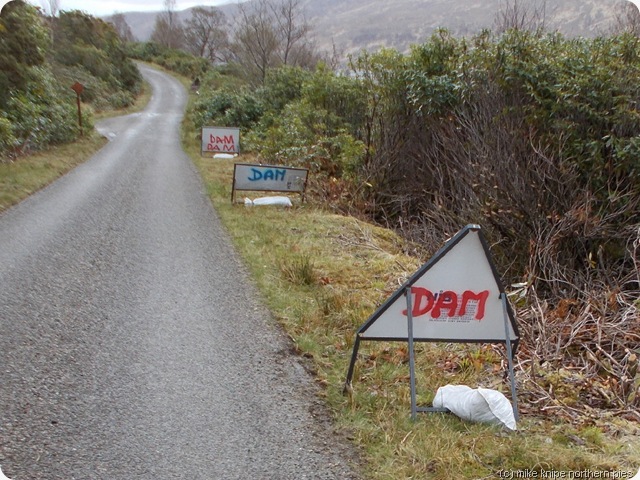 The spelling here lacks the final “N” and the writer of sign three was obviously in the same mood as me. Dammit.  Onwards. More jelly babies….

I sat under the verandah of the deserted Tomdoun hotel and sheltered from the monsoon (Did I not mention the rain?) I rang John Manning. He couldn’t hear me. I could hear him, though. Eventually, a bit further East, I reported in. 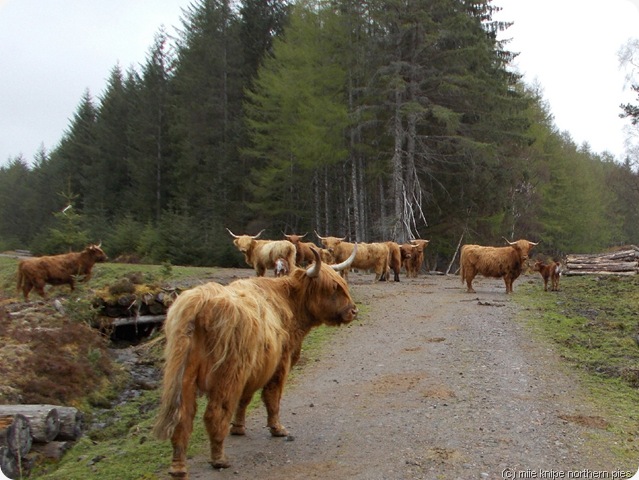 I passed through Greenfield and into the forest and met these girls just before setting about searching for a camping spot by the Allt Ladaidh. I eventually found a bumpy bit with a small beck, stuck up the akto and settled in for a mp3 fest and some cheering scotch. 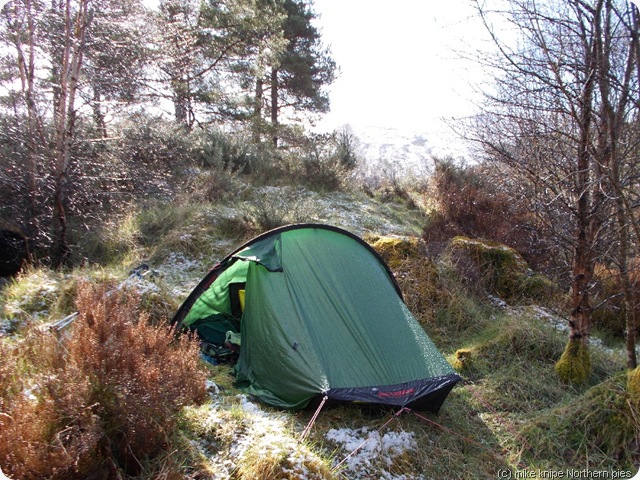 Despite thinking that I could hear Kylie calling for me in the lonely night, I quickly fell into a deep and dreamy sleep at a  time when most six year-olds are still having their tea. Despite this, though, tonight, I only managed thirteen hours sleep and awoke to a dusting of wet snow.  Target for today was Gairlochy, a horribly long distance to the South-East. I found some really good camping spots a mile or so  South, but I was soon in squidgy forest and then on a snow-clad trackless and peat-hagged moor being blasted by some rather violent and unpleasant snowy squalls. 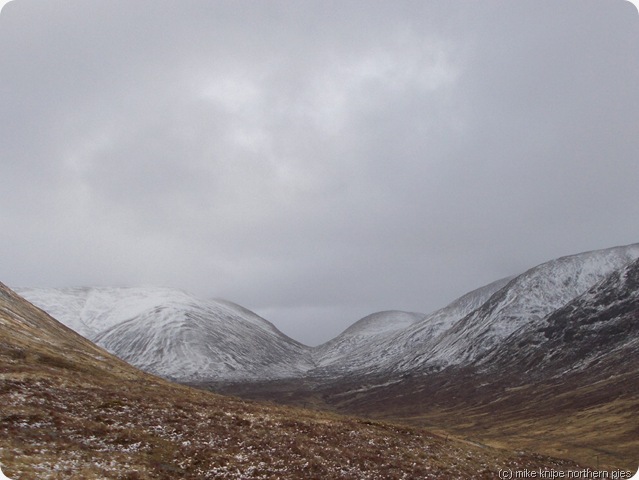 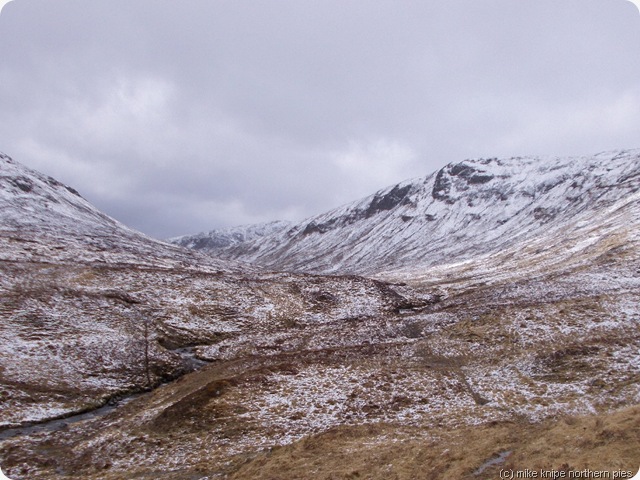 Onwards and Southwards progress was blocked by a new hydro-power station project and so, I had to turn a bit Westwards, and not on the route that had been suggested by our vetters, but on “Dawn’s Alternative” – a much better route to Loch Arkaig and one which had been used recently by the Highland motor-biker peeps who, it seems, had thoughtfully taken a route parallel to the tight of way, thus not churning it up. Maybe they were lost, I dunno. Things got better. 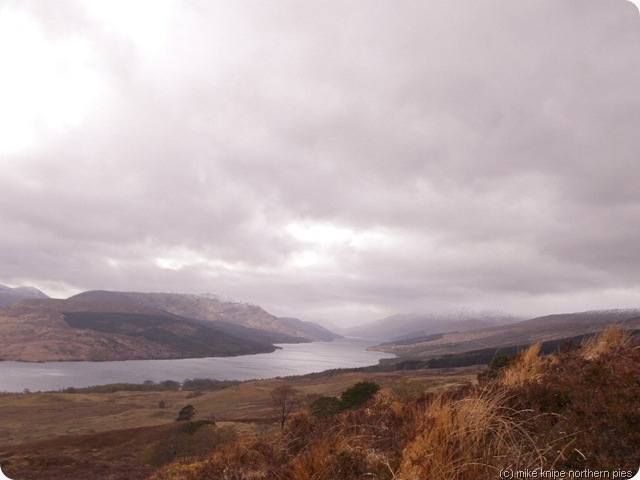 I descended to Loch Arkaig by the Allt Dubh and turned left, just after meeting a Lejogger going the other way and enquiring about camping spots. (I’d just passed quite a nice one as it happens) 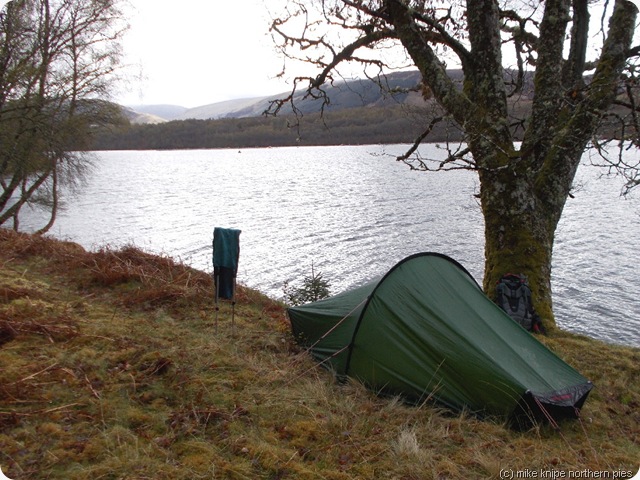 I was soon on the Great Glen Way and running out of steam and the temptation of a nice, flat spot beside Loch Lochy, just before the “No Camping” sign was too much. I threw up the akto (never eat an akto) , had me tea and settled in for another sleepathon. Does it ever go dark in Scotland? Was that Kylie floating past scoffing a cornetto? Will I ever get to a pub? 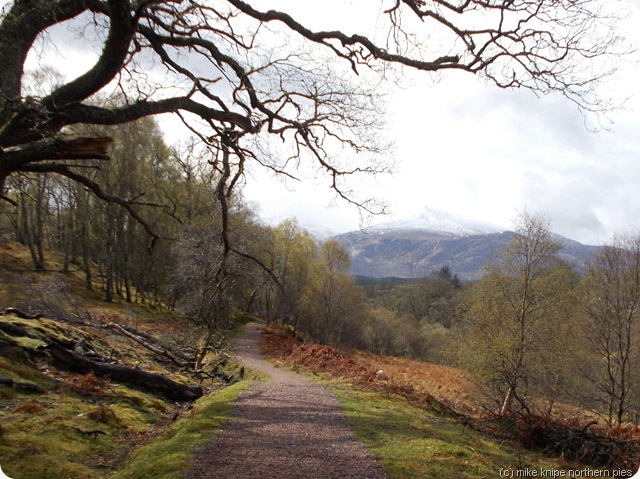 Another showery morning followed. I was up in time to meet today’s clutch of Great Glen way-ers heading North. My pack was bigger than theirs. The Grey Corries and the Ben were pristine white with fresh snow. I took the general wade road to Spean bridge. This joins a new path from Spean Bridge to the Commando memorial and is easy to walk on and to follow. Part of the path follows the old railway line from Fort William to Fort Augustus.  Sometimes it was sunny….. 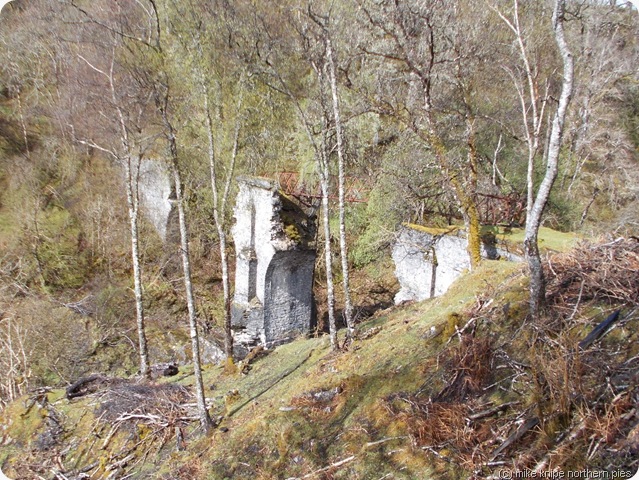 The path passes this derelict bridge (don;t try to cross this one, folks) This was built by General Wade and was the site of an embarrassing debacle at the start of the ‘45, whereby a few highlanders, by leaping about and blowing bagpipes, managed to obtain the route and surrender of 80 troops of the Royal Scots on their way to reinforce Fort William. Those devils in skirts. Lady Rough-Diamond is not mentioned…

I got to Spean bridge where the sign for the restaurant at the station said “open”. At the station approach another sign said “open at 5:00 pm”, whereas on the station itself it said 2open at 6:00 pm” This is a mastery of communications and should be commended. I met Di Gerrard on the station . She was waiting for a train. Its quite a good place to wait for trains. She’d withdrawn due to a leg injury. 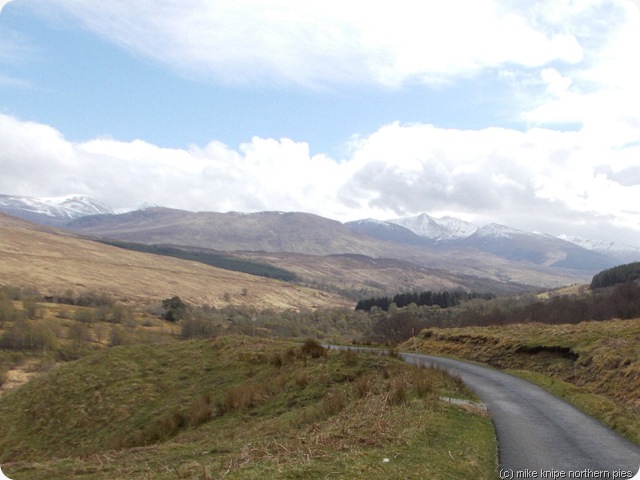 I plodded on to Roy Bridge where the pub was closed but the tea room was open. An image of my mum in a little fuzzy circle at the top left hand side of my brain-screen and, in a voice with a lot of added echo said “Never Pass a Tea Room, Son. Never Pass a Tea Room…room…room…ooomm” “Have you got clean pants on by the way…..?  you might get knocked down if you haven’t…” I went in for tea and toasted teacakes.

Later, further up Glen Roy, a car trundled to a halt behind me and an image of Alastair Pooker appeared at the driver’s window and in a voice with little or no added echo said “Hello Mike”

Alastair was on his way to Mr Sloman’s Cheese and wine party which, due to snow and ice at the oruiginal venue , had been reconvened at the Luib-chonnel bothy. Alastair drove off but I met him again later at Brae Roy Lodge, packing his stuff (mainly booze, apparently) and we walked a few yards till he decided he’d forgotten something and went back. 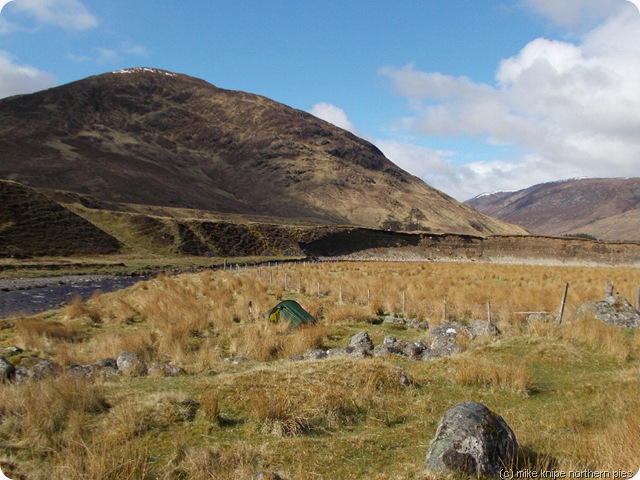 Having covered 19 miles today, I’d had enough at Falls of Roy, despite feeling that maybe another three or four miles to the bothy would be worth it for the fun. But the legs and feet said “No”. So I put up the akto, watched Alastair cruise past and followed my usual routine of brew-sleep-scotch-dinner-brew-scotch-snooze-chocolate-scotch-sleep-sleep-sleep- wossat?- sleep zzzzzzz

I did try to gently warn you about Kylie - she has eyes for another you know.

If I had seen those cooos I would have headed all the way back to Inverie and asked Bruce Watts to take me home.

Much Better.
In the last photo, is that the camp spot i gave you a grid ref for.? It looks a bit overgrown from when we were there.
Nature waits for no man i suppose.

Keep going Mike, you can do it, Kylie is just around the next corner...

Some long, hard miles there Mike.

One of those cows charged me and then got even stroppier with a challenger not far behind. It was like watching a bull fight.

BTW the reason why Kylie has not turned up to visit in the night is because she was warm and snug in my tent. She said something about crumbs in your beard.............

John - Its that moron Jason innit? Jason is a moron. he's a puff, she's a slut yeah yeah...
Fellbound - You know as much as me and less than JJ. Pretty coos...
Alan - the camping spot is close. the grid ref had a small slope failure and is now tilted. Good spots above the falls, tho..
Louise - You're just sayijg that to cheer me up..
Dawn - All hard work. But quite pretty!
James - How much did they charge? (they can detect nervousness y'know and it makes them nervous. They wuz pussycats when I passed.
On the other subject, I believe you're just covering for that Jason.
He's a moron. yeah yeah...

Looking sunnier and cheerier by the day!
I've never really got the Kylie thing though....maybe it's a guy thing........