Dawn and the Pieman Do The South Downs Part Three 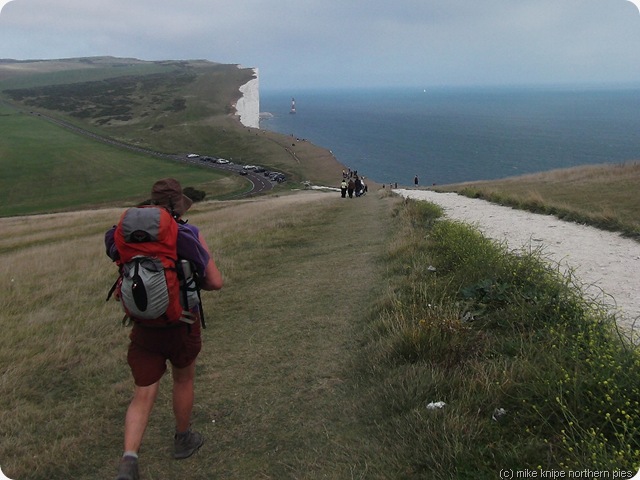 Our (relatively) high camp, of course, meant that we were up fairly high for the Sunday morning start. We bagged Firle Beacon easily and early in the day, after which the Way swings South-east to coast down into Alfriston – the first place with a choice of shops and pubs and fairly expensive tea rooms. We raided the deli for bread and beef and juice and bananas and scoffed these in a shady picnic beside the laughingly called Cuckmere River as the church bells called the faithful away from Steve Wright’s Sunday Love Songs – the Cuckmere at this point, being tidal, but not much more than a muddy festering beck.

The walk follows the river downstream before heading off into the woods of Exceat and into the Seven Sisters Country park, with it’s toilets, tap and ice-cream van (where we enjoyed a lolly). Here, it was as crowded as a seaside place gets on a summer Sunday. Everywhere there were kids and dogs and a steady stream of humanity was heading for the beach. I think maybe we were a bit out of place here…. 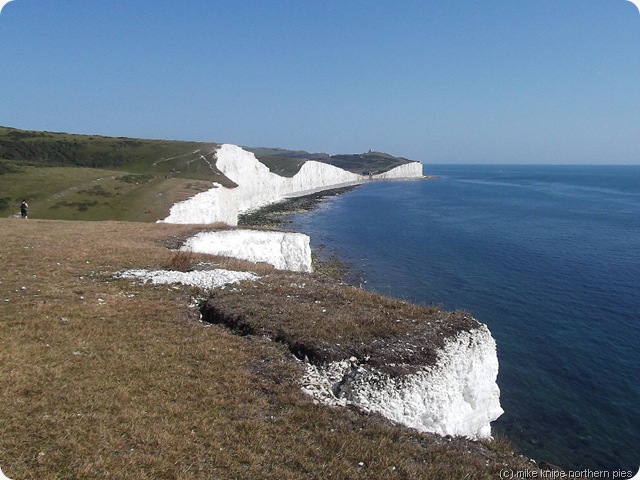 A path leads to the sea and takes the South Downs wayfarer up onto the rolling seven Sisters – with white cliffs on one side and rolling Downs on the other, this feels like a Lake District ridge – one steep climb followed by another steep descent and so on and so on for a long way – exhausting on a such a hot day. 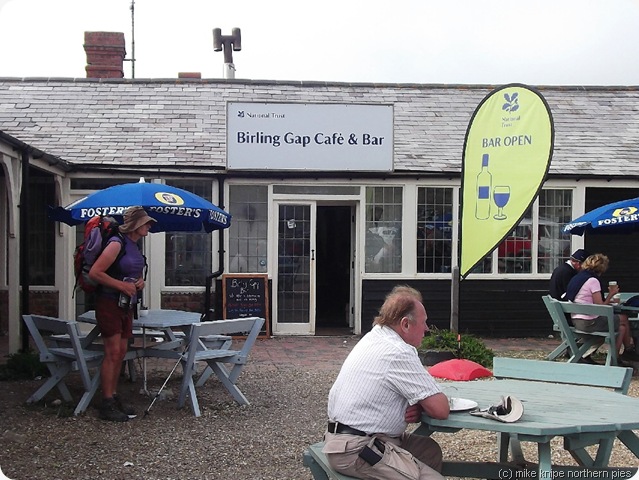 There is relief to be had at Birling Gap – relief in the form of flat but refreshing beer before the final effort over Beachy Head and down into Eastbourne. We had finished the South Downs Way but yet there was work to be done. I needed cash. We had beds booked at the YHA. Dawn’s map showed the location of the YHA. 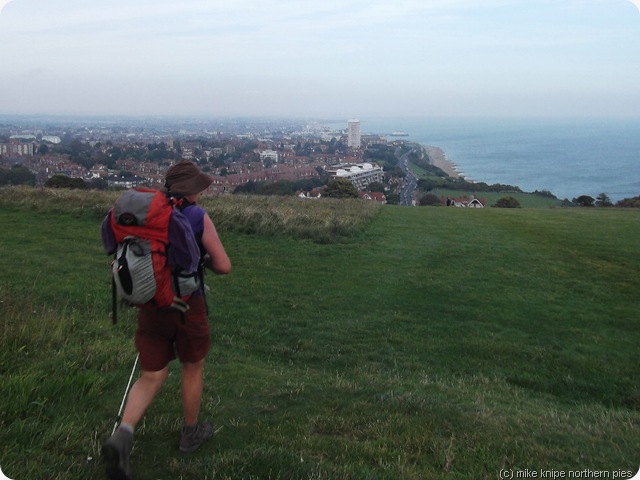 The cash machine at the co-op wasn’t working and they would only give me twenty quid cash back. Meantime, whilst I was negotiating in the Co-op, Dawn had recruited the assistance of a man with a basket of beans and raspberries to take us to the YHA. He lead us through a maze of suburban streets, remarking on the excellence of the local school cricket pitch and pontificating about the “YMCA”, which worried dawn a bit, I think and ultimately dumped us at the foot of a steep path up onto the Downs. His directions were incredible and just didn’t seem right and, what was more, didn’t match Dawn’s Harveys map. I snatched the map and navigated us at a stagger to the location of the YHA as given on the map. The YHA wasn’t there…Bugger. 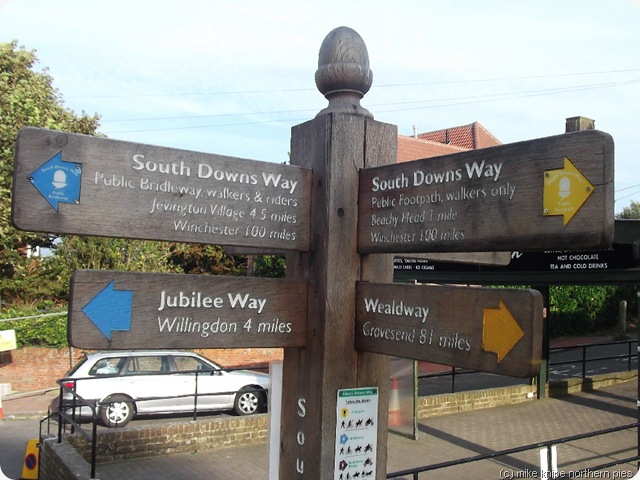 Dawn’s email booking confirmation revealed an address on the far side of the Downs. The old chap had been right. We retraced and drew our final dregs of energy on the climb up to the Downs and over the top where the YHA really was.

On the Sunday, we’d done 20 miles and 3400 feet of uphill. This is a lot with a big pack on a steaming hot day (although Beachy Head had been windy and damp and it was now raining a bit) 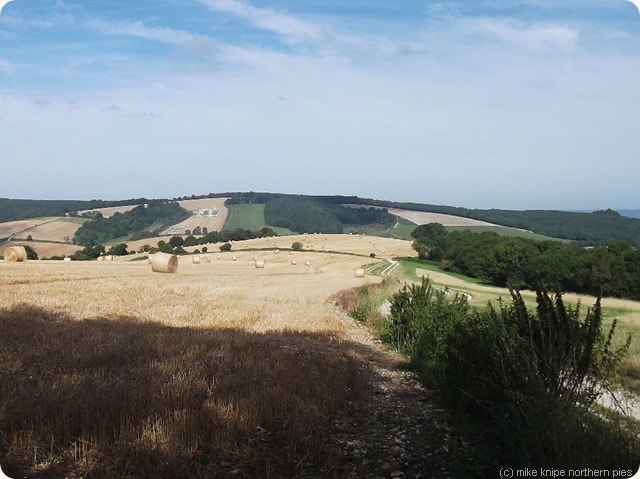 Altogether, we’d done 108 miles. I don’t think anybody just does the advertised 100 since most accommodation etc is off-route. Its a good route, though, and quite beautiful if a bit , hesitate to say it… its a bit like a Real Turmat Reindeer curry – its very nice, but it’s all the same nice till you get to the coast, which is a welcome change.  And it’s tough for campers – scarce water, hard on the feet and so on – it would be quite a good training for the TGO challenge I think.

Overall, I’m glad to have done this. Me and Dawn don’t seem to be having duff trips. The hot weather got to be a bit of a challenge by each afternoon when it started to become uncomfortable. If there’d been anything to make us fail, it would probably have been the heat.

I feel a bit smug about it now, though.

Brilliant. Well done you two. Must be nice to say the weather is to hot. I’m just thinking about turning the central heating on.

Yes, the heat was relentless at times but we did it and I am somewhat chuffed about that.

It's a fine stroll. About 40 years ago I bivvied it, no stove. Just took sarnies to start with and fruit cake. Replenished supplies at pubs.

Mind you, we had really good weather. Well done. It might well make an excellent TGO training run... Local, too!

Nice article, thanks for sharing.

Just turned the heating on ourselves today.
Looked a good walk though - did you see any horsey folk on it, seeing as it's a long distance bridleway?

I am pleased you enjoyed Chanctonbury Hill. It is a magic little place with many memories for me. I played a rock concert there in the early 80's, no seriously, the organiser hired a dirty great diesel powered generator and the audience of mainly bikers kept on chopping down small trees to feed their bonfires. Our singer came out with the great line "Chanctonbury Ring ?...it will be Chanctonbury semi-circle by the time you f***ers have finished with it".

For the first time in two and a half months, and having read Dawn's and your accounts, I'm now quite fancying a backpacking trip :-)

Hot? Heat?
Well, if you will go swanning off to equatorial zones, you get what you deserve. I hope your immunisations were up to date.

Just been catching up on your southern exposure - all 3 episodes.

Sounds like you had a great time (both of you). And more effort seems to be required than might be imagined in the "flat" south!