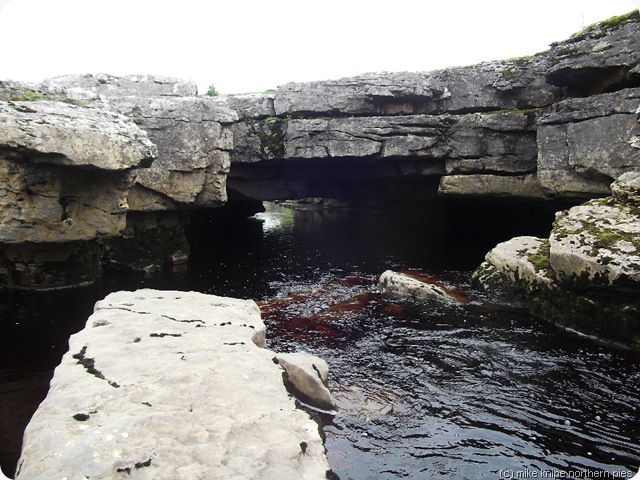 We did the Bowes Loop/Bowes Alternative on the Pennine Way today. Two people turned up, plus two stewards, Ann and Martyn, so there were five of us. There’s many an Englishman now abed that would think themselves accursed they were not here. The weather behaved – it was quite nice, really..  Was there a tennis match on or something..? 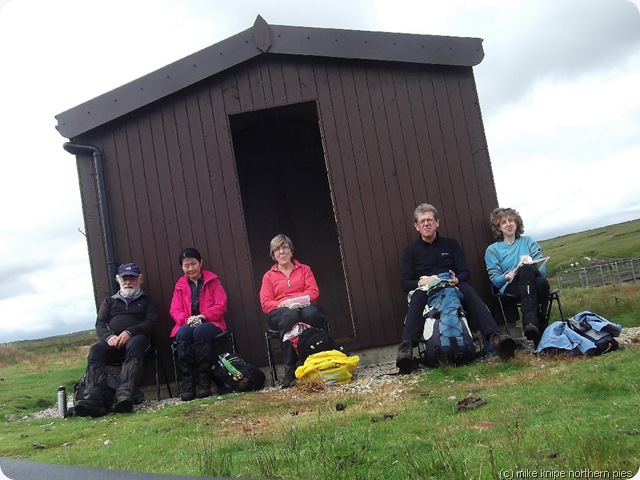 This is a picture of today’s group. As you can see, there is a certain amount of grim determination about them, despite the fact that a time/space continuum accident  is starting to happen where the entire world slips several feet to the left. Either that or the camera slipped during the operation of the self-timer. Note the chairs. This is standard equipment on a Durham County Council Guided Walk. Walkers are encouraged to bring their own although most stewards carry a few spares. Cushions are not provided. We’re ‘ard oop North, so we are. 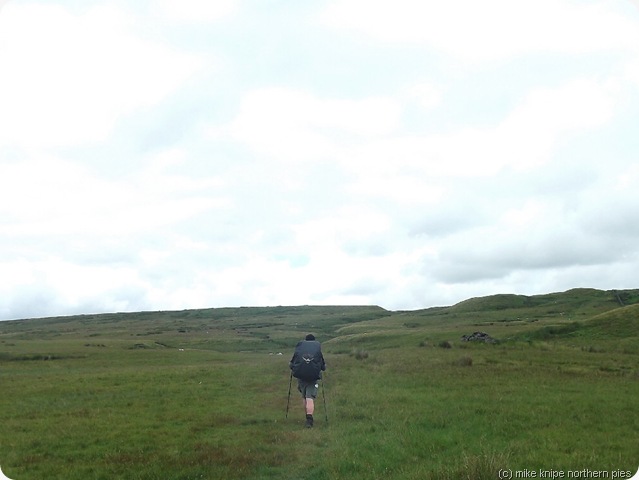 This is Russell, a Pennine Wayfarer on his ninth damp day on the PW. Russell works at the landrover factory near Birmingham. He was christened Russell because his mother was frightened by a bag of crisps.  Personally, I thought this explanation was far-fetched. Russell is walking up the Pennine Way and then back down the Northumbrian coast to do Hadrian’s Wall. Russell walked with us for a couple of miles. I noticed that the stewards failed to get any money out of him so he owes Durham County Council sixty pence. These walks aren’t free, y’know… 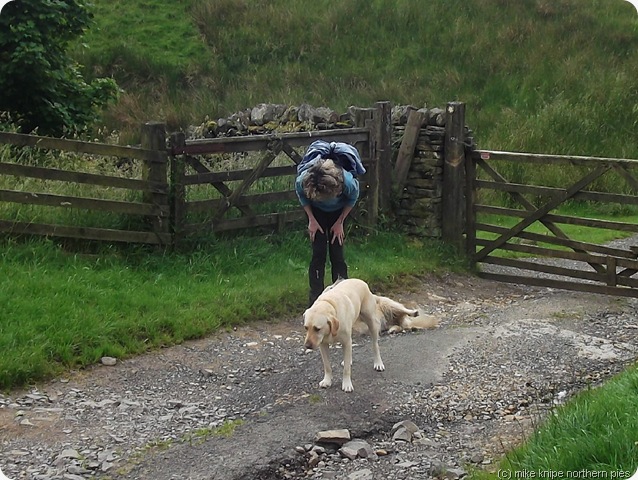 These are the dogs from Clove Lodge. The one stood up was noisy but turned out to be friendly. The other (submitting) was just friendly. The owner of Clove Lodge owes Durham County Council thirty pence for socialising fees for the dogs. 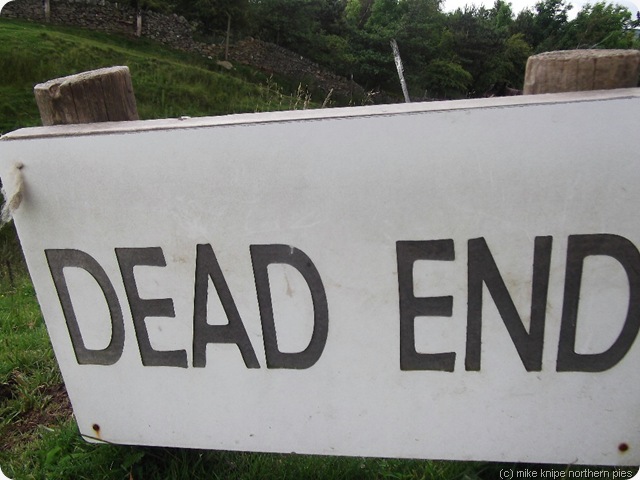 This is what you get on a nithering cold day in the North Pennines if your underwear is insufficient. Merino wool is the thing, boys…

This advice doesn’t apply to girls. 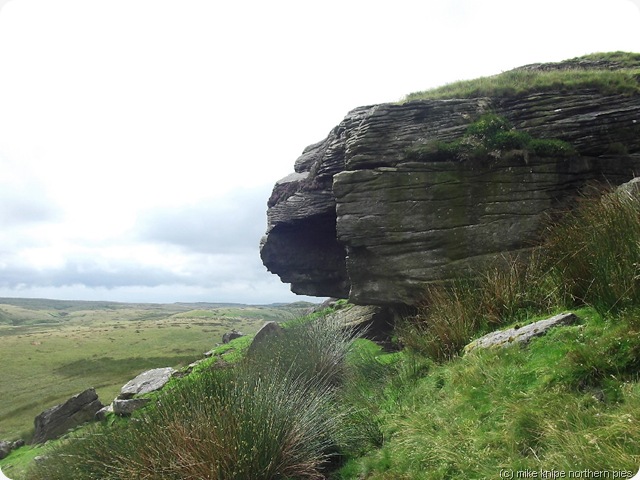 This is a picture of a rock buttress on Goldsborough. We had our afternoon break on the top of such a buttress. Probably not this one, though. 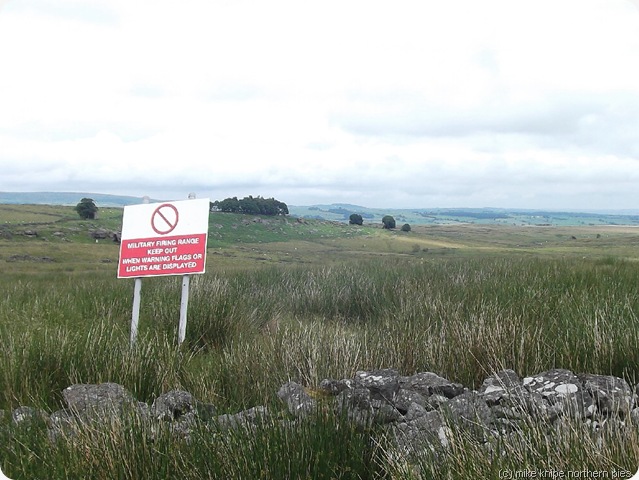 This is a pic of the safe end of Battle Hill firing ranges. They shoot proper guns in here. Don’t go in. 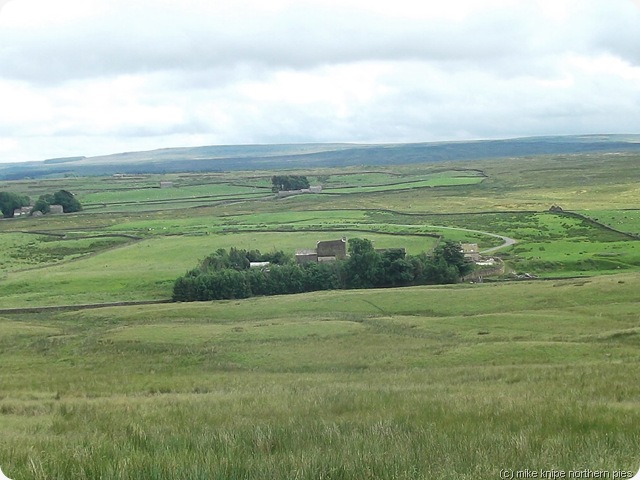 As you can see, another time/space continuum accident is starting. The picture is Levy Pool (or Laverpool). Its a bit lonely. It would be an excellent place to be a cat, I would have thought. The Bowes Loop passes the buildings which have been restored in a specially excellent way and some of the houses are thatched with ling and have very steep roofs. This is very typical of the older farmsteads in Weardale in particular, although these all have slated roofs nowadays. Alf Wainwright’s description of the place says that the windows were “sightless” and the place derelict. Its not derelict now, it’s rather beautiful.

What underwear should I be wearing then Mike?

Why on earth would you have to pay to walk?

Now I just need to work out a way to do that, still have enough money and to tell Olly and harriet and Lucy that I am fed up with work.

So back to work next week then :(

Chrissie - Huh? Whilst I'm no expert on lady's skeggies, I would say something warm and substantial would be just the thing.
Parsimony - Are you under a bridge by any chance?
Andrew - Its all down to forward planning and being parsimonious (see above). In short, its your own fault. Get back to work.