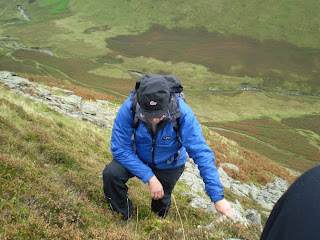 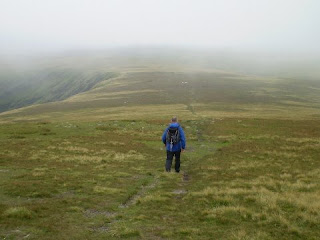 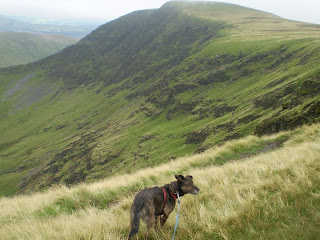 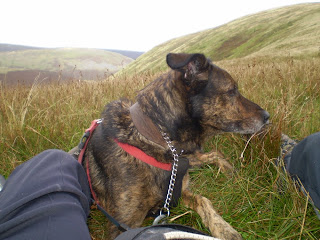 This was very much a last-minute "where shall we walk" type of decision. To climb "The Tongue" (She's a bitch an' she don't suffer fools gladly). So me and my pal Alan - who shares the distinction of having worse heart disease than I do (pacemaker... we are NOT worthy...) and superdawg, fresh from an unauthorised breakfast of cat biscuits he accidentally knocked over this morning... sorry, where was I? Oh yes, so the three or four of us, whatever it was, set out from Mungrisdale City Centre car park (please put £2 through the door of the funhouse, ta!) and soon afterwards were tackling Lawson's Couloir on the towering east face of The Tongue (she's a bitch etc etc blah blah...) This was a mix of steep grass, scree, some bracken and a rock.
Only a mere hour or two later and we were scoffing our turkey butties at the summit cairn (Look, Mrs Knipe bought a job lot of sliced turkey at Asda in Bishop Auckland due to the young (male) deli assistant giving her the eye. We've got tons of the stuff in the fridge. Its all right, but its just a bit too much like Boxing day.)
I hope they don't put the lad on fresh fish, thats all...

After this , we went over the lip of the Skiddaw Glacier over to the summit cairn of Bowscale Fell. And then, through incipient fog to Bannerdale Crags, which has dramatic views of crags and scary things like that.

Having licked The Tongue and failed to get the word "Gum" into this piece, despite trying very hard, we decided not to climb Blencathra on the grounds that this would just be showing off. So, instead, we went down an extremely attractive footpath to the foot of Souther Fell - famed for it's 1745 apparitions of Bonny Prince Charming's army prancing about , playing with their cannons and flaunting their muskets, to some biblious chap who had clearly just spent the afternoon in the Mill Inn, but who nevertheless reported this vision to the local press....
Its not famous for its very fine crop of sedges, which may well turn out to be a pity.
After a coffee stop, we assaulted the Northern Arete of Souther fell and descended the other side "with care".
And back to the Mill Inn for a light libation.

All cracking fun, despite the turkey overdose.

8 miles and 2100 feet of uphilliness and a 60 mile drive over the A66, which was yet more fun, specially as the price of petrol came down during the journey.
Posted by Mike Knipe at 22:13

An' tha's already updated it more than what I have done to mine in recent months. As a technophone I'm impressed mightily.

I was speakin' to Weird Darren the other day and apparently we'll soon be able to remote-blog remotely from remote valleys using digital boot laces which you can download remotely from text messages received on White Box Stoves...

or something like that. The conversation was very techknickeral and I hadn't the remotest clue what it all meant.

But I will follow your blog, where ever it will lead us.

PS: Steph won't be joining us for lovely poos on the 30th TGOC cos she's having our first bairn in March, so she'll have to take it easy and merely ferry whisky to road-heads.

I have to say your busy hill walking life makes great reading. I reckon you have many a tail to tell - past trips as well. What about a TGO Challenge write up?

Eeeeee John, congratulations on the pre-Dad stage of your life. And even more and better congratulations to Steph, who will likely have to work a bit harder at some stage. Will it be Airedale general? (My sprog #1 was born there, and now she works for barclays bank...) I expect you're quite chuffed anyway... you can enjoy "smug mode" till the second nappy (the first one is a novelty)
Ive no idea wot you're on about on the other stuff about remote blogging - Ive only just discovered the finer points of our electric kettle.... (don't try boiling eggs in one by the way...)

Quite good fun, this blogging stuff, though...

Hello Martin - I've not got a job, y'see, so I can go for walks whenever its not raining. As for a TGO challenge write-up, there's two of mine on Doodlecat.

Its the best place for them, I think...

Well Mike I shall wander over to Doodlecat and have a read of your exploits and all that. I have only done two Challenges, and one other coast to coast, not the Challenge though. Your nine, puts me to shame and all. You can read about one of mine, on my blog - I'm off to read about yours.

It might very well be Airedale thougbh I've been down there twice recently, once on the bus then once on the train and both take ages. See, I might be needing the car that day...

Barclays' eh? I bought a coupe of banks recently and got a third free.

Abd BoiLing and EGG in a kettle. That'd be Bleggings?