Pieman's 2022 TGO Challenge in a kilt and JJ's Tent 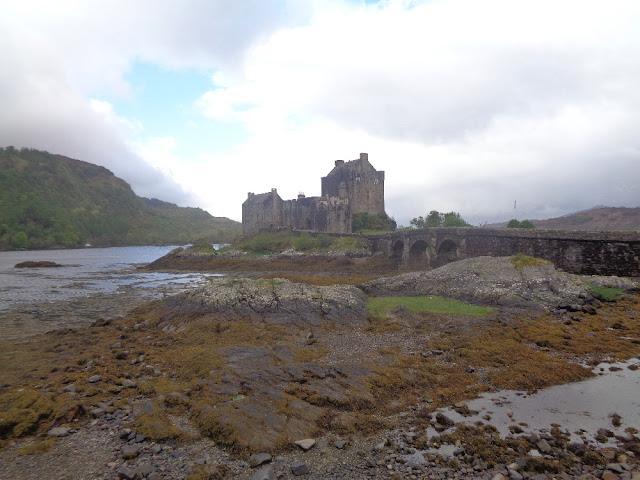 That were a right wet one. At least at the start. I met JJ on the campsite just a bit West of Dornie - specially designed in the route to add nearly a mile to the route. I got off the bus  with a stiff bum after severalteen hours of travel. It were chucking it down and blowing a hoolie.  It's an ill wind, though and, this particular ill wind snapped my tent pole just as I was brewing up. As the rain slashed down and the tent fell on my head, it occurred to me that holding it up with my parting (in the middle) to avoid a conflagration would be just the thing. I called to JJ who was deep in consultation in the tent next door. Or next flysheet, actually. He announced that he had to go home due to an unfortunate happening which it's not my brief to describe. So I borrowed his tent. We parted just by Eileen Donan Castle - he on the bus, me to take a picture of the castle. 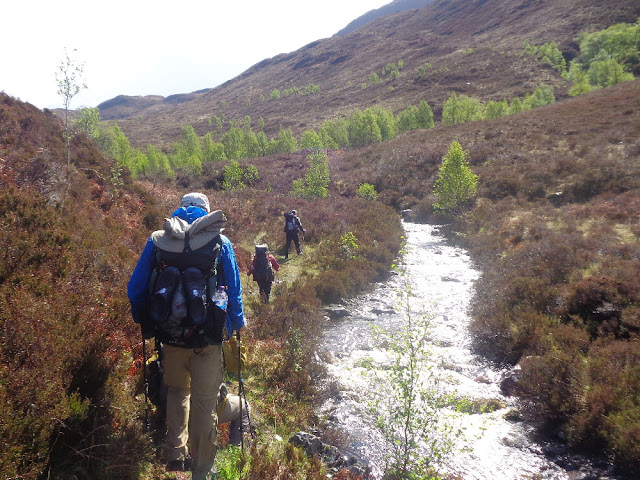 I wandered in the general direction of Denmark, which seemed like a good idea. The sun shone a bit and I met some Americans. Loads of Americans. They walked faster than me, but I took a shortcut as the rain returned. We met again later. 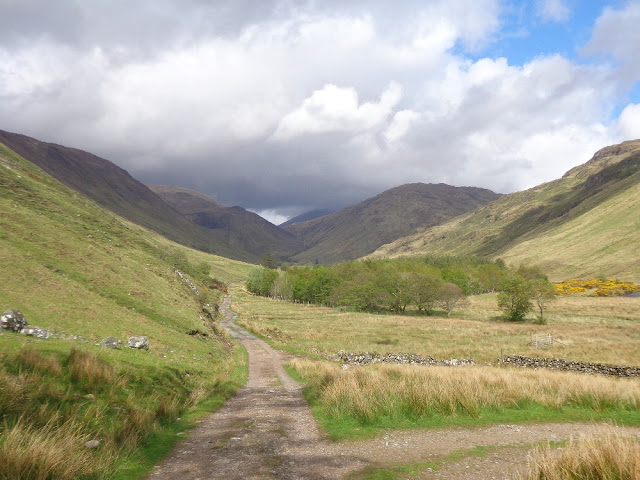 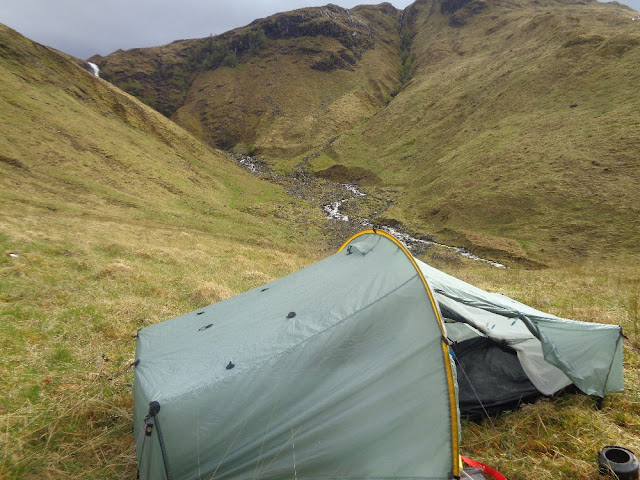 I'm not going to drag this out, but, basically, it rained a bit and the sun shone a bit and the Americans wandered off somewhere else, but I found a nice breezy camping spot on a knobble (apols for the technical geographical terms here) just at the entrance to Coire Easach. This is not necessarily where I was supposed to camp but I was damp and knackered and a dehydrated chicken biryani and a significant proportion of my whisky supply was taken to cheer me up a bit. The view was quite nice, though. 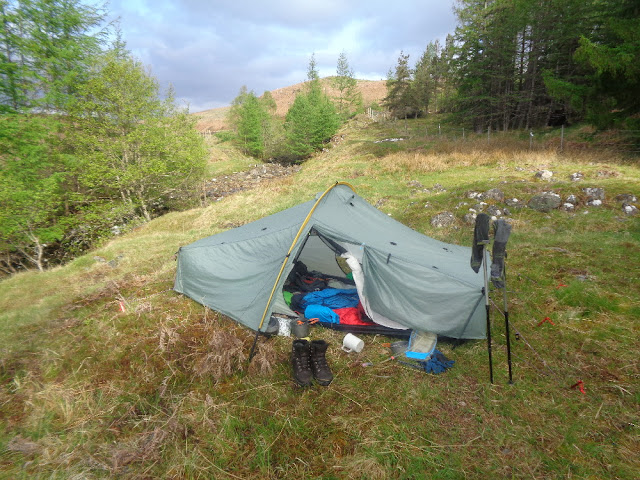 Just to say that the pics in this post won't really match the text. This doesn't bother me much and if it bothers you, I have to say that I'm not bothered.

Anyway, the next bit was a bit steep and quite wet in terms of the amount of precipitation precipitating on me, so I didn't take many pics anyway. After several hours of miserable slogging over some peat bogs through countryside which was probably quite pretty, I caught up with Sam and Ali and we splodged together as far as Altbeithe Youth Hostel which was closed. This cheered us up no end. However, the warden appeared and asked us if we'd like some tea. Then a resident appeared with some cakes. And as we shivered in the shelter of the North face of Altbeithe YHA, all seemed better with the world already. No, really....  So it rained some more and I sploshed on till I got to Loch Affric where some lads from somewhere or other were camping on their walk to somewhere else, so I erected JJ's tent by the loch shore and settle in for the night and a substantial amount of the next day. I was waiting for the weather to clear, see? Did it though? Did it buggery. So, wind-assisted, I continued through the afternoon, meeting a soggy Sam Hackett once again, but he put his tent up somewhere short of where I wanted to be and I put mine up on the edge of Glen Morriston. I wasn't bothered at all. Oh no... 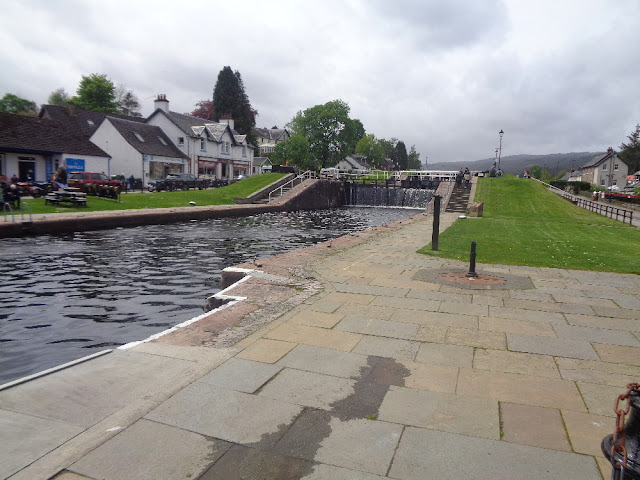 The sun came out. Oh no, was it going to be too hot? Would the fleshpots of Fort Augustus let me in if I admitted that I wasn't "doing" the Great Glen Way? Yes they would. I had a fair rehydrating session and a sweet potato sagaloo, straight out of the Hairy Bikers Go Veggie book and did some shopping before heading into the Monadhliath wind factory. I found a nice camping spot by a beck  burn and battered on through the forest of turbines up on to a hill that I realised I'd climbed once before by mistake. (Tip: Never admit this kind of thing if TGO vetters are reading) - and on to a lovely spot just a bit short of Laggan. It was here, apparently, that I adopted Terry, the tick. Terry was stuck to my right buttock, but traveled with me to Newtonmore unnoticed until I spotted it in the full-length mirror in the B&B, I won't explain why I was posing  taking some  much attention of the image in the mirror. Anyway, I thought that Terry was probably in need of some important life skills so I gave him a swimming lesson. With a flush. A small part of my gluteus maximus glowed pink for a bit.

Me and Terry pressed on towards Newtonmore, stopping only briefly for a sausage in a bun and some serious tea at the cafe at Laggan. They have a parrot, you know.

Newtonmore provided beer and some posh nosh and the company of Croydon and his daughter. And some shopping/ All was good. I wasn't bothered at all. 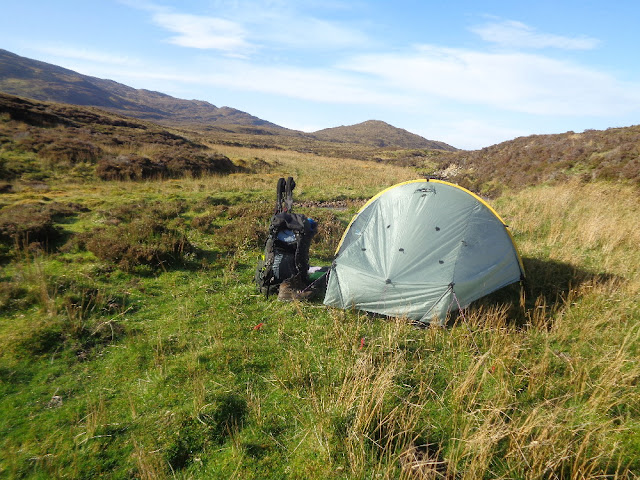 Moving right along - I went towards Phones. There are no phones at phones. It rained a bit and I found a little derelict bothy with some TGO challenge graffiti in it by Mick  Croydon and the late Pete Shepherd, bless him. The bothy seemed to be occupied by a nesting pair of chaffinches. I pressed on, crossing the River Tromie by paddling. bootless through deep and rushing water a few hundred metres North of a bridge I didn't know about. I wasn't all that bothered, though and marched on manfully, singing robust hiking songs whilst discreetly scratching the itchy red lump on my bum. (This is quite easy in a kilt by the way) I was confident that there would be no witnesses to this behaviour for miles and miles.... That night was the windiest so far and , sometime in the darkness (and there's not much of this in May), the wind ripped open the tent door and I got liberally sprayed with some very refreshing rain. I managed to wrestle it closed, though. 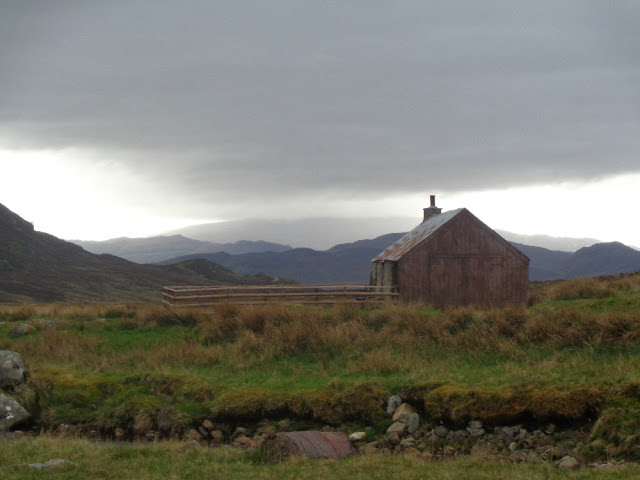 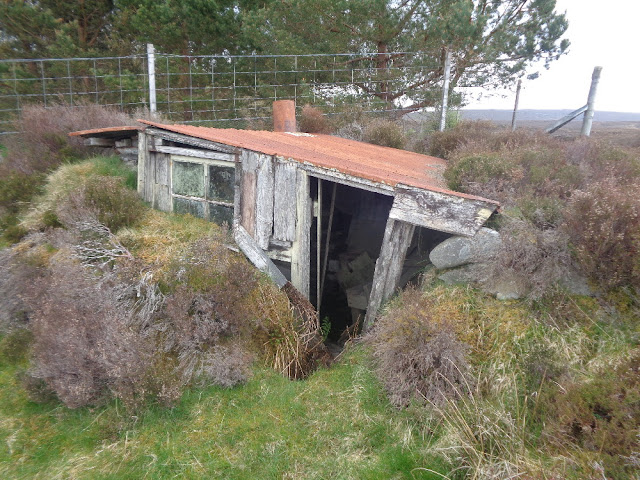 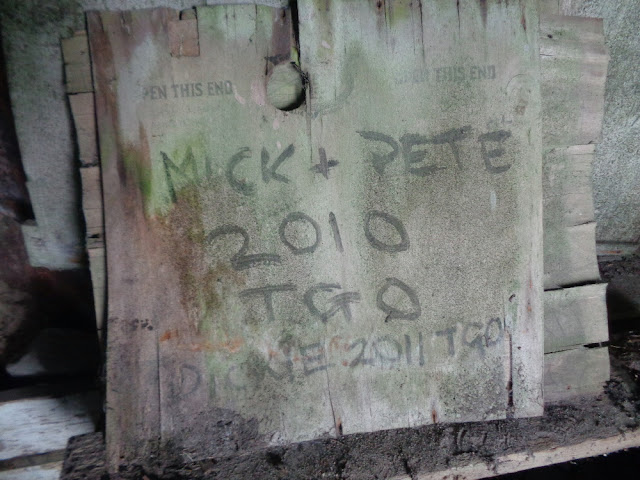 And then, in sunshine, I crossed the deep gash , confusingly called Mini-Gaig  (translates as "small buff") - confusing as there's another Minigaig not too far away. This one leads the unconcerned hiker into the upper reaches of the River Feshie. Its not very deep here, though. This is quite fabulous countryside and just the kind of place to wander through quite slowly, doing things such as sitting about, snoozing and listening to the river. It presents multiple fine camping places. Far too many camping places to be reasonable, as it happens and if I could be bothered, I'd probably write to somebody to complain that there's too much choice. 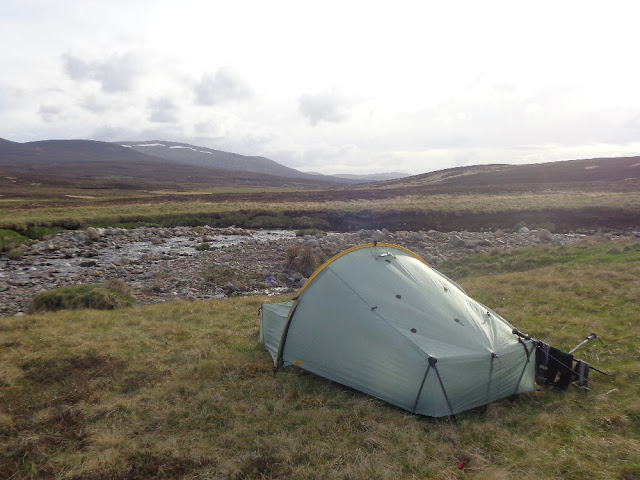 Anyway, I camped a mile or so East of Geldie Lodge in a breezy spot before bashing into Braemar for sausage and chips and beer via the tea and choccy biccies at Mar Lodge. Braemar had a lack of sausage and chips, though, in favour of some daft soup but Farquharsan's Bar provided reasonably priced beer and good scoff and, in the end, along with various other Challengers, a good night was had. And in the morning the bothy provided a good breakfast and fast service for the queue of hungry challengers. Other places in the village have sufferred from financial challenges, it seems. And fires...

So, full of a new set of fresh calories, I battered on once more, along by Gelder Shiel bothy and over the hump to Loch Muic, finding  a lovely, sheltered camping spot about a mile short of  Shielin of Mark bothy, which was my intended destination, but which sometimes can be a bit grim in grim weather. Not that there is any grim weather in Scotland in May. [koff] 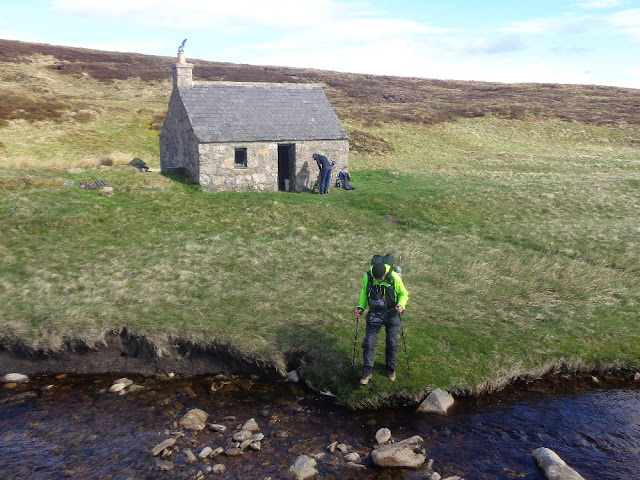 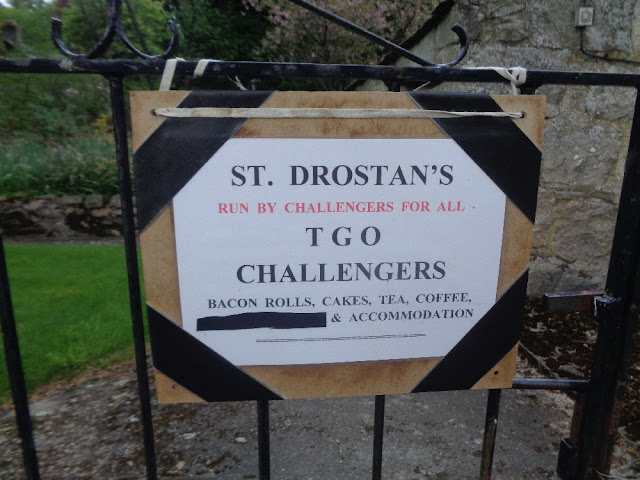 And so, sometimes solo and sometimes in company, I arrived, unconcerned at Tarfside where I swapped some money for tea and a bacon butty and camped quietly on the camping field, to the gentle beat of somebody's drum and bass, which seemingly repeated the same "tune" (ironic/sarcastic use of the word), until the early hours. My tip is never go to Tarfside at the weekend. The Mason's Arms was closed too, but I didn't care, really. 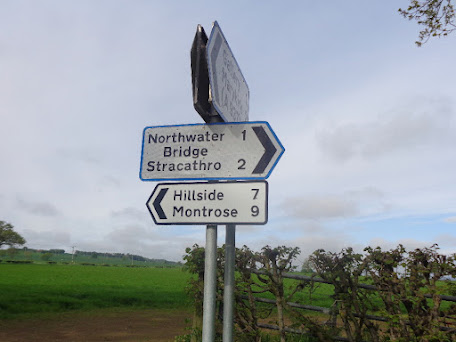 It was here that I changed my route. This was a "good decision"  and lead to meeting Sam once again in the Tuck Inn in Edzell where I ordered off the menu (that is to say, not on the menu) sausage egg chips and beans, bread and butter and lashings of tea. This was provided cheerfully and cheaply and was the absolute best scoff I'd had since my birthday last November. It cheered me up no end, in fact, to such an extent that I felt the need to celebrate in the Panmure Arms before pressing on to the campsite at North Water Bridge. The last few miles were of roads and occasional sea views where, once again I met Sam and we limped off to Charlton strawberrt farm where, in the tea-room they provided an egg butty and tea, with the strange addition of a strawberry. Its not too far to the sea from there, and not much further to the Park Hotel and the finish. That was my 17th TGO challenge.  Maybe I'll have another go....?  The buttock is much recovered by the way. 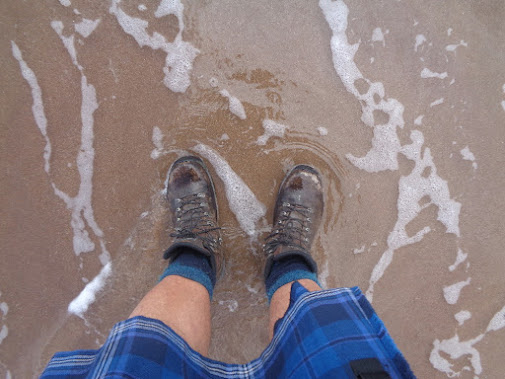 Thats what I thought, Martin. In fact I've still got it, and he's got mine. I'm struggling to get Ellis Brigham to replace the pole (its a known fault, apparently) They're co-operating superficially but are ponderously7 slow and have bad memories for whatever it was they promised the last time I emailed them. Mu advice is 1) Don't buy a sea to summit alto tr2 tent cos it will let you down if its windy and 2) If you do get one, don;t get it from Ellis Brigham cos their customer support is a bag of old dingo's kindneys (I also bought a kettle from them which failed to actually turn up at all in the first instance, but did eventually.

Whilst on the subject, I've had great trouble in replacing poles on Terra Nova tents. I won't be buying another one from them.
In contrast, our Nallo poles sometimes get bendy with old age. The first time this happened I went to see Josie at Alpenstock in Stockport. I was amazed when she didn't have to move from behind the counter. She just produced a spare pole as if it were a magic wand, and she did the same from time to time subsequently. Hilleberg clearly recognise that poles can suffer fatigue (always carry a spare!), and they will replace them, albeit no longer through Josie in Stockport as she has retired.
I haven't used a tent this year - family stuff has intervened - but I've recently managed to do the Dales High Way in luxury using a day sack, which was rather pleasant...
Hoping all is well at Pie Towers.
M

Kilted hiker, you are impressive. Our much loved 25++ years old Lowland tent has few/none of the original sticks left but this year the bottom has started leaking and we got soft.
But Not Bothered and Unconcerned, thanks for the inspiration to get back out there. Time to look for a solution!